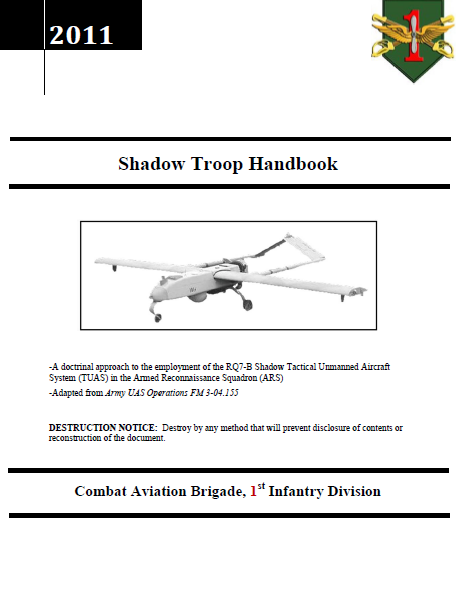 1-2. The UAS supports the full spectrum capability through augmenting all warfighting functions:

a. Movement and Maneuver: Provides the full depth of the reconnaissance and security missions in order to aid the ground commander in movement of friendly forces and provide the ground forces with freedom to maneuver.

b. Intelligence: The Shadow Troop provides Near Real Time (NRT) intelligence, surveillance, and reconnaissance (ISR) and extends the capability through flexible RSTA platforms as an organic asset to the ARS and CAB commanders. They greatly improve the situational awareness of the ARS and aid in employing the Scout Weapons Team (SWT) in high threat environments.

c. Fires: Coupling the Communication Relay Package (CRP) with the Laser-Designating (LD) payload, the Shadow aids in all levels of the Decide, Detect, Deliver, and Asses cycle.

d. Protection: Through continuous reconnaissance, the Shadow Troop can significantly increase the force protection in and around secure operational bases.

e. Sustainment: The Shadow provides reconnaissance and security along supply routes and logistics support areas. Using the CRP, the Shadow can talk directly to the convoy commander for immediate reaction.

f. Command and Control: The Shadow greatly increases the ARS commander’s ability to control the fight. The CRP package extends radio transmission ranges to 240 kilometers. With proper TTPs, the Shadow can serve as an emergency re-transmitting capability to isolated personnel.

1-3. The Shadow Troop aids the ARS and CAB commanders through the full spectrum of operations from stable peace to general war:

b. Limited Intervention: Provides search for evacuation operations, security for strike and raid operations, foreign humanitarian assistance (search of survivors during disaster relief), and searching for weapons of mass destruction.

2-6. OSGCS positioning is critical to successful employment of UAS. The OSGCS provides the technical means to receive UA sensor data. The unmanned aircraft operator, PO, and MC assigned to the OSGCS provide tactical and technical expertise to facilitate UAS operations. The CAB commander advises the division commander on placement of this critical UAS component to maximize its effectiveness. The CAB, BFSB, Fires brigade, and BCT conduct disparate missions simultaneously across the division area of operation, with different TTP, focus, and skill sets required. This requires integration of overall aviation operations at division-level to avoid redundancy of effort. An additional consideration is the Shadow platoons in the IBCT BSTBs and the OSGCSs that remain in their control. With a cohesive ATP relationship built between the IBCT Shadow platoons and the ARS Shadow Troop, direct support missions to the IBCT in an extended range environment can be controlled by the IBCT Shadow operators, POs, and MCs.

3-22. Area reconnaissance gathers intelligence or conducts surveillance of a specified area. This area may be key terrain or other features critical to an operation. Similar to a route reconnaissance, the TUAS may conduct an area reconnaissance autonomously or in a MURT.

3-23. The autonomous area reconnaissance will focus outwards and move into the objective area. The flanks of the overall objective area are secured; then, reconnaissance efforts are focused inward. UAS may establish a screen on the flank to provide security for ground forces, if used.

3-24. The MURT will use the Shadow to continue reconnaissance efforts on any terrain that can influence the given objective area while the SWT moves inward towards the main objective area. This provides NRT intelligence on any changes or significant activities during the conduct of the reconnaissance.

3-26. UAS surveillance of base camps, airfields, and key logistic sites in lesser-contested areas may free combat forces to perform other missions and help prevent surprise.

3-27. The TUAS provides easily maintained and lower detectable aerial surveillance to the ARS and CAB commander to help develop the commander’s intent and concept of the operation. The Shadow Troop provides 24 hour coverage for an NAI in order to: