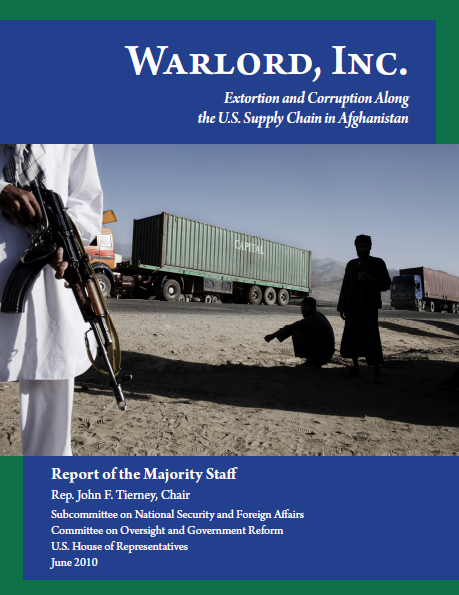 Subcommittee on National Security and Foreign Affairs, Committee on Oversight and Government Reform

1. Security for the U.S. Supply Chain Is Principally Provided by Warlords. The principal private security subcontractors on the HNT contract are warlords, strongmen, commanders, and militia leaders who compete with the Afghan central government for power and authority. Providing “protection” services for the U.S. supply chain empowers these warlords with money, legitimacy, and a raison d’etre for their private armies. Although many of these warlords nominally operate under private security companies licensed by the Afghan Ministry of Interior, they thrive in a vacuum of government authority and their interests are in fundamental conflict with U.S. aims to build a strong Afghan government.

2. The Highway Warlords Run a Protection Racket. The HNT contractors and their trucking subcontractors in Afghanistan pay tens of millions of dollars annually to local warlords across Afghanistan in exchange for “protection” for HNT supply convoys to support U.S. troops. Although the warlords do provide guards and coordinate security, the contractors have little choice but to use them in what amounts to a vast protection racket. The consequences are clear: trucking companies that pay the highway warlords for security are provided protection; trucking companies that do not pay believe they are more likely to find themselves under attack. As a result, almost everyone pays. In interviews and documents, the HNT contractors frequently referred to such payments as “extortion,” “bribes,” “special security,” and/or “protection payments.”

3. Protection Payments for Safe Passage Are a Significant Potential Source of Funding for the Taliban. Within the HNT contractor community, many believe that the highway warlords who provide security in turn make protection payments to insurgents to coordinate safe passage. This belief is evidenced in numerous documents, incident reports, and e-mails that refer to attempts at Taliban extortion along the road. The Subcommittee staff has not uncovered any direct evidence of such payments and a number of witnesses, including Ahmed Wali Karzai, all adamantly deny that any convoy security commanders pay insurgents. According to experts and public reporting, however, the Taliban regularly extort rents from a variety of licit and illicit industries, and it is plausible that the Taliban would try to extort protection payments from the coalition supply chain that runs through territory in which they freely operate.

4. Unaccountable Supply Chain Security Contractors Fuel Corruption. HNT contractors and their private security providers report widespread corruption by Afghan officials and frequent government extortion along the road. The largest private security provider for HNT trucks complained that it had to pay $1,000 to $10,000 in monthly bribes to nearly every Afghan governor, police chief, and local military unit whose territory the company passed. HNT contractors themselves reported similar corruption at a smaller scale, including significant numbers of Afghan National Police checkpoints. U.S. military officials confirmed that they were aware of these problems.

5. Unaccountable Supply Chain Security Contractors Undermine U.S. Counterinsurgency Strategy. While outsourcing principal responsibility for the supply chain in Afghanistan to local truckers and unknown security commanders has allowed the Department of Defense to devote a greater percentage of its force structure to priority operations, these logistics arrangements have significant unintended consequences for the overall counterinsurgency strategy. By fueling government corruption and funding parallel power structures, these logistics arrangements undercut efforts to establish popular confidence in a credible and sustainable Afghan government.

The following companies are prime contractors under the HNT contract:

NCL Holdings (NCL) – NCL was founded in May 2005 by Hamed Wardak, the son of the Afghan Defense Minister, Abdul Rahim Wardak. The company is based in Northern Virginia. Prior to receiving the HNT contract in 2009, NCL performed security operations in Afghanistan for Department of Defense contractors. NCL subcontracts out all of its trucking operations under HNT, and had no direct experience with managing trucking before this contract.

HEB International Logistics – HEB is an international logistics and transportation company based in Dubai. HEB owns some of its own trucks but principally relies on local Afghan subcontractors. HEB performed trucking operations under the BPA prior to receiving the HNT contract.

Anham, LLC – Anham is a partnership that was formed in 2004 by a Virginia-based investment group (HII-Finance), a Saudi conglomerate, and a Jordanian investment group. It is based in Dubai. Anham owns its own trucks and does not subcontract to local companies, but it performs far fewer missions than the leading HNT contractors.

Afghan American Army Services (AAA) – AAA is Afghan-owned and was added to the HNT contract in November 2009 following a bid protest before the U.S. Government Accountability Office. AAA had previously worked under the BPA and had performed trucking operations since July 2006. Under HNT, AAA subcontracts out trucking operations to several local companies.

Guzar Mir Bacha Kot Transportation (GMT) – GMT is an Afghan-owned company that was added to the HNT contract in November 2009 in order to increase trucking capacity. GMT was a prime contractor on the BPA and the company has provided trucking services in Afghanistan for more than 15 years. GMT provides its own trucks and, before receiving the HNT contract, worked as a subcontractor for other HNT prime contractors.