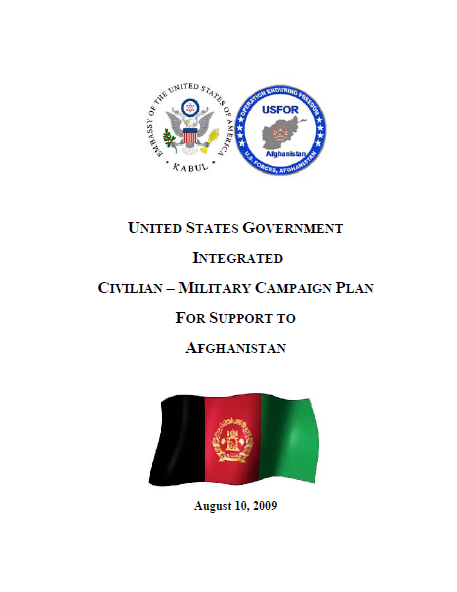 The Integrated Civ-Mil Campaign Plan for Afghanistan provides guidance from the U.S. Chief of Mission and the Commander of U.S. Forces-Afghanistan to U.S. personnel in Afghanistan. The Plan represents the collaborative effort of all the USG Departments and Agencies operating in Afghanistan and the range of different equities, resources, and approaches. The Plan is based on close collaboration with the International Security Assistance Force (ISAF) as well as the United Nations Assistance Mission in Afghanistan (UNAMA) and partner nations to build effective civilian and military mechanisms for integrated assistance. But its most important component is a strong partnership with the Government of the Islamic Republic of Afghanistan (GIRoA) that will build the capacity needed to provide Afghanistan with a stable future. The ultimate goal is for the GIRoA to have full responsibility for its own security and administration as the international community continues to offer economic assistance, training, and other non-combat support for the continued development of the country.

USG efforts must focus on the people of Afghanistan. Our every action must help secure,
mobilize and support the Afghan people and their government to defeat the insurgency and establish
effective governance. Shifting our focus to the Afghan population requires the integrated, synchronized
efforts of our civilian and military teams working across Security, Development, Governance, and
Information in new, comprehensive ways. Through integrated teams across Afghanistan, resources and
personnel will be applied against 11 areas of Counter-insurgency (COIN) “Transformative Effects.” We
have identified strategies in each of the areas to transform the situation in Afghanistan. The strategies
outline the actions necessary to improve population security and reduce insurgent capability while
advancing governance to include elections; providing increasing access to justice; promoting
reintegration; increasing jobs and agricultural opportunity; countering the nexus of drugs, crime and
insurgent activity; facilitating border management; and controlling the communications “space.”

As we move forward in the execution of this Campaign Plan, the following core principles should be
followed:

• Afghan Leadership, Afghan Capacity, Afghan Sustainability. Our efforts in Afghanistan must be
designed, at all times, to assist the Afghan government to assume a more effective leadership role.

• Action is Required at All Levels. We must increase our focus on sub-national levels where the
insurgency draws strength through coercion and exploiting people’s dissatisfaction with their
government and local conditions. We will focus on communities to drive a wedge between the
insurgents and the people and give the people the freedom and a reason to support the Afghan
government. At the same time, we will continue to invest in critical infrastructure and service
delivery systems critical to the development of sustainable national governance and economic
growth. Our efforts must be balanced in order to ensure capacity is built to be sustainable and
mutually supporting from the local village to the provincial center to Kabul.

• Unity of Effort Comes Through True Integration. Multi-level integrated planning and operations
between civilian and military components must be designed to assist Afghanistan. In Kabul, the
Embassy and civ-mil working groups will organize along functional lines. For example, all
agriculture officials will be in a single integrated agriculture office without agency separations. This
will require a change in practice and thinking. In the field, civ-mil teams will organize effectively
at the district, provincial, and regional level to implement the COIN mission and reduce “stovepiping.”
Additionally, our civilian structures will be reorganized to achieve more coherent civ-mil
integration.

• The International Community is a Key Partner. Our success in Afghanistan depends on our close
collaboration with our allies in ISAF and our friends in UNAMA in promoting our goals.
Afghanistan is also benefiting from the significant contributions of other governmental and nongovernmental
members of the international community. The international circle of support for
Afghanistan, should continue to expand with assistance from the USG. This requires an agreement
on how to bring together USG COIN objectives with the approach of many international partners in
a mutually supportive and sequenced manner.

• Giving Guidance, Resources and Authority at the Right Levels. We will focus more of our tools
and resources at the sub-national level to allow our civilian and military teams in the field, working
in partnership with the Afghan people, to lead security, reconstruction and governance initiatives.
This effort should be directed at restoring peace and security to Afghanistan from the bottom-up.

• Progress must be Visible and Measurable. Showing tangible progress to the Afghan population
and the international community is crucial, particularly in the short-term. We will use clear criteria
for gauging this progress against clear goals and measuring success to help us properly allocate
resources to ongoing initiatives, and reassess our strategy in a timely manner.

• Accountability and Transparency. Our actions must embody and foster accountability and promote
good government. This means holding ourselves and GIRoA to high standards and best practices in
any agreement that we negotiate with the GIRoA and other partners. We must ensure our assistance
does not feed corruption or abuse of power in the government or among our partners in the field.

We must also avoid close association with corrupt officials and institutions in the eyes of the people
and use our leverage to change the behavior of those who seek personal gain over service to the
Afghan people. The USG should set a standard for transparency, by ensuring our own processes are
above reproach and by working hard to encourage the GIRoA to demonstrate a clear commitment
to fight corruption and to provide the Afghan people with access to justice.

In the coming year our greatest effort will be focused in southern Afghanistan where deployment of
additional military and civilians resources will target the insurgency at its heart, in Helmand and
Kandahar provinces. Securing the most unstable provinces will have a cascading impact on the rest of the
country. The eastern part of Afghanistan will be our second priority area of focus. Efforts in both areas
will work to protect the population and create space for previously isolated communities and the
government to put in place effective local governance, develop the local economy and revive agriculture.
The integrated effort will evolve to reflect the necessities of the ISAF military Campaign Plan
which will continue to be adjusted based on the changing security situation and available resources. Our
ongoing multi-level push to turn the tide in Afghanistan will require continuous assessment of our plans
and resources with required shifts in programs, staffing and force laydown to meet changing needs. It
also requires a commitment to provide military commanders and civilians on the ground with the resources they need to execute the President’s strategy. This is based on a strong recognition that the
effort in Afghanistan to date has lacked unity of effort and the resources for success.
The U.S. Embassy has put forward comprehensive budget and personnel requirements for the
mission through separate channels. ISAF and USFOR-A recommendations on the military requirements
to support the integrated campaign are included in reports to the Secretary of Defense and Secretary
General of NATO.

Since the majority of U.S. military forces are under International Security Assistance Force
(ISAF) control, successful execution of a civ–mil effort requires close coordination between USG civilian
elements and ISAF. U.S. Embassy Afghanistan (USEMB-A) with the support of USFOR-A will assess
progress on the Civ-Mil Campaign Plan on a quarterly basis, in close coordination with ISAF. This
integrated assessment process will provide decision-makers in Afghanistan with information necessary to
prioritize and direct allocation of resources and efforts and inform Washington. This plan will be
reviewed no later than 6 months and revised in 1 year, although we also anticipate there may need to be
adjustments throughout the year as we put the President’s new strategy in action.

The U.S. broad strategic goal in Afghanistan is to disrupt, dismantle, and eventually defeat Al-Qaeda
(AQ), its allies and its safe havens in Pakistan, and to prevent their return to Pakistan or Afghanistan.

In order to make progress against this goal in the next three years, the USG will:

1. Promote a more capable, accountable, and effective government in Afghanistan that serves the
Afghan people and can eventually function, especially regarding internal security, with limited
international support.

The following Plan provides guidance from the U.S. Chief of Mission and the Commander of U.S.
Forces-Afghanistan to U.S. personnel on how to execute this mission over the next three years. It focuses
in detail on the next 12-18 months as a critical window for demonstrating measurable progress to the
Afghan people and to the international community.

This plan directs the prioritization of USG efforts and resources and identifies areas of significant
cooperation with GIRoA, ISAF, UNAMA, and other members of the international community. While
ISAF forces are referenced, this plan does not presume to direct ISAF, non-U.S. PRTs, or U.S. forces
under ISAF, or of course other donors. Rather, to achieve the objectives in this plan, it will be
synchronized with the ISAF military campaign plan, subsequent military orders, ISAF Regional
Command plans and orders, and the plans of international counterparts. In addition to President Obama’s
strategy and supporting USG policy, the plan draws on guidance from the Afghan National Development
Strategy, the Afghanistan Compact, and NATO Operational Plans. 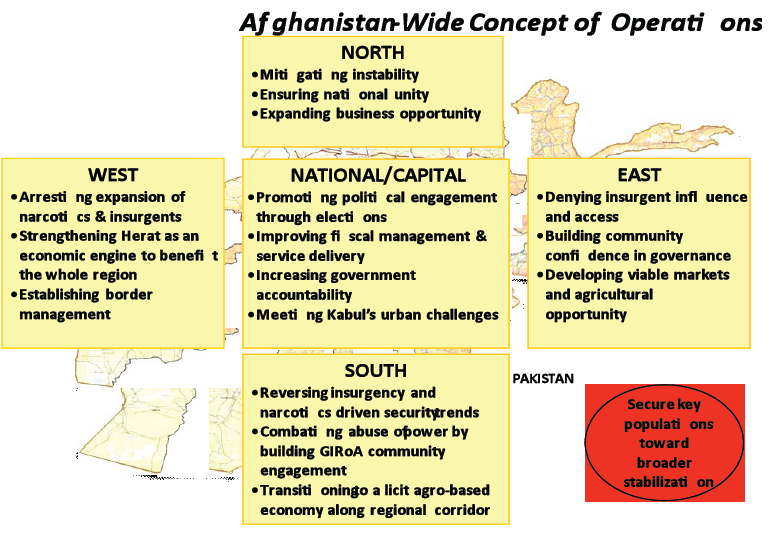 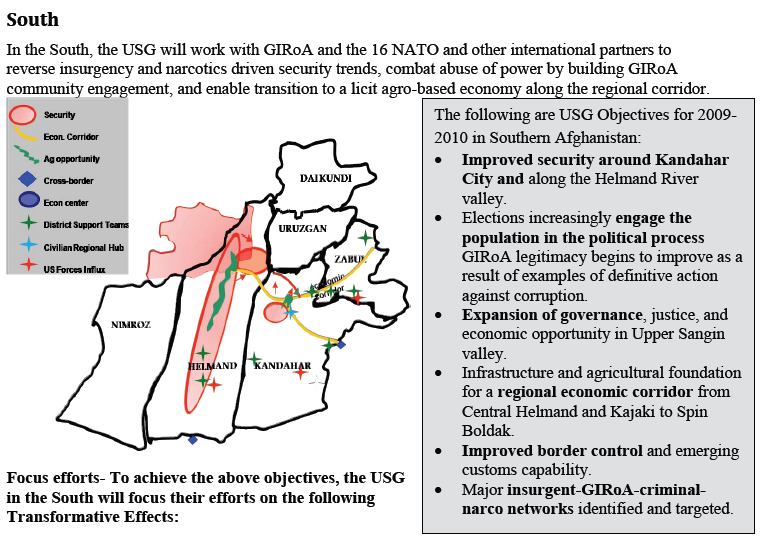