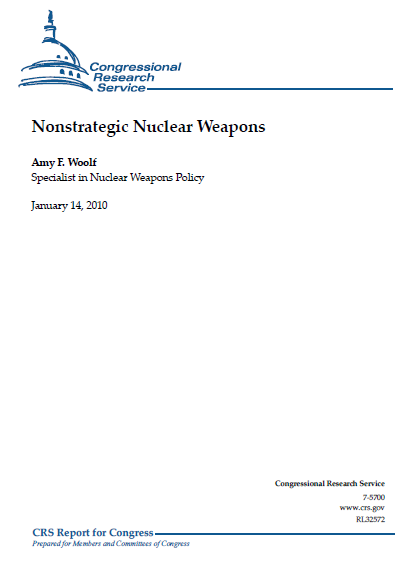 Some argue that these weapons do not create any problems and the United States should not alter
its policy. Others, however, argue that the United States should reduce its reliance on these
weapons and encourage Russia to do the same. Many have suggested that the United States and
Russia expand efforts to cooperate on ensuring the safe and secure storage and elimination of
these weapons, possibly by negotiating an arms control treaty that would limit these weapons and
allow for increased transparency in monitoring their deployment and elimination. Others have
suggested that any potential new U.S.-Russian arms control treaty count both strategic and
nonstrategic nuclear weapons. This might encourage reductions or the elimination of these
weapons. The 111th Congress may review some of these proposals.

The Distinction Between Strategic and Nonstrategic Nuclear Weapons

Directed against one or more of a selected series of enemy targets with the purpose of
progressive destruction and disintegration of the enemy’s warmaking capacity and will to
make war. Targets include key manufacturing systems, sources of raw material, critical
material, stockpiles, power systems, transportation systems, communication facilities, and
other such target systems. As opposed to tactical operations, strategic operations are
designed to have a long-range rather than immediate effect on the enemy and its military
forces.
In contrast, the tactical use of nuclear weapons is defined as “the use of nuclear weapons by land,
sea, or air forces against opposing forces, supporting installations or facilities, in support of
operations that contribute to the accomplishment of a military mission of limited scope, or in
support of the military commander’s scheme of maneuver, usually limited to the area of military
operations.”