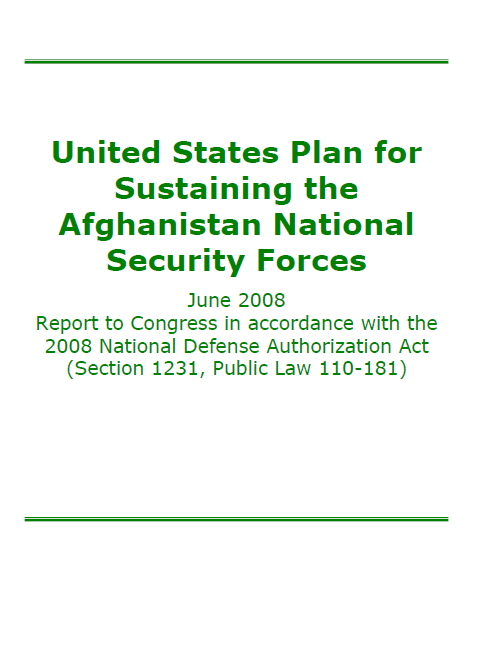 This report to Congress is submitted consistent with Section 1231 of the National Defense Authorization Act for Fiscal Year 2008 (Public Law 110-181). It includes the United States plan for sustaining the Afghanistan National Security Forces (ANSF). In accordance with subsection (a), it includes a description of the long-term plan for sustaining the ANSF, with the objective of ensuring that the ANSF will be able to conduct operations independently and effectively and maintain long-term security and stability in Afghanistan. The report includes a comprehensive strategy and budget, with defined objectives; mechanisms for tracking funding, equipment, training, and services provided to the ANSF; and any actions necessary to assist the Islamic Republic of Afghanistan to achieve a number of specified goals and the results of such actions. This report is the first of the annual reports required through 2010 on the long-term plan for Afghanistan. Consistent with this Act, this report has been prepared in coordination with the Secretary of State. This assessment complements other reports and information about Afghanistan provided to the Congress; however, it is not intended as a single source of all information about the combined efforts or the future strategy of the United States, its international partners, or Afghanistan.

Developing the Afghan National Security Forces (ANSF), which includes both the Afghan National Army (ANA) and Afghan National Police (ANP), is one of the United States’ top priorities in Afghanistan. The purpose of the ANSF development program is to grow the capacity and capability of the ANSF in line with internationally agreed benchmarks solidified in the 2006 Afghanistan Compact. The desired end state is a professional, capable, respected, multi-ethnic ANSF, with competent ministries and staffs and sustaining institutions, capable of directing, planning, commanding, controlling, training and supporting the ANSF.

The capabilities of the Afghan National Army (ANA) are improving steadily. The ANA has taken the lead in more than 30 significant operations and has demonstrated increasing competence, effectiveness and professionalism. On February 5, 2008 the Joint Coordination and Monitoring Board (JCMB) approved a proposal to expand the authorized end-strength of the ANA from 70,000 to 80,000 personnel. The current program calls for a light infantry force of 15 brigades, including artillery, armor, commando, combat support, combat service support, an air corps, and the requisite intermediate commands and sustaining institutions. The long-term ANA posture may also include a more robust ANA Air Corps capability and a larger force.

The Afghan National Police (ANP) force is making steady progress, but its capabilities still lag behind those of the ANA. The current ANP force has not been sufficiently reformed or developed to a level at which it can adequately perform its security and policing mission. However, the Afghan and U.S. governments, and our international partners, recognize the shortcomings and are working to improve ANP capabilities. The target for the ANP is to build a reformed force of 82,000 personnel that is capable of operating countrywide. The Afghan Ministry of the Interior is instituting rank and salary reforms to ensure that qualified officers remain on the force and achieve the rank and salary that they deserve. The new Focused District Development (FDD) plan, which began being implemented in late 2007, shows promise. The FDD withdraws the locally-based Afghan Uniform Police (AUP) from selected districts, replacing them temporarily with highly trained and effective Afghan National Civil Order Police (ANCOP). The AUP then receive two months of immersion training and equipping in a concentrated program of instruction. The goal of the FDD program is for the AUP to return to their home districts with increased professional capability and confidence to enforce the laws of their country.

An independent, capable Afghan National Army (ANA) and Police (ANP) are critical to our counter-insurgency (COIN) efforts, and to establishing the security environment that will allow Afghanistan to become an economically prosperous, moderate democracy. It is crucial that the United States and our international partners dedicate the necessary resources and personnel to ensure that the mission to develop the ANSF is a success.