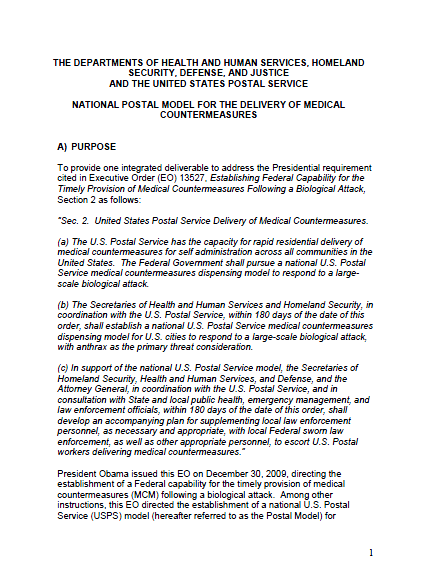 NATIONAL POSTAL MODEL FOR THE DELIVERY OF MEDICAL COUNTERMEASURES

To provide one integrated deliverable to address the Presidential requirement cited in Executive Order (EO) 13527, Establishing Federal Capability for the Timely Provision of Medical Countermeasures Following a Biological Attack, Section 2 as follows:

(b) The Secretaries of Health and Human Services and Homeland Security, in coordination with the U.S. Postal Service, within 180 days of the date of this order, shall establish a national U.S. Postal Service medical countermeasures dispensing model for U.S. cities to respond to a large-scale biological attack, with anthrax as the primary threat consideration.

(c) In support of the national U.S. Postal Service model, the Secretaries of Homeland Security, Health and Human Services, and Defense, and the Attorney General, in coordination with the U.S. Postal Service, and in consultation with State and local public health, emergency management, and law enforcement officials, within 180 days of the date of this order, shall develop an accompanying plan for supplementing local law enforcement personnel, as necessary and appropriate, with local Federal sworn law enforcement, as well as other appropriate personnel, to escort U.S. Postal workers delivering medical countermeasures.”

President Obama issued this EO on December 30, 2009, directing the establishment of a Federal capability for the timely provision of medical countermeasures (MCM) following a biological attack. Among other instructions, this EO directed the establishment of a national U.S. Postal Service (USPS) model (hereafter referred to as the Postal Model) for residential delivery of MCM following a biological attack as quoted above. This Postal Model is one potential option that States or Municipalities could consider as a supplemental method for rapid MCM distribution.

1. Scope of the Problem

In the event of a large-scale outdoor release of an antibiotic-susceptible biohazard, such as B. anthracis, antibiotic prophylaxis will need to be delivered to the potentially exposed population within a short time frame, ideally within 48 hours of exposure, to avert the onset of disease. Scenarios placing large numbers of people at risk for infection could potentially overwhelm the capacity of SLTT authorities to respond via their traditional response modalities within the necessary time frame. Postal Model operations are based on the underlying CRI scenario – initial prophylaxis to the entire population of a large geographic area within 48 hours of the decision to deploy SNS medications.

In light of these concerns, the USPS could provide for distribution and delivery of antibiotics to residential addresses in affected metropolitan areas during the initial stages of such an event. The sudden and catastrophic nature of such an event may warrant this departure from normal public health and medical practice. These procedures would be planned for in advance of an event, and would augment, not replace, other local dispensing plans. Local public health Point of Dispensing (POD) locations will also dispense initial starter packs as well as supplemental resupplies of antibiotics in the affected area. Jurisdictions desiring a fully capable Postal Plan response are required to engage in SLTT planning with the cooperating Federal agencies to prepare venue-specific Postal Plans to ensure coordination across emergency response mechanisms.

The task for the USPS is to deploy USPS carrier volunteers to deliver antibiotics to residents at the outset of a catastrophic incident, using the inherent efficiency of the USPS infrastructure. The Postal Model is intended to provide a quick-strike mechanism to supplement existing dispensing plans that may require additional activation and preparation time to deploy. To achieve the EO’s objective in this regard, and for a number of ancillary funding, recruitment, and training reasons, anything beyond residential MCM delivery falls outside of the approved scope of the Postal Model, including: