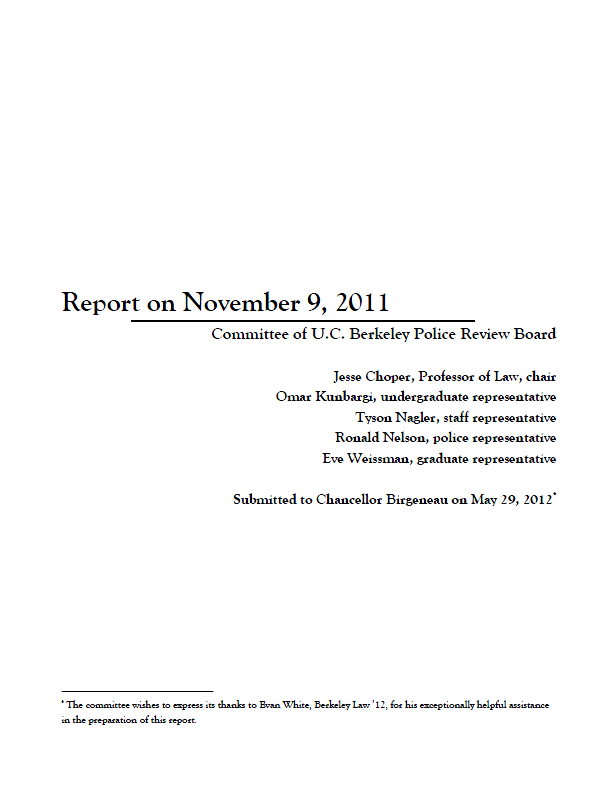 Committee of U.C. Berkeley Police Review Board Report on November 9, 2011

On the morning of November 9, 2011, thousands of students, faculty, staff, and community members gathered for a noontime rally in Sproul Plaza. Protestors voiced their opposition to a variety of issues including recent tuition increases and state cuts to public education, and their support for the Occupy movement, which began in New York City a few months prior. In the early afternoon, hundreds of protestors convened a “General Assembly,” in which they voted to set up tents near Sproul Hall. The first tents to be erected in the grassy area near Sproul Hall were quickly removed by campus police without incident.

Two later incidents in this same area, however, one in the mid-afternoon and one at night, involved the use of force by police against large numbers of protesters. Around 3 p.m., another set of tents was erected. In an effort to remove the tents, the police used batons and other means of force to move protestors that were locking arms and blocking access to the tents. After tense interaction with protesters, the police removed this second set of tents and withdrew to their command post in the basement of Sproul Hall. During this period, six individuals were arrested and more were injured and in some instances handled roughly.

Later, another set of tents was erected in the same area. Around 9:30 p.m. the police again used batons and other means of force against protesters to obtain access to and remove the tents. During this period, thirty-two individuals were arrested and more were injured or handled roughly. After removing this third set of tents, the police set up a perimeter around the grassy area to prevent further tents from being erected at that site, although a number of protestors stayed on Sproul Plaza throughout the night.

A few days after these incidents, Chancellor Birgeneau asked the Police Review Board (PRB) to review the events of that day, to the best of their ability determine what happened, and to assess whether the conduct of the police was consistent with the norms of the Berkeley campus and established campus policies. While a review of this breadth is not the regular business of the PRB, complying with the Chancellor’s request is within the stated mission of the Board. Given limitations of time and resources, the PRB limited its review of November 9’s events to the two primary confrontations regarding tent encampments summarized above, as well as the communications and actions by protesters, UCPD, and the campus leadership directly associated with those confrontations.

Nearly all of the incidents described took place in or near the patch of grass tucked into Sproul Hall’s northwestern elbow (hereinafter “the Corner”) (point A, in Appendix A). At around 3 p.m., the first set of tents was erected to the northwest of Mario Savio Steps, just south of the tree in the Corner. Only one tent is captured on video, but there are conflicting reports about the presence of other tents. It is clear from the video that the tent(s) were taken down by UCPD officers with relatively little resistance from protestors. Three officers approached from the northwest and threaded their way through the crowd. They wore normal uniforms with no helmet or face shield and with their batons sheathed at their sides. As they disassembled the tent, protestors surrounded them and yelled “shame on you.” Two protestors had their hands on the tent as it was being disassembled, perhaps in an effort to recover it after it was taken down, but the police easily removed those hands. The officers walked the tent out the way they came as the protestors booed them. None of the protestors made any threatening gestures towards the police, nor substantially interfered with their actions.

A short while later, a second set of tents was erected just southeast of the tree. The protestors tightly packed the entire grassy area around the tents, making it difficult to gain access to the tents. Video shows that officers, again in normal uniforms, attempted to reach the tents from a position along the north and east sides of the Corner, but there were too many protestors, and the police instead withdrew to UCPD headquarters in the basement of Sproul Hall. The tents soon spread to cover the northeastern portion of the Corner (point B, Appendix A). The protestors filled nearly the entire area around the tents, blocking access along the hedges to the north, from the base of Mario Savio Steps to the south, and Sproul Plaza to the west and south (yellow area, Appendix A).

Around this time, the UCPD issued at least three warnings to the crowd. Two were issued from the north of the protestors, near the tree at the far northwest end Sproul Hall (near point C, Appendix A). One warning was given with a bullhorn, and declared that the gathering was an “unlawful assembly.” The officer said, “I demand all those at this location to immediately disperse.” The same officer also gave the second warning from the north. He first attempted the announcement with a bullhorn, but, because he was drowned out by the crowd, the protestors encouraged the officer to use the “human microphone,” in which his statements would be repeated by the crowd. He agreed and stated the following: “Please be advised that camping on UC property is illegal. Please remove your tents now.” Because this announcement was amplified by the human mic, it is likely that a greater portion of the assembled students heard it. The protestors responded with a loud “No!,” also amplified with the human mic. The officer walked away as the crowd cheered.

The same officer gave the third warning, very similar to the first, from Mario Savio Steps. The officer used a bullhorn and informed the protestors that they were unlawfully assembled and demanded the dispersal of those grouped “at the west side of Sproul Hall.” He then said that those who remained would be “subject to arrest.” In response, the protestors asked the officer what law he was using to declare the assembly unlawful. The officer advised the students that “setting up a campsite like this is considered camping, and camping is unlawful on UC property.” The protestors then responded that they were not camping, but rather standing next to empty tents. They started chanting, “We are standing!” The officer responded that they should tell the people who are putting up the tents to take them down.

There is conflicting evidence regarding whether or not the UCPD effectively communicated its intentions to the crowd. Before the afternoon and evening confrontations, the police made multiple announcements to protestors that the encampments were unlawful and that the police would arrest those who interfered with their efforts to clear the tents. Videos show that, in addition to the police warnings, at least three protestors addressed the crowd in the minutes leading up to the afternoon confrontation and specifically mentioned the possibility of arrest.

At one point another student announced over the human microphone “that even though we know the risks involved, we are standing our ground,” a statement which was followed by cheers. Another video shows a protestor using a bullhorn to state a telephone number for people to call if they are arrested. On the other hand, several protestors stated at the open hearings that they could not hear the dispersal orders of the police, and videos show that protestors may have been confused about exactly what law they were violating. It seems unlikely that the protestors assembled in the Corner were not aware that they were defying police orders in setting up and protecting the tents.

The Brazil Report suggested that “when police wear riot gear they raise levels of fear and suspicion in the crowd” and recommended to “try to avoid formations or modes of movement or ways of doing things that seem overly militaristic or rigid” because it may “inflame demonstrators’ emotions and needlessly provoke hostile reactions.” The Brazil Report acknowledged that the UCPD is far more expert in matters of crowd control than outside reviewers. Equipment-related decisions are complex and account for the officers’ safety as well as the crowd’s reaction. Still, the Brazil Report’s judgment about equipment such as types of batons and riot gear deserves careful consideration by the PRT.

The Brazil Report also mentioned that guns that shoot rubber projectiles “look to the untutored eye like machine guns [s]o their visible presence, by itself, can intensify reactive emotions and invite erroneous inferences about the measures to which the police are prepared to resort.” While no such gun was fired on November 9, they were present, prompting changes of “Put the guns down!” from protestors.62 The visual impact of these weapons should concern the PRT, as informed by the Edley-Robinson Report, in the future.