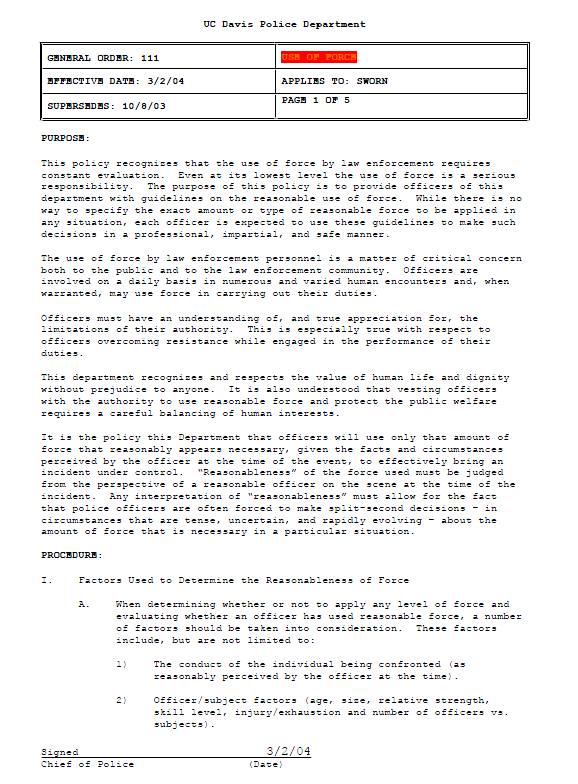 This policy recognizes that the use of force by law enforcement requires constant evaluation. Even at its lowest level the use of force is a serious responsibility. The purpose of this policy is to provide officers of this department with guidelines on the reasonable use of force. While there is no way to specify the exact amount or type of reasonable force to be applied in any situation, each officer is expected to use these guidelines to make such decisions in a professional, impartial, and safe manner.

The use of force by law enforcement personnel is a matter of critical concern both to the public and to the law enforcement community. Officers are involved on a daily basis in numerous and varied human encounters and, when warranted, may use force in carrying out their duties.

Officers must have an understanding of, and true appreciation for, the limitations of their authority. This is especially true with respect to officers overcoming resistance while engaged in the performance of their duties.
This department recognizes and respects the value of human life and dignity without prejudice to anyone. It is also understood that vesting officers with the authority to use reasonable force and protect the public welfare requires a careful balancing of human interests.

It is the policy this Department that officers will use only that amount of force that reasonably appears necessary, given the facts and circumstances perceived by the officer at the time of the event, to effectively bring an incident under control. “Reasonableness” of the force used must be judged from the perspective of a reasonable officer on the scene at the time of the incident. Any interpretation of “reasonableness” must allow for the fact that police officers are often forced to make split-second decisions – in circumstances that are tense, uncertain, and rapidly evolving – about the amount of force that is necessary in a particular situation.

A. Any application of force that is not reasonably anticipated to result in death will be considered non-lethal force. Each officer is provided with equipment, training, and skills to assist in the apprehension and control of suspects as well as protection of officers and the public. Non-lethal force applications may include, but are not limited to, Electronic Devices, Body and Leg Restraints, and other Less Lethal Control Devices.

B. Given that no policy can realistically predict every possible situation an officer might encounter in the field, it is recognized that each officer must be entrusted with well-reasoned discretion in determining the appropriate use of force in each incident. While it is the ultimate objective of every law enforcement encounter to minimize injury to everyone involved, nothing in this policy requires an officer to actually sustain physical injury before applying reasonable force.

C. The University Of California, Davis Police Department authorizes the use of less lethal force applications by officers and supervisors.