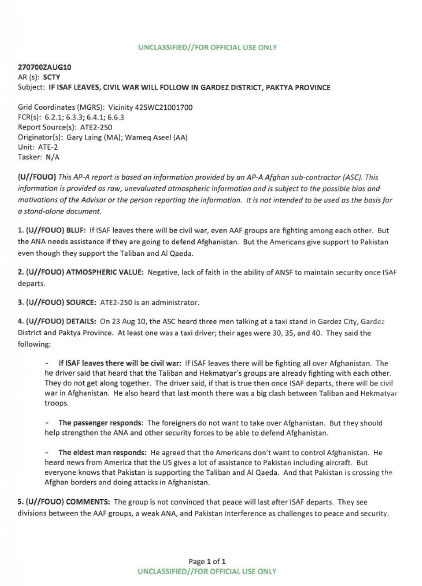 (U/FOUO) This AP-A report is based an information provided by an AP-A Afghan sub-contractor (ASC). This information is provided as raw, unevaluated atmospheric information and is subject to the possible bias and motivations of the Advisor or the person reporting the information. It is not intended to be used as the basis for a stand-alone document.

1. (U/ /FOUO) BLUF: If ISAF leaves there will be civil war, even AAF groups are fighting among each other. But the ANA needs assistance if they are going to defend Afghanistan. But the Americans give support to Pakistan even though they support the Taliban and AI Qaeda.

2. (U/ /FOUO) ATMOSPHERIC VALUE: Negative, lack of faith in the ability of AN SF to maintain security once ISM departs.

The passenger responds: The foreigners do not want to take over Afghanistan. But they should help strengthen the ANA and other security forces to be able to defend Afghanistan. The eldest man responds: He agreed that the Americans don’t want to control Afghanistan. He heard news from America that the US gives a lot of assistance to Pakistan including aircraft. But everyone knows that Pakistan is supporting the Taliban and AI Qaeda. And that Pakistan is crossing the Afghan borders and doing attacks in Afghanistan.

5. (U/ /FOUO) COMMENTS: The group is not convinced that peace will last after ISAF departs. They see divisions between the AAF groups, a weak ANA, and Pakistan interference as challenges to peace and security.