(U//FOUO) Afghanistan Atmospheric Report: No Unified Reason to Fight, No Way to Peace 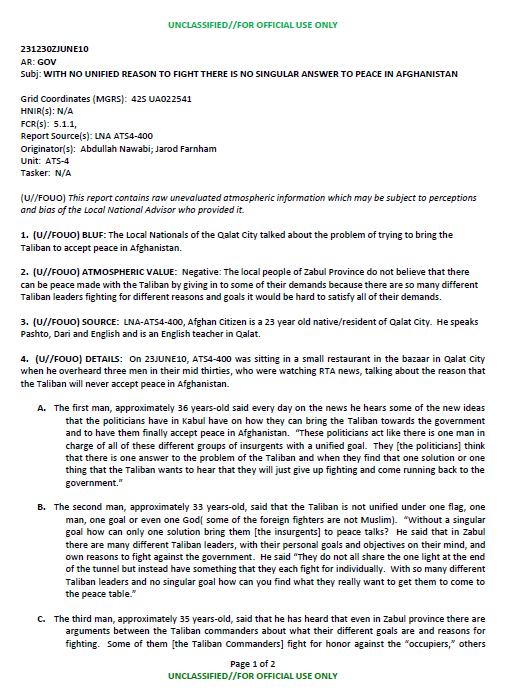 231230ZJUNE10
AR: GOV
Subj: WITH NO UNIFIED REASON TO FIGHT THERE IS NO SINGULAR ANSWER TO PEACE IN AFGHANISTAN

(U//FOUO) This report contains raw unevaluated atmospheric information which may be subject to perceptions and bias of the Local National Advisor who provided it.

1. (U//FOUO) BLUF: The Local Nationals of the Qalat City talked about the problem of trying to bring the Taliban to accept peace in Afghanistan.

2. (U//FOUO) ATMOSPHERIC VALUE: Negative: The local people of Zabul Province do not believe that there can be peace made with the Taliban by giving in to some of their demands because there are so many different Taliban leaders fighting for different reasons and goals it would be hard to satisfy all of their demands.

3. (U//FOUO) SOURCE: LNA-ATS4-400, Afghan Citizen is a 23 year old native/resident of Qalat City. He speaks Pashto, Dari and English and is an English teacher in Qalat.

4. (U//FOUO) DETAILS: On 23JUNE10, ATS4-400 was sitting in a small restaurant in the bazaar in Qalat City when he overheard three men in their mid thirties, who were watching RTA news, talking about the reason that the Taliban will never accept peace in Afghanistan.

A. The first man, approximately 36 years-old said every day on the news he hears some of the new ideas that the politicians have in Kabul have on how they can bring the Taliban towards the government and to have them finally accept peace in Afghanistan. “These politicians act like there is one man in charge of all of these different groups of insurgents with a unified goal. They [the politicians] think that there is one answer to the problem of the Taliban and when they find that one solution or one thing that the Taliban wants to hear that they will just give up fighting and come running back to the government.”

B. The second man, approximately 33 years-old, said that the Taliban is not unified under one flag, one man, one goal or even one God( some of the foreign fighters are not Muslim). “Without a singular goal how can only one solution bring them [the insurgents] to peace talks? He said that in Zabul there are many different Taliban leaders, with their personal goals and objectives on their mind, and own reasons to fight against the government. He said “They do not all share the one light at the end of the tunnel but instead have something that they each fight for individually. With so many different Taliban leaders and no singular goal how can you find what they really want to get them to come to the peace table.”

C. The third man, approximately 35 years-old, said that he has heard that even in Zabul province there are arguments between the Taliban commanders about what their different goals are and reasons for fighting. Some of them [the Taliban Commanders] fight for honor against the “occupiers,” others fight for money or power, political goals; others fight in the name of Allah because their Mullahs preach to them the importance of Jihad. He said that there are different goals between the district Taliban leaders in this province on why they are fighting and what their goals are, so if there are 365 different districts with their own Taliban leaders with their own objectives how can they all come to accept peace for the same reason.

5. (U//FOUO) COMMENTS: The local national adviser said that people in Qalat City do not feel that the Taliban are unified towards a similar goal. He said that even if the Americans left, Karzai was no longer president and some of the Taliban politicians were given government positions the Taliban will not stop fighting and there will not be peace in Afghanistan. The adviser said that with so many different Taliban leaders throughout the country fighting for their own goals and objectives you will never have them all give up because a few of the Taliban leaders demands were met.