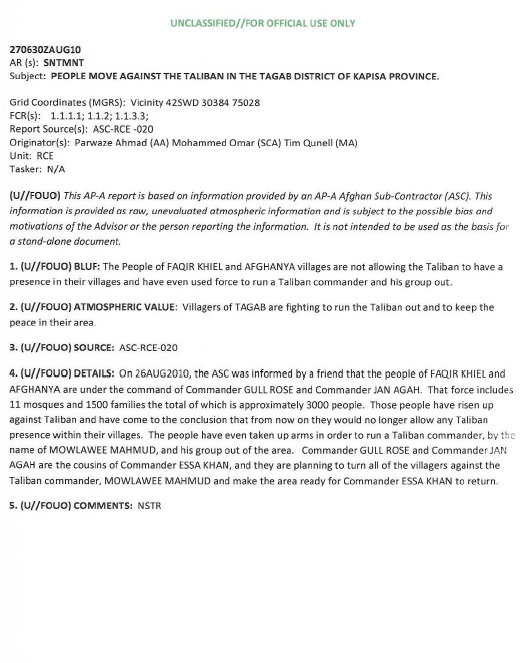 (U//FOUO) This AP-A report is based on information provided by an AP-A Afghan Sub-Contractor (ASC). This information is provided as raw, unevaluated atmospheric information and is subject to the possible bias and motivations of the Advisor or the person reporting the information. It is not intended to be used as the basis for a stand-alone document.

1. (U//FOUO) BLUF: The People of FAQIR KHIEL and AFGHANYA villages are not allowing the Taliban to have a presence in their villages and have even used force to run a Taliban commander and his group out.

2. (U//FOUO) ATMOSPHERIC VALUE: Villagers of TAGAB are fighting to run t he Taliban out and to keep the peace in their area.

4. (U//FOUO) DETAILS: On 26AUG2010, the ASC was informed by a friend that t he people of FAQIR KHIEL and AFGHANYA are under the command of Commander GULL ROSE and Commander JAN AGAH . That force includes 11 mosques and 1500 families the total of which is approximately 3000 people. Those people have risen up against Taliban and have come to the conclusion that from now on they would no longer allow any Taliban presence with in their villages. The people have even taken up arms in order to run a Taliban commander, by the name of MOWLAWEE MAHMUD, and his group out of the area. Commander GULL ROSE and Commander JAN AGAH are the cousins of Commander ESSA KHAN, and they are planning to turn all of the villagers again st the Taliban commander, MOWLAWEE MAHMUD and make the area ready for Commander ESSA KHAN to return.