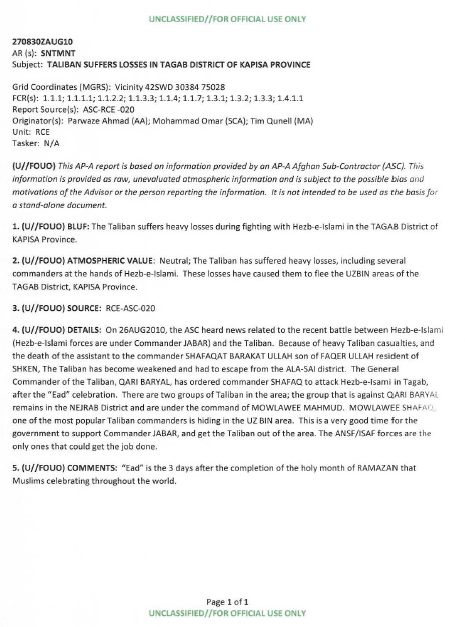 (U//FOUO) This AP-A report is based on information provided by an AP-A Afghan Sub-Contractor (ASC). This information is provided as raw, unevaluated atmospheric information and is subject to the possible bias and motivations at the Advisor or the person reporting the information. It is not intended to be used as the basis for a stand-alone document.

1. (U//FOUO) BLUF: The Taliban suffers heavy losses during fighting with Hezb-e-Islami in the TAGAB District of
KAPISA Province.

2. (U//FOUO) ATMOSPHERIC VALUE: Neutral; The Taliban has suffered heavy losses, including several commanders at the hands of Hezb-e-Islami. These losses have caused them to flee the UZBIN areas of the TAGAB District, KAPISA Province.

4. (U//FOUO) DETAILS: On 26AUG2010, the ASC heard news related to the recent battle between Hezb-e-Islami (Hezb-e-lslami forces are under Commander JABAR) and the Taliban. Because of heavy Taliban casualties, and the death of the assistant to the commander SHAFAQAT BARAKAT ULLAH son of FAQER ULLAH resident of SHKEN, The Taliban has become weakened and had to escape from the ALA-SAl district. The General Commander of the Taliban, OARI BARYAl, has ordered commander SHAFAQ to attack Hezb-e-Isami in Tagab, after the “Ead” celebration. There are two groups of Taliban in the area; the group that is against QARI BARYAL remains in the NEJRAB District and are under the command of MOWLAWEE MAHMUD. MOWLAWEE SHAFAQ. one of the most popular Taliban commanders is hiding in the UZ BIN area. This is a very good time for the government to support Commander JABAR, and get the Taliban out of the area. The ANSF/ISAF forces are the only ones that could get the job done.

5. (U//FOUO) COMMENTS: “Ead” is the 3 days after the completion of the holy month of RAMAZAN that Muslims celebrating throughout the world.