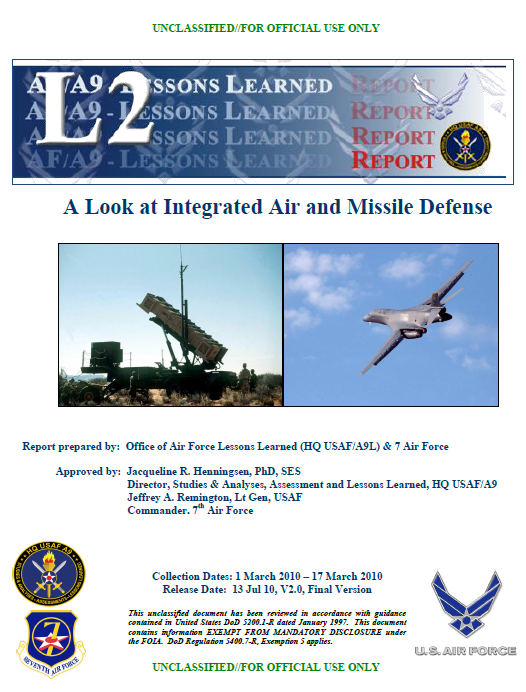 This report focuses on Integrated Air and Missile Defense as practiced by the Combined Air Component Headquarters at Osan AB, Korea. The study was conducted during Exercise Key Resolve 2010 (KR 10) and highlights the outstanding integration of Army, Navy, Marine and Air Force planning and execution of the IAMD mission. The report examines the work done in this particular theater of operations in developing a comprehensive Airspace Control Plan (ACP) and Area Air Defense Plan (AADP). While this report looks at only one operational theater and many other theaters face separate and distinct challenges, this report should provide lessons and insights that benefit multiple theaters.

The integration of air and missile defense is a task required as part of conducting the counterair (CA) mission. Counterair is defined as “the mission that integrates offensive and defensive operations to attain and maintain a desired degree of air superiority. Counterair missions are designed to destroy or negate enemy aircraft and missiles, both before and after launch.” Under counterair are the missions of offensive counterair (OCA) and defensive counterair (DCA), and integrated air and missile defense (IAMD) is a component of both OCA and DCA. A subset of IAMD, ballistic missile defense (BMD) falls squarely in the DCA category. All the services have a role to play in the CA mission and as a result they all have a play in IAMD. Planning and execution of the CA mission is typically lead by members of the Joint Air and Space Operations Center, under the Joint Force Air Component Commander, in his/her role as the Area Air Defense Commander (AADC) and the Airspace Control Authority (ACA), with the Army Air and Missile Defense Command commander serving as the Deputy AADC.

OBSERVATION 1: The nature of the theater ballistic missile (TBM) threat has changed and our counterair strategy has changed to meet the threat.

Discussion: One of the first comments made during this collection was “the nature of the theater ballistic missile threat has changed.” If one thinks of the old SCUD missiles from Desert Storm, with its limited accuracy, fueling requirements, and other associated preparation for launch, you understand the meaning of this comment. Technology has made the modern theater ballistic missile a serious threat and the US has funded the development of systems to defend against the threat. One of the primary missions of USSTRATCOM is to provide space-based theater ballistic missile warning to US forces worldwide. To go beyond simply warning our forces of incoming missiles, we have developed joint architectures, surveillance, detection and tracking capabilities to provide accurate, engagement quality information to the theater commanders around the world. The Korean Peninsula poses a unique problem, with theater missile “time of flight times that are shorter than most decision cycles”. Combine with this, a North Korean Air Force with capabilities that are better than any other force we have faced since the Vietnam War. Granted, they are not a peer competitor, but they are a threat that can get at you with aircraft and missiles. This combined capability drives a dynamic, short decision cycle and unless you know what you are going to do, how you are going to react and are prepared to react on launch detection…you may not have time to react and engage and inbound threat. This is a new game, with high speed missiles that are at least as accurate as the GPS guidance provided by your automobiles navigation system. The nature of the threat has changed.

In the early 1990s, the US began to look seriously at near and long term theater ballistic defense options. What has resulted at the operational level is an example of joint integration by the services, an effort that is improving interdependent capabilities. All the services have unique capabilities, that when integrated, provide the combatant commander with the ability not to just defend against airborne inbound missile threats, but in fact to take the fight to the enemy and destroy the missile systems before they are launched. In Korea, the strategy has adapted to the new theater ballistic missile threat, with leaders drawing on the experiences from multiple years of testing, experimentation, wargames, exercises, and major combat operations in Iraq (OIF I). The systems to detect, track, and engage theater ballistic missiles, prior to or after launch, are in place and incorporated into the counterair strategy.
Lessons Identified: