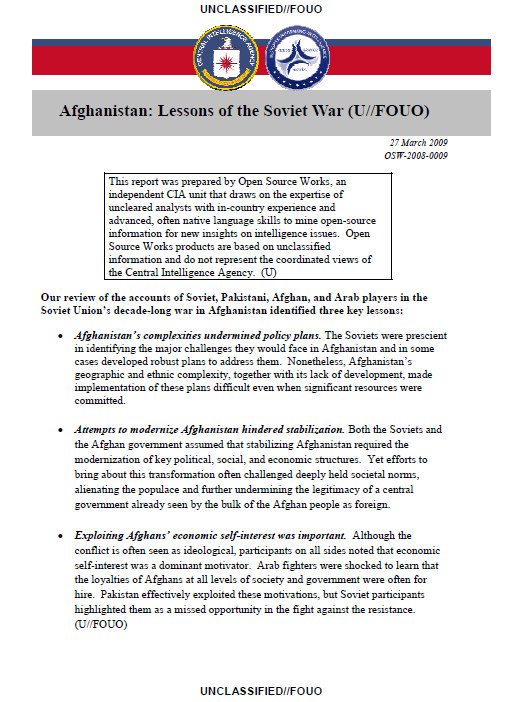 Our review of the accounts of Soviet, Pakistani, Afghan, and Arab players in the Soviet Union’s decade-long war in Afghanistan identified three key lessons:

• Afghanistan’s complexities undermined policy plans. The Soviets were prescient in identifying the major challenges they would face in Afghanistan and in some cases developed robust plans to address them. Nonetheless, Afghanistan’s geographic and ethnic complexity, together with its lack of development, made implementation of these plans difficult even when significant resources were committed.

• Attempts to modernize Afghanistan hindered stabilization. Both the Soviets and
the Afghan government assumed that stabilizing Afghanistan required the
modernization of key political, social, and economic structures. Yet efforts to
bring about this transformation often challenged deeply held societal norms,
alienating the populace and further undermining the legitimacy of a central
government already seen by the bulk of the Afghan people as foreign.

• Exploiting Afghans’ economic self-interest was important. Although the
conflict is often seen as ideological, participants on all sides noted that economic
self-interest was a dominant motivator. Arab fighters were shocked to learn that
the loyalties of Afghans at all levels of society and government were often for
hire. Pakistan effectively exploited these motivations, but Soviet participants
highlighted them as a missed opportunity in the fight against the resistance.
(U//FOUO)

According to Politburo transcripts and insider accounts, Moscow recognized early many
of the fundamental challenges it would face in Afghanistan and launched a variety of
initiatives to address them. Many were similar to the challenges now facing the US –
establishing a legitimate and effective central government; securing the border with
Pakistan; developing a functioning economy; and building productive center-periphery
relations – in a country composed of highly fragmented, traditional micro-societies
lacking a common national identity or functioning infrastructure. (U//FOUO)

By the time Gorbachev became General Secretary in 1985 it was apparent that Moscow’s
exertions in Afghanistan were bearing little fruit. Following an extensive policy review,
the Politburo concluded that the only viable alternative to fighting for twenty to thirty
years was withdrawal. (U//FOUO)

Gorbachev’s goal was relatively modest: to leave Afghanistan a “neutral” country with a
government that could maintain control of Kabul. Yet it took the Soviet government
nearly four years to prepare and complete the withdrawal. When the last Soviet soldier
returned home through the Salang tunnel twenty years ago, it marked the end of a tenyear
campaign that cost the Soviets thousands of lives and billions of dollars, and
profoundly shaped the Afghanistan of today. (U//FOUO)

Lesson One: Even Sound Plans Proved Difficult to Implement in Afghanistan

Contrary to popular belief, the Soviets anticipated as early as 1979 the major problems
they would face but could not deal effectively with them, despite in some cases devoting
substantial financial and human resources.

• Moreover, although the Soviets were burdened by a controversial political system
and coordinated opposition from multiple international parties, they were largely
free from domestic political constraints in devoting significant financial and
human resources to the conflict.

• Declassified documents from Politburo meetings in the months prior to invasion
indicate that Soviet leadership struggled in particular with central government
legitimacy; economic development; religious and ethnic diversity; and border
control. (U//FOUO)

The Soviet leadership was well aware prior to the invasion that the Afghan government
lacked legitimacy and that the Soviet presence would exacerbate this.

• In the spring of 1979, the Politburo concluded there was no support for the
Afghan government: the most popular leaders had been killed or purged, and no one trusted the leadership as a result of its “financial corruption,” “violence towards arrested persons,” “extreme measures and unjustified repression.” In
fact, Soviet Premier Alexei Kosygin observed: “Almost nobody does support the
government.” The Politburo noted that the government was opposed by a diverse
set of forces, united only in “their common negative relation” to the regime.

• The Politburo concluded that the Soviet presence would “[bring] the attack of
anti-governmental forces to a much higher level.” Soviet Foreign Minister
Andrei Gromyko argued: “Our Army, if it enters Afghanistan, will be an
aggressor. Against whom will it fight? Against the Afghan people first of all, and
it will have to shoot at them.” Central Committee Secretary Andrei Kirilenko
reiterated: “…we will be required to wage war in significant part against the
people.” Kosygin agreed, adding: “[A] people does not forgive such things.”
(U//FOUO)

Moscow made inadequate attempts to address the legitimacy question:

• Changing personnel. The Soviets thought Babrak Karmal might be free from
some of the major legitimacy issues of former Afghan Presidents Nur Mohammad
Taraki and Hafizullah Amin, harshly criticized by the Soviets for their
mistreatment of ordinary Afghans. However, Karmal never escaped his label as a
Soviet puppet.

• Exploiting core values: Despite the Communists disdain for religion, the Soviets
encouraged Karmal and his successor, Mohammad Najibullah to leverage Islam
to bolster their credibility with the people. Karmal’s government began all
announcements with invocations from the Koran, established mosques, created a
Ministry for Religious Affairs, and regularly appealed to all “Muslims of
Afghanistan.” Similarly, “Najib re-added ‘Allah’ to his name, renamed the
People’s Democratic Party of Afghanistan (PDPA) the “Watan” (Homeland)
Party, proclaimed his respect for Islam and modified the constitution to say that
Afghanistan is a Muslim state.” These efforts did not alter Afghans’ perception
that the regime was ‘godless’ and Najibullah a KhAD (the State Security Agency)
repressor.

• Convening Loya Jirgas. Beginning with a 1985 attempt to draft a new
constitution, the Soviets convened multiple Loya Jirgas – “grand councils” of tribal elders brought together to resolve particular issues – in an attempt to bolster legitimacy of the central government and broaden its base of support. These
efforts were not viewed as sincere and did not properly represent many key
constituencies.

• Enlisting the opposition. Gorbachev urged the Afghan government in 1985 to
make overtures to some opposition forces to create a more stable regime, yet the
Afghan government balked and the mujahedeen refused because they saw it as a
sign of Soviet weakness and pending departure (See Box on National
Reconciliation). (U//FOUO)

The Soviet Embassy on Dealing with the Pashtuns (U//FOUO)

In a 5 March 1980 memorandum to the International Department of the CC CPSU, the
Soviet Embassy in Afghanistan argues that reversing the confrontation with the
Pashtun tribes is key to stabilizing the DRA and that the traditional social order of the
Pashtun tribes must inform government policy towards them. (U//FOUO)

The memo recommends immediate implementation of the following policies:

• Cease military actions in the tribal zone and withdraw all troops with the
exception of contingents in Hardez, Host and Jalalabad; immediately and
strictly prohibit shootings and bombings of Pashtun villages. The tribal zone
should be protected by a border militia of Pashtun volunteers. Promptly
inform the tribal zone population about this measure.

• DRA and party leadership should immediately address the Pashtun tribes of
Afghanistan to:

o declare deep respect of tribal traditions and promise to abide by them in
recognition of the tribes’ special status;
o declare a ban on military operations in the Pashtun tribal area;
o condemn former shootings and bombings of Pashtun villages;
o promise to distribute monetary compensation to victims;
o call on Pashtun refugees to return and promise they will not be
persecuted for any activities conducted abroad;
o promise to develop, in collaboration with Pashtun elders and mullahs,
and urgently implement a “policy of trust, peace and cooperation” to
establish peace in the tribal zone and protect individual life, property
and increase prosperity.

o expedite social, economic and cultural development of the tribal zone;
o provide for budgeting of funds for tribal needs in Afghanistan’s state
budget;
o reserve spaces for Pashtun boys and young men in high schools and
universities of Jelalabad, Kabul and Kandahar and provide housing and
other necessities for them, to create bureaus for recruiting Pashtun men for unskilled labor jobs, such
as road construction and repair

• Delegate locally-respected and well-informed officials to each region in the
tribal zone to coordinate local administration and observe the general situation.

• Pay out a monthly subsidy to the most authoritative mullahs. (U//FOUO)