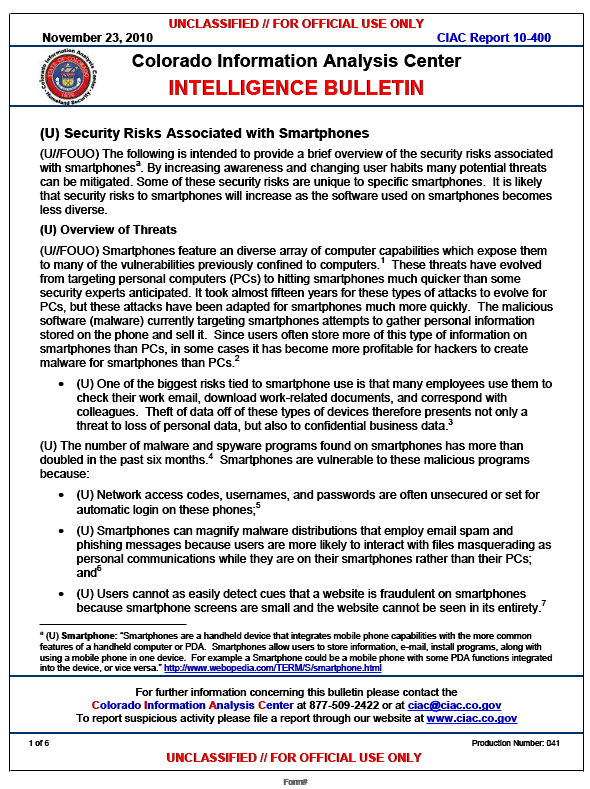 (U) Security Risks Associated with Smartphones

(U) Overview of Threats

(U//FOUO) Smartphones feature an diverse array of computer capabilities which expose them to many of the vulnerabilities previously confined to computers. These threats have evolved from targeting personal computers (PCs) to hitting smartphones much quicker than some security experts anticipated. It took almost fifteen years for these types of attacks to evolve for PCs, but these attacks have been adapted for smartphones much more quickly. The malicious software (malware) currently targeting smartphones attempts to gather personal information stored on the phone and sell it. Since users often store more of this type of information on smartphones than PCs, in some cases it has become more profitable for hackers to create malware for smartphones than PCs.

(U) The number of malware and spyware programs found on smartphones has more than doubled in the past six months. Smartphones are vulnerable to these malicious programs because:

(U) Geolocation data on some smartphones can compromise undercover law enforcement and military personnel if those phones are hacked. Many of the applications that users download to their smartphones can transmit data that can help cyber criminals determine where that person is located. Additionally, undercover law enforcement and military personnel who send photos they have taken on their smartphones via SMS text messages may not realize that embedded global positioning system (GPS) data may also be transmitted, allowing recipients and possibly hackers to determine the longitude and latitude of where the picture was taken.

(U) It is possible for hackers to access and compromise BluetoothUSBUS headsets while they are in use or if the Bluetooth feature is enabled on a smartphone. Two different types of Bluetooth attacks include:

(U) Threats to Specific Smartphones and Their Software

(U//FOUO) The most common forms of smartphones are iPhones, Blackberries, and Droids.

(U//FOUO) However, the threat to cellular networks from malicious software spread through smartphones is likely to remain limited over the short term because, unlike desktop computers, of which 90% use the same operating systems software, smartphones use a diverse array of operating systems software and hardware. Consequently, a vulnerability affecting one type of device is unlikely to affect a majority of smartphones on a particular network. Additionally, since smartphones presently constitute only a small share of the devices using a given cellular network, any single piece of malicious software can target only a fraction of the users on the network. The vulnerability of cellular networks may grow as smartphone use increases or if smartphone technology becomes more standardized across devices and among carriers. The emergence of a common system architecture and software systems will greatly increase the opportunities for hackers to target smartphones in the future.