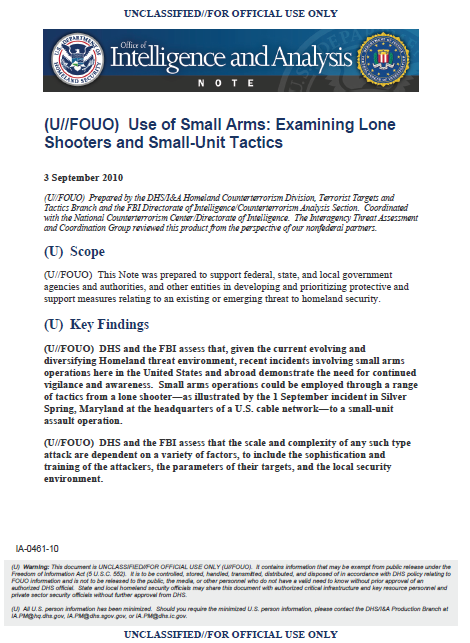 (U//FOUO) DHS and the FBI assess that, given the current evolving and diversifying Homeland threat environment, recent incidents involving small arms operations here in the United States and abroad demonstrate the need for continued vigilance and awareness. Small arms operations could be employed through a range of tactics from a lone shooter—as illustrated by the 1 September incident in Silver Spring, Maryland at the headquarters of a U.S. cable network—to a small-unit assault operation.

(U//FOUO) DHS and the FBI assess that the scale and complexity of any such type attack are dependent on a variety of factors, to include the sophistication and training of the attackers, the parameters of their targets, and the local security environment.

(U//FOUO) Recent lone shooter attacks in the United States illustrate the effectiveness of the small arms tactic and the need for maintaining vigilance and awareness of the possibility that individuals may use this attack method in furtherance of a political or social agenda. The high degree of operational security lone attackers generally observe complicates the ability of law enforcement and homeland security authorities to detect their plans in advance of the attacks.
— (U) On 1 September 2010, a U.S. person armed with a replica weapon and starter pistol—subsequently determined to only fire blanks—took hostages at the SilverSpring, Maryland headquarters building of a U.S. cable network and threatened to open fire. The standoff ended when the U.S. person was killed by law enforcement.
— (U//FOUO) On 5 November 2009, a U.S. Army Officer allegedly opened fire at the Fort Hood military installation’s Readiness Center in Killeen, Texas, killing 12 and wounding at least 31. He was armed with two pistols, according to Army officials.
— (U) On 10 June 2009, an 88 year-old male with white supremacist sympathies opened fire with a rifle at the U.S. Holocaust Museum in Washington, D.C., killing a security guard. The attacker, who was wounded by return fire and arrested on the scene, died on 6 January 2010 prior to the conclusion of his trial.

(U//FOUO) Incidents involving lone gunmen in the United States demonstrate the potential danger, lethality, and effectiveness of an unrehearsed small arms attack by a single individual with little or no training, and underscore the potentially higher consequences of an assault attack involving multiple operatives.

(U//FOUO) Terrorist and violent insurgent groups overseas—operating in nations battling violent civil unrest—have long favored small-unit assault tactics, in which small teams of operatives storm a target using small arms to defeat security. The frequency of these attacks almost certainly stems from perceptions of their effectiveness, the prevalence of small arms instruction at terrorist and militant training camps, and the widespread availability of assault weapons in conflict regions. In July and August 2010, three of these attacks occurred in locations as disparate as Somalia, Russia’s North Caucasus, and Afghanistan.

— (U//FOUO) On 21 July 2010, six attackers—probably insurgents from the North Caucasus—used small arms to kill two security guards and gain entry to a Russian hydroelectric plant. Once inside the facility, they detonated improvised explosive devices (IEDs), destroying two of the plant’s three hydropower generators.

— (U) In an early July 2010 attack on an international development organization’s compound in Kabul, Afghanistan, insurgents breached the front gate with a vehicle-borne improvised explosive device (VBIED). Five operatives armed with assault rifles and small IEDs entered and attacked the facility, killing five and injuring more than 20 people.

(U//FOUO) Given recent events and success of small arms tactics and the evolving, diversified threat faced by the United States from al-Qa‘ida and those inspired by its ideology to commit acts of violence, DHS and FBI assess that transnational terrorist groups and homegrown violent extremists†—whether trained overseas or in the United States—could employ small-unit assault tactics in the U.S.

(U//FOUO) Although DHS and FBI have no information indicating transnational terrorists have attempted to execute a small-unit assault operation in the Homeland, we note that homegrown violent extremists, such as the six individuals found guilty in 2008 of plotting and training to use small arms to launch an assault on Fort Dix, New Jersey, have considered small arms-based assault tactics.

(U//FOUO) DHS and the FBI assess that the scale and complexity of any such type attack are dependent on a variety of factors, to include the sophistication and training of  the attackers, the parameters of their targets, and the local security environment.

(U//FOUO) We face an increased challenge in detecting terrorist plots underway by individuals or small groups acting quickly and independently or with only tenuous ties to foreign handlers. State, local, tribal and private sector partners play a critical role in identifying suspicious activities and raising the awareness of federal counterterrorism officials.

— (U//FOUO) The men plotting to assault Fort Dix in 2006 were discovered only after an attentive store clerk alerted authorities to a videotape of training activities the group attempted to have copied. It is unlikely this type of information would come to the attention of federal officials unless reported by private sector and state, local, and tribal partners through suspicious activity reporting channels.

(U) Engagement with Security Forces

— (U//FOUO) Encourage local law enforcement to meet with key facility staff to assist in the development and familiarization of emergency evacuation and lock down procedures.
— (U//FOUO) Conduct security sweeps for explosive devices and increase security measures in zones that could be compromised.
— (U//FOUO) Local, state, and federal law enforcement entities should routinely conduct joint training and communication coordination exercises to allow for effective deployment of multiple units in a crisis.