UPDATE: There is now a more recent DHS-FBI Joint Intelligence Bulletin available that delineates “specific” and “credible” threats related to the 9/11 anniversary:

This DHS-FBI Joint Assessment was openly posted on the website of the Connecticut branch of Infragard. 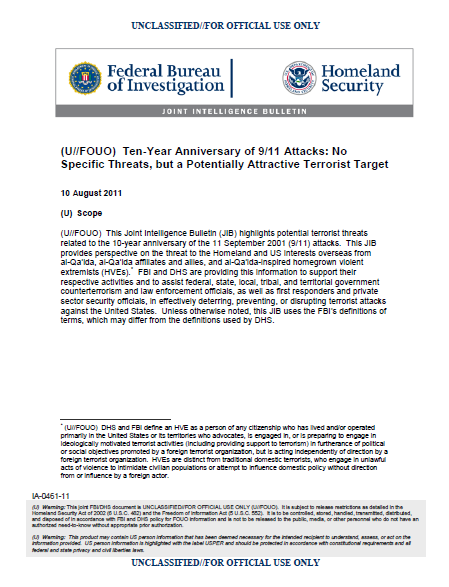 Ten-Year Anniversary of 9/11 Attacks: No Specific Threats, but a Potentially Attractive Terrorist Target

(U//FOUO) This Joint Intelligence Bulletin (JIB) highlights potential terrorist threats related to the 10-year anniversary of the 11 September 2001 (9/11) attacks. This JIB
provides perspective on the threat to the Homeland and US interests overseas from al-Qa‘ida, al-Qa‘ida affiliates and allies, and al-Qa‘ida-inspired homegrown violent
extremists (HVEs). FBI and DHS are providing this information to support their respective activities and to assist federal, state, local, tribal, and territorial government counterterrorism and law enforcement officials, as well as first responders and private sector security officials, in effectively deterring, preventing, or disrupting terrorist attacks against the United States. Unless otherwise noted, this JIB uses the FBI’s definitions of terms, which may differ from the definitions used by DHS.

(U//FOUO) We have no indication that al-Qa‘ida, its affiliates, or its allies are plotting
Homeland attacks to coincide with the 10-year anniversary of 9/11.

(U//FOUO) As of February 2010 al-Qa‘ida was contemplating large attacks in the
Homeland on symbolic dates, to include the 10-year anniversary of the 9/11 terrorist
attacks, but we have no specific, credible information to indicate al-Qa‘ida’s aspirations
have evolved into an active Homeland plot.

(U//FOUO) Although we have not detected plots by HVEs targeting the 9/11
anniversary, we remain concerned that HVEs—motivated by al-Qa‘ida propaganda that
increasingly encourages them to act independently—could try to stage an attack with
little or no warning.

(U//FOUO) As of February 2010, al-Qa‘ida was reportedly contemplating large attacks
in the Homeland timed to symbolic dates, to include the 10-year anniversary of the 9/11
terrorist attacks. We are uncertain, however, how widely this interest in timing an attack
to coincide with the anniversary and other symbolic dates has been accepted within
al-Qa‘ida and have no specific, credible information to indicate an active plot to target
the Homeland was developed based on al-Qa‘ida’s February 2010 intent.
(U//FOUO) We also remain concerned that the May 2011 death of Usama bin Ladin
(UBL) could further contribute to al-Qa‘ida’s desire to stage an attack on a symbolic
date, like the 10-year anniversary of 9/11, as a way to avenge UBL’s death and reassert
the group’s relevance. Despite al-Qa‘ida’s reported preference to conduct attacks that
coincide with symbolic dates and the potential for the group to be motivated by UBL’s
death, we continue to assess that operational readiness remains the primary driving
factor behind the timing of al-Qa‘ida attacks.

(U//FOUO) No Specific 9/11 Anniversary Threat from Al-Qa‘ida Affiliates and
Allies, but Intent to Attack the United States Remains

(U//FOUO) We have not identified any specific threats from al-Qa‘ida affiliates and allies
to attack the United States or US interests overseas on the 9/11 anniversary. We
assess, however, that affiliates and allies such as al-Qa‘ida in the Arabian Peninsula
(AQAP) or Tehrik-e Taliban Pakistan (TTP)—both having demonstrated the intent and
capability to stage attacks against the United States—remain intent on attacking the
Homeland and are almost certainly plotting attacks against US interests, although not
necessarily tied to the 9/11 anniversary.

— (U//FOUO) AQAP—al-Qa‘ida’s most active affiliate—has attempted two attacks
against the United States in the past two years: the 25 December 2009
attempted attack on a Detroit-bound commercial airliner, and the October 2010
plot to send explosive-laden packages aboard aircraft destined for the United
States. We remain concerned that the group continues to pursue innovative
attack methods designed to overcome Western security measures.

(U//FOUO) There is no intelligence that HVEs are actively plotting or planning to attack
the United States on or around 9/11. We remain concerned that HVEs could conduct an
attack with little warning because of the individualized nature of the radicalization
process, which makes it difficult to determine those HVEs with the greatest propensity to
take violent action. Moreover, HVEs who act independently—lone offenders—present
law enforcement with limited opportunities to detect plots.*

— (U//FOUO) We assess HVEs may seek to retaliate for UBL’s death by launching
a 9/11 anniversary attack because of widespread press coverage that UBL
himself supported such an attack. HVEs might regard such attacks as glorifying
the cause and demonstrating their allegiance to al-Qa‘ida.

(U//FOUO) We are concerned that recent public messages from al-Qa‘ida and its
affiliates that encourage independent attacks may increase the threat from HVEs. Both
video and print propaganda from al-Qa‘ida and AQAP have encouraged violent
extremists in the West who lack formal ties to al-Qa‘ida to follow the example of alleged
Fort Hood shooter Major Nidal HasanUSPER and carry out small-scale attacks wherever
they are, with whatever means they have available.

— (U//FOUO) Al-Qa‘ida has released two videos in the past 16 months with
statements by al-Qa‘ida spokesman Adam GadahnUSPER that encourage
individuals in the West to obtain convenient weapons and attack familiar targets.

— (U//FOUO) Several editions of AQAP’s English-language magazine, Inspire,
provide both encouragement and advice for carrying out independent attacks in
the West, including practical instructions for constructing homemade explosive
devices and a two-part series on how to use and maintain an AK-47 assault rifle.