This bulletin was originally published by CBS News. Another version of the document from September 2010 was already published on this site. 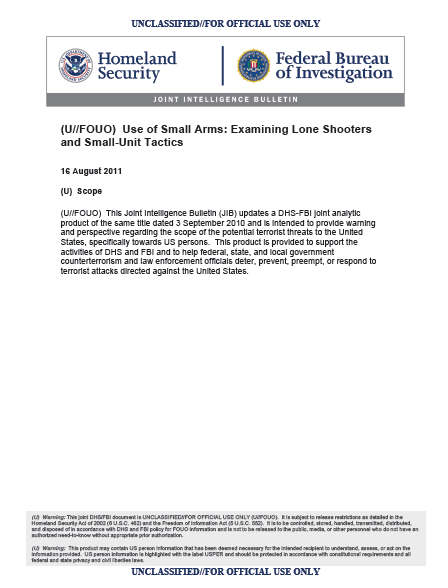 Use of Small Arms: Examining Lone Shooters and Small-Unit Tactics

(U//FOUO) This Joint Intelligence Bulletin (JIB) updates a DHS-FBI joint analytic product of the same title dated 3 September 2010 and is intended to provide warning and perspective regarding the scope of the potential terrorist threats to the United States, specifically towards US persons. This product is provided to support the activities of DHS and FBI and to help federal, state, and local government counterterrorism and law enforcement officials deter, prevent, preempt, or respond to terrorist attacks directed against the United States.

(U//FOUO) The current evolving and diversified homeland threat environment and recent incidents involving small-arms operations in the United States and abroad demonstrate the need for continued vigilance and awareness. Small-arms operations could be employed through a range of tactics from a lone offender—as illustrated by the recent 22 July 2011 lone shooter attack that took place in Norway—to a coordinated small-unit attack involving several operatives.

(U//FOUO) We continue to assess that the scale and complexity of any attack of this type is dependent on a variety of factors, to include the sophistication and training of the attackers, the parameters of their targets, and the local security environment.

(U//FOUO) Recent lone offender attacks and plots in the United States and abroad illustrate the effectiveness of the small-arms tactic and the need for continued vigilance and awareness of this tactic. Attacks by lone offenders—which by definition lack co-conspirators, and therefore provide fewer opportunities for detection—may be more difficult for law enforcement and homeland security authorities to disrupt.

— (U) On 27 July 2011, a US Army soldier who was absent without leave was arrested in Killeen, Texas for his alleged plot to target military personnel stationed at the nearby Fort Hood military post. Gunpowder, ammunition, and other items commonly used in the production of improvised explosive devices (IEDs) were found in the soldier’s hotel room.

— (U) On 22 July 2011, after detonating a vehicle-borne improvised explosive device (VBIED) in Oslo, Norway, Anders Behring Breivik allegedly utilized small arms to kill 69 people on the island of Utoya, 17 miles outside of Oslo. Breivik is believed to have acted alone and used legal methods to procure the vast majority of materials and weapons needed for his operation, successfully avoiding law enforcement suspicion.

— (U) On 2 March 2011, a lone gunman at Frankfurt Airport in Germany killed two US airmen and seriously wounded two others when he boarded a US Air Force bus bound for Ramstein Air Base and opened fire.

— (U) On 5 November 2009, a US Army officer allegedly opened fire at the Fort Hood military installation’s Readiness Center in Killeen, Texas, killing 12 and wounding at least 31. He was armed with two pistols, according to Army officials.

(U//FOUO) Incidents involving lone gunmen in the United States and abroad demonstrate the potential danger, lethality, and effectiveness of an unrehearsed small-arms attack by a single individual with little or no training, and underscore the potentially higher consequences of an assault-style attack involving multiple operatives.

(U//FOUO) Given recent events demonstrating the success of small-arms tactics and the evolving, diversified threat faced by the United States from al-Qa‘ida and those inspired by its ideology, we assess that transnational terrorist groups and homegrown violent extremists (HVEs) could employ small-unit assault tactics in the United States.

(U) Although we have no information indicating transnational terrorists have attempted to execute a small-unit assault operation in the Homeland, we note that disrupted HVE plots, such as the six individuals found guilty in 2008 of targeting the military base in Fort Dix, New Jersey and, more recently, two men alleged to have targeted a Military Entrance Processing Station in Seattle, Washington planned to employ small armsbased assault tactics.

(U//FOUO) Failed bombing attacks targeting the Homeland—a 25 December 2009 attempt by an alleged al-Qa‘ida in the Arabian Peninsula operative to detonate an IED on a flight from the Netherlands to Detroit and an unsuccessful VBIED attack in Times Square by a self-confessed Tehrik-e Taliban Pakistan operative—illustrate the complexity of training and deploying a terrorist
operative to the Homeland to carry out attacks using explosives.

(U//FOUO) While terrorist organizations almost certainly will continue to attempt future homeland attacks using IEDs, it is also possible that operational planners will incorporate small-arms attacks that do not require mastery of IED construction or risk the failure of a complex bomb design.