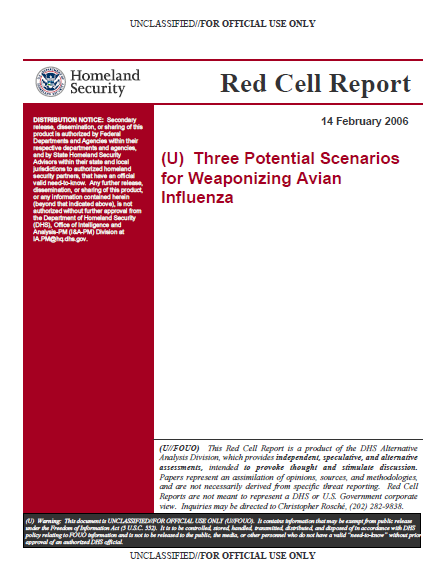 (U//FOUO) This report explores how terrorists or other non-state adversaries could potentially facilitate an avian influenza outbreak within the United States. The report was primarily intended to assist the Secretary of Homeland Security, Chief Intelligence Officer, Deputy Assistant Secretary, and Chief Medical Officer as they consider the implications of avian influenza to the Homeland. The scenarios explored in this paper are speculative and meant only to broaden the scope of thinking. They are not based on specific evidence or intelligence about terrorists’ plans and capabilities, but are considered scientifically feasible, according to experts that were interviewed.

(U) In addition to surveying the available related literature, Alternative Analysis Division analysts used structured alternative analysis techniques to produce this report. Analysts interviewed leading independent experts on health, food, and terrorism, and facilitated a structured, scenariobased brainstorming session with independent agriculture, food, and health experts inside and outside government.

(U//FOUO) In the scenarios described, the Alternative Analysis Division made the following key assumptions:

⎯ (U//FOUO) The adversary’s top concern would be to damage the economy and cause widespread fear. Human casualties would not be a primary goal.

⎯ (U//FOUO) Al-Qa‘ida and other sophisticated terrorist groups do not currently have the capability to easily manipulate and reproduce the genetic makeup of the avian virus (H5N1), although the experts indicated that recent advancements in technology and the proliferation of knowledge could make this type of research easier to conduct in the future.

(U//FOUO) Public health and biological security experts believe the most likely scenario would be for terrorists to collect samples of avian influenza virus from infected poultry in Asia, Turkey, Romania, Iraq, or parts of Africa; allow the samples to multiply in a laboratory; and distribute the virus among the U.S. chicken population. The main purpose of this attack would be to cause economic damage.

⎯ (U//FOUO) This scenario would be the most likely of the three examined because of the relative ease of execution, high probability of successful infection, and potentially large economic impact.

⎯ (U//FOUO) The highly virulent strain of avian flu currently circulating in Asia—nearly 100 percent fatal in domesticated poultry—spreads quickly among chicken populations. It would be simple to smuggle the virus into the Homeland by obtaining a sample, placing it in a vial, and hiding it in a pocket or in luggage. The World Health Organization notes that such a sample could remain viable for between 6 and 35 days, depending on the temperature. An individual could travel by automobile, plane, or train with high confidence that the small vial and its contents would not be detected. Spreading the virus also would be relatively simple—a cloth could be contaminated with both the virus and organic material, such as poultry fecal matter, and placed in a farm’s feeding area.

(U) Almost 80 percent of the U.S. chicken population is concentrated in the Southeast Atlantic region, according to the U.S. Department of Agriculture. An attack in this area could have significant economic consequences. For example, recent efforts to control the virus in Southeast Asia have cost billions of dollars.

⎯ (U) When a mild strain of avian flu infected U.S. chickens in 2004, the outbreak spread to five states within a month. China, Japan, Malaysia, Singapore, Korea, and Russia— the top foreign markets for U.S. poultry—banned imports.

⎯ (U) Responding to a 2002 outbreak in Virginia of a mild strain of avian flu cost $130 million (excluding trade losses), killed 4 million birds, and forced a quarantine of 197 farms. The 1983-84 outbreak of a more virulent strain raised the retail prices of eggs by 30 percent.