(U//FOUO) DHS “Red Cell” Report: How Terrorists Might Use a Dirty Bomb 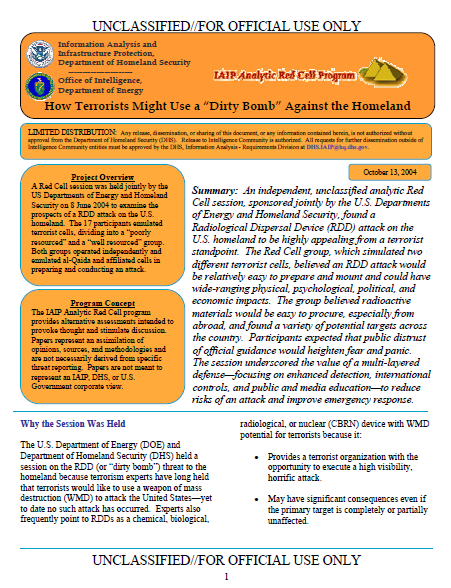 An independent, unclassified analytic Red Cell session, sponsored jointly by the U.S. Departments of Energy and Homeland Security, found a Radiological Dispersal Device (RDD) attack on the U.S. homeland to be highly appealing from a terrorist standpoint. The Red Cell group, which simulated two different terrorist cells, believed an RDD attack would be relatively easy to prepare and mount and could have wide-ranging physical, psychological, political, and economic impacts. The group believed radioactive materials would be easy to procure, especially from abroad, and found a variety of potential targets across the country. Participants expected that public distrust of official guidance would heighten fear and panic.

The session underscored the value of a multi-layered defense—focusing on enhanced detection, international controls, and public and media education—to reduce risks of an attack and improve emergency response.

A terrorist organization plans an attack on the New York Stock Exchange (NYSE) using suicide bombers. Two bombers, equipped with RDDs consisting of several pipe bombs surrounded by cesium chloride with remote detonation devices placed inside of backpacks, drive to Wall Street and exit the car near the NYSE. The bombers begin to make their way towards the entrance to the NYSE, but security personnel detain them outside. The terrorists detonate both devices before the backpacks can be searched. After the bombs contaminate the immediate area of the NYSE, people flee the area and spread the contamination even further.  While the primary target is not significantly damaged, the contamination will severely hamper business activities and cleanup activities in the business district.

* Participants were asked to present their best professional opinions but were not
speaking on behalf of their respective employers nor necessarily representing the
corporate position of their employers. Not all participant agencies agree with all
opinions or conclusions expressed in this paper.