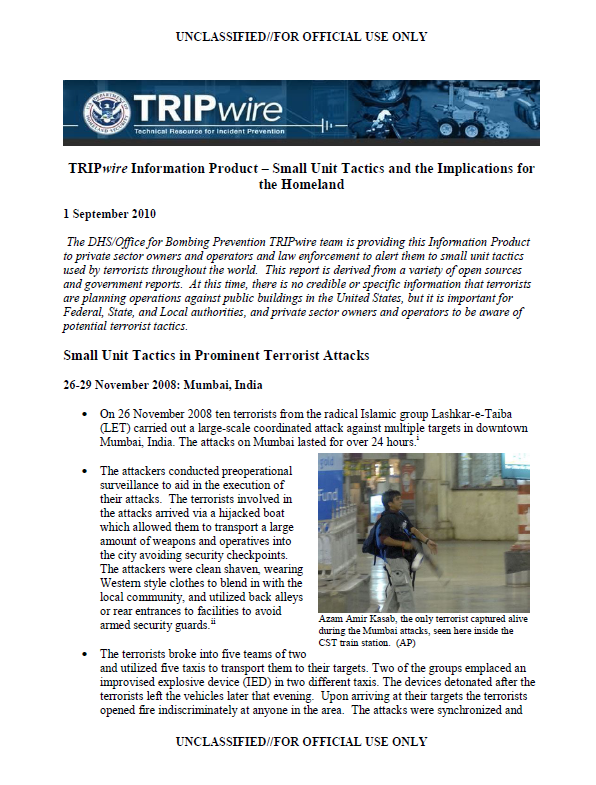 Domestic Use of Small Unit Tactics

To date, the United States has not witnessed a successful terrorist attack utilizing small unit tactics. Migration of TTPs related to the use of explosives have been seen in examples such as the World Trade Center bombing in 1993, the 2009 plot to detonate IEDs within the New York subway system, and the attempted Christmas Day airline bombing in 2009. Therefore, the same TTPs proven successful overseas such as in Mumbai or in Afghanistan could be adopted for use in the United States.

Terrorist Training Material on the Internet

Various small cells and individuals planning terrorist attacks have been known to communicate and view radical Islamic forums over the Internet. Numerous al-Qaeda training manuals and terrorist websites discuss the use of small unit tactics in a variety of languages on the Internet for inspiration and widespread dissemination. Several documents and forum posts were produced before and in the aftermath of the Mumbai attacks calling for small-unit tactics to be used by Islamic extremist terrorists throughout the world.

Some examples of translated Arabic-language material from extremist websites include:

According to a DHS and FBI Note, a compact disc (CD) was seized by European authorities in 2008 that discussed tactics taught in al-Qaeda training camps for attacking publicly accessible buildings and called for similar tactics used in Mumbai and other small-unit terrorist attacks. The CD recommended terrorists to assemble a team of 12 individuals, each armed with an assault rifle and grenades and carrying approximately 40 pounds of explosives. The CD also discusses the tactic of storming a building, sealing off escape and access points, and occupying it long enough to set and detonate explosives before law enforcement can respond.

Private sector security and law enforcement agencies can utilize protective measures to help disrupt, or mitigate a terrorist attack in multiple phases. The various phases of a terrorist attack
include surveillance, target selection, infiltration, accessing the target, and engagement with
security forces.