A following is a text-only version of a bulletin recently issued by the Georgia Information Sharing and Analysis Center (GISAC).  . 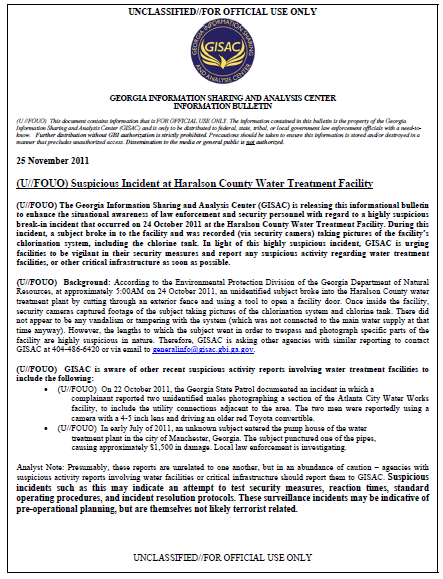 (U//FOUO) The Georgia Information Sharing and Analysis Center (GISAC) is releasing this informational bulletin to enhance the situational awareness of law enforcement and security personnel with regard to a highly suspicious break-in incident that occurred on 24 October 2011 at the Haralson County Water Treatment Facility. During this incident, a subject broke in to the facility and was recorded (via security camera) taking pictures of the facility’s chlorination system, including the chlorine tank. In light of this highly suspicious incident, GISAC is urging facilities to be vigilant in their security measures and report any suspicious activity regarding water treatment facilities, or other critical infrastructure as soon as possible.

(U//FOUO) Background: According to the Environmental Protection Division of the Georgia Department of Natural Resources, at approximately 5:00AM on 24 October 2011, an unidentified subject broke into the Haralson County water treatment plant by cutting through an exterior fence and using a tool to open a facility door. Once inside the facility, security cameras captured footage of the subject taking pictures of the chlorination system and chlorine tank. There did not appear to be any vandalism or tampering with the system (which was not connected to the main water supply at that time anyway). However, the lengths to which the subject went in order to trespass and photograph specific parts of the facility are highly suspicious in nature. Therefore, GISAC is asking other agencies with similar reporting to contact GISAC at 404-486-6420 or via email to generalinfo@gisac.gbi.ga.gov.

(U//FOUO) GISAC is aware of other recent suspicious activity reports involving water treatment facilities to include the following:

Analyst Note: Presumably, these reports are unrelated to one another, but in an abundance of caution – agencies with suspicious activity reports involving water facilities or critical infrastructure should report them to GISAC. Suspicious incidents such as this may indicate an attempt to test security measures, reaction times, standard operating procedures, and incident resolution protocols. These surveillance incidents may be indicative of pre-operational planning, but are themselves not likely terrorist related.

(U) For Official Use Only: This information is the property of GISAC and may be distributed to state, tribal, or local government law enforcement officials with a need-to-know. Further distribution without GBI authorization is prohibited. Precautions should be taken to ensure this information is stored and/or destroyed in a manner that precludes unauthorized access.

(U) This bulletin was prepared by the Georgia Information Sharing and Analysis Center (GISAC). Comments and queries and additional information may be addressed to GISAC at 404-486-6420 or generalinfo@gisac.gbi.ga.gov.

GAWARN continues to monitor this event. This information is for situational awareness. Official GISAC release can be found on the GAWARN website.