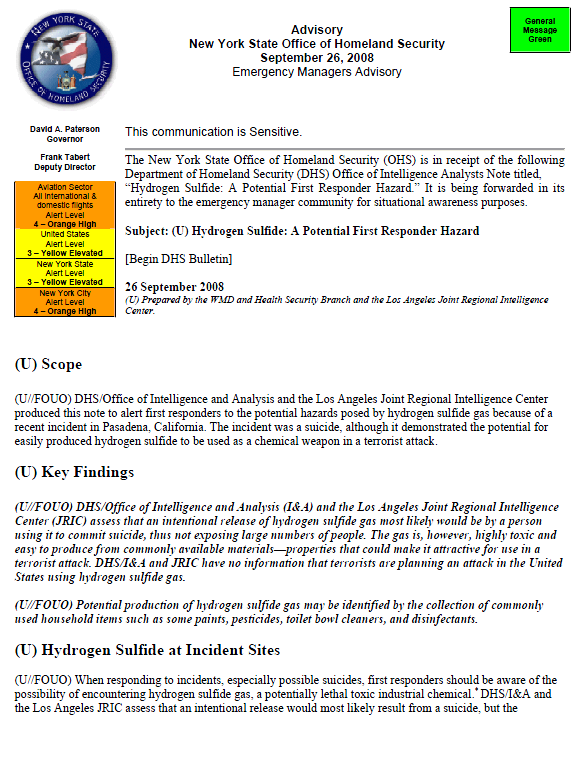 (U//FOUO) DHS/Office of Intelligence and Analysis and the Los Angeles Joint Regional Intelligence Center produced this note to alert first responders to the potential hazards posed by hydrogen sulfide gas because of a recent incident in Pasadena, California. The incident was a suicide, although it demonstrated the potential for easily produced hydrogen sulfide to be used as a chemical weapon in a terrorist attack.

(U//FOUO) DHS/Office of Intelligence and Analysis (I&A) and the Los Angeles Joint Regional Intelligence Center (JRIC) assess that an intentional release of hydrogen sulfide gas most likely would be by a person using it to commit suicide, thus not exposing large numbers of people. The gas is, however, highly toxic and easy to produce from commonly available materials—properties that could make it attractive for use in a terrorist attack. DHS/I&A and JRIC have no information that terrorists are planning an attack in the United States using hydrogen sulfide gas.

(U//FOUO) Potential production of hydrogen sulfide gas may be identified by the collection of commonly used household items such as some paints, pesticides, toilet bowl cleaners, and disinfectants.

(U) Hydrogen Sulfide at Incident Sites

(U//FOUO) When responding to incidents, especially possible suicides, first responders should be aware of the possibility of encountering hydrogen sulfide gas, a potentially lethal toxic industrial chemical.* DHS/I&A and the Los Angeles JRIC assess that an intentional release would most likely result from a suicide, but the planning attacks in the United States using hydrogen sulfide gas, although first responders should exercise caution if they suspect the presence of hydrogen sulfide.

* (U) Hydrogen sulfide is a byproduct of the decay of organic material and accidental exposure has occurred in situations involving sewage, liquid manure, natural gas, and animal or vegetable matter storage or processing. It also is found at some industrial facilities, such as wastewater treatment plants, petroleum refineries, pulp and paper manufacturers, and plants producing sulfur or sulfuric acid.

(U) Properties and Methods of Production

(U//FOUO) Hydrogen sulfide is a colorless, toxic, and flammable gas with a strong odor of rotten eggs at low concentrations. Its odor is not a reliable indicator of its presence, however, because high concentrations or continuous exposure deaden the sense of smell. It can be produced by mixing a sulfur source, such as certain paints and pesticides, with an acid, such as those found in toilet bowl cleaners and disinfectants (see Table 1). The extent of the hazard will depend on the concentration of the reactive sulfur and acid in the tem used.

(U) Potential Use by Terrorists

(U//FOUO) Terrorist training manuals have discussed using hydrogen sulfide gas in an attack. DHS/I&A and the JRIC assess that the chemical reactions described in the manuals are viable and would yield hydrogen sulfide, but no information indicates that a terrorist attack is imminent using this chemical.

(U//FOUO) DHS/I&A and the JRIC assess that it would be difficult for terrorists to create fatal concentrations of hydrogen sulfide in large open areas because the gas would dissipate; however, terrorists could use it in enclosed spaces to cause disruption and panic, based on the circumstances of non-terrorist-related events.

— (U) The discovery of the suicide victim in Pasadena led to the evacuation of several businesses in the immediate area and left bystanders stranded for up to five hours while responders assessed the scene.

— (U) In one incident in Japan, 90 people in an apartment building reportedly were sickened when a teenage girl killed herself in the bathroom of her apartment by mixing household items that produced hydrogen sulfide.