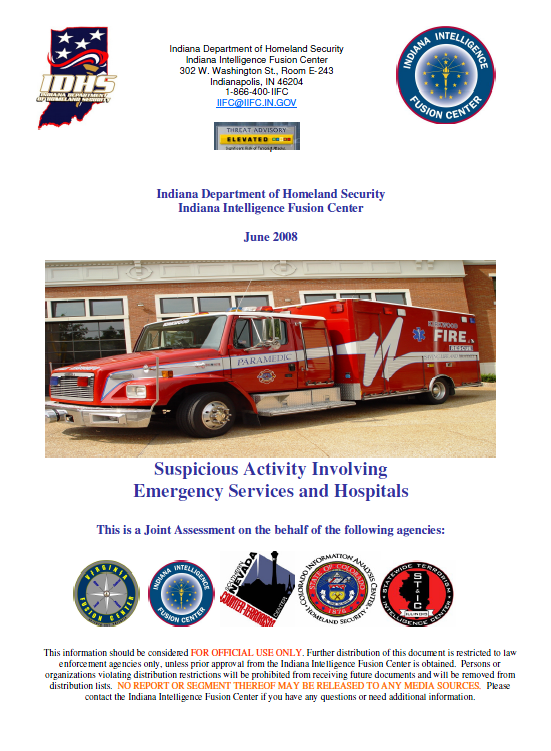 (U//FOUO) The purpose of this assessment is to provide situational awareness of suspicious incidents involving the ESS, as reported by local public safety officials and State and Local Fusion Centers in Indiana, Virginia, Colorado, Nevada, and Illinois.

(U//FOUO) The IIFC assesses there to be no specific foreign or domestic terrorism threat related to the ESS, to include hospitals, within the jurisdictions of contributing State and Local Fusion Centers.

(U//FOUO) Pre-operational surveillance of emergency service facilities, hospitals and fire stations could provide an adversary with emergency procedures and protocols, response time and capabilities, and facilitate access to emergency service uniforms and equipment.

(U//FOUO) Attacks on ESS personnel, physical assets, and communication/cyber systems are serious threats to the continuity of operations.

(U//FOUO) Enrollment into an Emergency Medical Technician (EMT) course provides an understanding of emergency procedures and protocols that a terrorist may use to learn about emergency response vulnerabilities.

(U//FOUO) Based on previous assessments, and observed terrorist attacks abroad, the IIFC concludes there are a number of situations where the ESS could be susceptible to an attack within the Homeland.

(U//FOUO) Past intelligence reports indicate that al Qaeda and other terror networks may try to convince/solicit U.S. hospitals and medical clinics to help them obtain B-2 visas to gain entry into the United States as medical patients.

(U//FOUO) Past assessments indicate the opening stages of terrorist attacks may be
directed at U.S. hospitals.

(U//FOUO) Homegrown terrorists and foreign terrorists living in the United States could try to establish themselves as legitimate persons in the community by holding important jobs such as doctors, paramedics, nurses, or EMTs.

(U//FOUO) Terrorists may use the aforementioned professions to gain access to critical infrastructures, large events, or other sensitive areas in hopes of carrying out a large-scale attack producing mass casualties.

(U//FOUO) Using stolen emergency vehicles (i.e. emergency medical services, fire, and police vehicles), terrorists could impersonate and blend in with first responders for the purpose of conducting a VBIED attack.