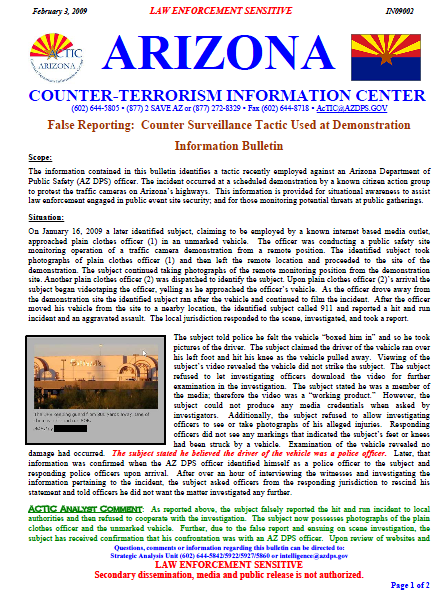 The information contained in this bulletin identifies a tactic recently employed against an Arizona Department of Public Safety (AZ DPS) officer. The incident occurred at a scheduled demonstration by a known citizen action group to protest the traffic cameras on Arizona’s highways. This information is provided for situational awareness to assist law enforcement engaged in public event site security; and for those monitoring potential threats at public gatherings.

ACTIC Analyst Comment: As reported above, the subject falsely reported the hit and run incident to local authorities and then refused to cooperate with the investigation. The subject now possesses photographs of the plain clothes officer and the unmarked vehicle. Further, due to the false report and ensuing on scene investigation, the subject has received confirmation that his confrontation was with an AZ DPS officer. Upon review of websites and blog chats for the demonstration, it was apparent the demonstrators were taking photographs of law enforcement personnel as they approached the demonstration. Several photographs of local police officers appear on the website to document the demonstration. Additionally, demonstrators are aware of the presence of law enforcement monitoring as confirmed in the attached photograph.

This is a potential Officer Safety concern for law enforcement.

The motivation behind the false report is unknown, however, the ACTIC would like to remind all officers and those involved with monitoring public safety events to be vigilant and aware of the tactics demonstrators may use to bait officers or disrupt protest monitoring during public safety operations.

In the recent past, citizen action groups and other single issue protest groups in Arizona have provoked and/or fabricated situations of duress when they are confronted by law enforcement. It is likely they do this to further demonstrate they are the “victim of unconstitutional infringements to their civil liberties.” This tactic allows these entities to leverage the media coverage associated with their confrontations with law enforcement and often allows them to simultaneously promote their cause. They may be attempting to create a situation in which they can make a civil claim to sue for money; or file criminal charges against law enforcement or another  government entity to discourage further actions against the group. Officers are reminded to rely on their training, department policies and experience when conducting operations to ensure public safety while monitoring the protest activities of these groups or responding to incidents at these types of events.