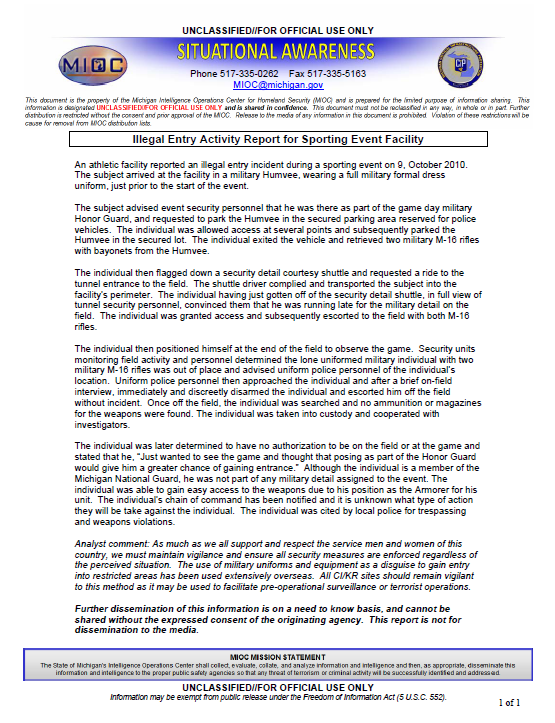 An athletic facility reported an illegal entry incident during a sporting event on 9, October 2010. The subject arrived at the facility in a military Humvee, wearing a full military formal dress uniform, just prior to the start of the event.

The subject advised event security personnel that he was there as part of the game day military Honor Guard, and requested to park the Humvee in the secured parking area reserved for police vehicles. The individual was allowed access at several points and subsequently parked the Humvee in the secured lot. The individual exited the vehicle and retrieved two military M-16 rifles with bayonets from the Humvee.

The individual was later determined to have no authorization to be on the field or at the game and stated that he, “Just wanted to see the game and thought that posing as part of the Honor Guard would give him a greater chance of gaining entrance.” Although the individual is a member of the Michigan National Guard, he was not part of any military detail assigned to the event. The individual was able to gain easy access to the weapons due to his position as the Armorer for his unit. The individual’s chain of command has been notified and it is unknown what type of action they will be take against the individual. The individual was cited by local police for trespassing and weapons violations.

Analyst comment: As much as we all support and respect the service men and women of this country, we must maintain vigilance and ensure all security measures are enforced regardless of the perceived situation. The use of military uniforms and equipment as a disguise to gain entry into restricted areas has been used extensively overseas. All CI/KR sites should remain vigilant to this method as it may be used to facilitate pre-operational surveillance or terrorist operations.