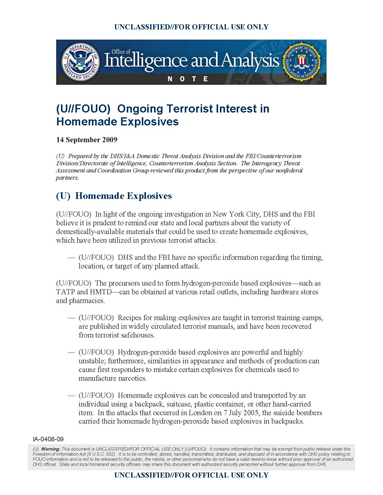 Office of Intelligence and Analysis Note

(U) Prepared by the DHS/I&A Domestic Threat Analysis Division and the FBI/Counterterrorism Division/Directorate of Intelligence, Counterterrorism Analysis Section. The Interagency Threat Assessment and Coordination Group reviewed this product from the perspective of our nonfederal partners.

(U//FOUO) In light of the ongoing investigation in New York City, DHS and the FBI believe it is prudent to remind our state and local partners about the variety of domestically-available materials that could be used to create homemade explosives, which have been utilized in previous terrorist attacks.

— (U//FOUO) DHS and the FBI have no specific information regarding the timing, location, or target of any planned attack.

(U//FOUO) The precursors used to form hydrogen-peroxide based explosives—such as TATP and HMTD—can be obtained at various retail outlets, including hardware stores and pharmacies.

— (U//FOUO) Recipes for making explosives are taught in terrorist training camps, are published in widely circulated terrorist manuals, and have been recovered from terrorist safehouses.

— (U//FOUO) Hydrogen-peroxide based explosives are powerful and highly unstable; furthermore, similarities in appearance and methods of production can cause first responders to mistake certain explosives for chemicals used to manufacture narcotics.

— (U//FOUO) Homemade explosives can be concealed and transported by an individual using a backpack, suitcase, plastic container, or other hand-carried item. In the attacks that occurred in London on 7 July 2005, the suicide bombers carried their homemade hydrogen-peroxide based explosives in backpacks.

(U) Potential Indicators of Explosives Manufacturing

(U//FOUO) In general, almost every home-made explosives manufacturing process affects the immediate environment. Individuals using concentrated hydrogen peroxide also might exhibit white-colored peroxide burns on skin that has come in direct contact with these types of substances. Some indicators that may point to homemade explosives production include the following:

— (U//FOUO) Individuals who have burn marks on their hands, arms, or face, or who have stains on clothing.

— (U//FOUO) Foul odors or caustic fumes coming from a room or building.

— (U//FOUO) Damage to ceilings and walls—such as corrosion of metal surfaces or structural damage—and paint discoloration from harsh chemical fumes.

— (U//FOUO) Presence of metal or plastic drums for storing explosives.

(U//FOUO) Further potential indicators include individuals requesting or purchasing information (such as textbooks) on using peroxide. Additionally, high-quantity purchases of hydrogen peroxide—such as more than a gallon—should also be considered suspicious.

(U) DHS and the FBI encourage recipients of this document to report information concerning suspicious or criminal activity to DHS and the FBI. The DHS National Operations Center (NOC) can be reached by
telephone at 202-282-9685 or by e-mail at NOC.Fusion@dhs.gov. For information affecting the private sector and critical infrastructure, contact the National Infrastructure Coordinating Center (NICC), a
sub-element of the NOC. The NICC can be reached by telephone at 202-282-9201 or by e-mail at NICC@dhs.gov. The FBI regional phone numbers can be found online at http://www.fbi.gov/contact/fo/fo.htm. When available, each report submitted should include the date, time, location, type of activity, number of people and type of equipment used for the activity, the name of the submitting company or organization, and a designated point of contact.

(U) For comments or questions related to the content or dissemination of this document, please contact the DHS/I&A Production Branch staff at IA.PM@hq.dhs.gov, IA.PM@dhs.sgov.gov, or IA.PM@dhs.ic.gov.