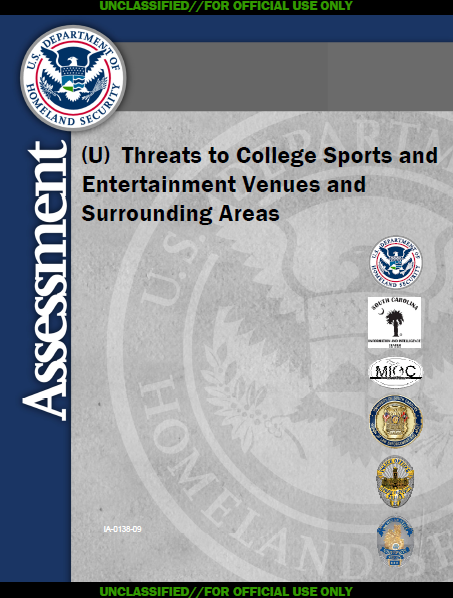 (U//FOUO) The Department of Homeland Security/Office of Intelligence and Analysis, the South Carolina Information and Intelligence Center, and the Michigan Intelligence Operations Center, in coordination with the University of South Carolina, Clemson University, and Michigan State University, have prepared the following threat assessment to assist security planners and law enforcement personnel in monitoring threat information and maintaining a safe and secure event environment for U.S. college sports and entertainment venues and surrounding areas. These areas include entrance and egress routes to the venue, local hotels, restaurants and bars, and parking lots where crowds gather.

(U//FOUO) DHS/Office of Intelligence and Analysis (I&A), the South Carolina
Information and Intelligence Center (SCIIC), and Michigan Intelligence Operations
Center (MIOC) have not identified a credible terrorist threat to U.S. college sports and
entertainment venues or surrounding areas. The high-profile nature of large
collegiate events, however, could make them a possible target for domestic or
international terrorists.

(U//FOUO) Domestic terrorist groups do not present a significant threat to
U.S. college sports and entertainment venues and surrounding areas. Domestic
terrorists have attacked soft targets in the past, however, and some probably continue
to view major sporting events in large stadiums and associated events in surrounding
areas as possible targets.

(U//FOUO) Hundreds of U.S. college sports and entertainment venues, including indoor
arenas and outdoor stadiums, attract large numbers of spectators. Infrastructure around
the venues and campus complexes, including hotels, local businesses, and parking areas,
often attract large crowds before and after an event. Some events are particularly high
profile, attracting national media attention and crowds in excess of 100,000.

(U//FOUO) DHS/I&A, the SCIIC, and the MIOC lack credible or specific information
indicating current plots aimed at college sports and entertainment venues but assess that
terrorist organizations such as al-Qa‘ida, its affiliates, and ideologically similar groups
view occupied sports stadiums and arenas as potential targets. Al-Qa‘ida’s repeatedly
stated objectives include causing economic damage, mass casualties, and psychological
impact, all of which could be achieved by attacking a large college sporting event.

— (U//FOUO) A posting on a jihadist message board in February 2006, “How You
Can Kill Thousands of Americans with a Few Hundred Dollars and Three Men,”
advocated targeting U.S. sporting venues and other public facilities during events.
The posting did not describe or imply an imminent attack.

(U//FOUO) Because of the heavy security presence at many college venues, plotters may
also consider attacking surrounding targets such as public transportation, large
gatherings, or businesses. Terrorists may be able in some cases to achieve similar impact
without having to defeat stadium security.

(U//FOUO) DHS/I&A, the SCIIC, and the MIOC are not aware of any specific or
credible threat posed by domestic terrorist groups or individuals to college sports and
entertainment venues. It is less likely that domestic terrorists would be interested in
attacking college events in general as they tend to limit their interest to a fairly narrow
spectrum of sites and institutions, usually those antithetical to their cause. A domestic
extremist may, however, choose to attack a college’s sports or entertainment venue in
response to a grievance specific to the targeted institution.

(U//FOUO) College sporting events are potentially threatened by lone wolves, so called
because they operate individually, with little or no outside assistance or guidance, and
can be motivated by wide-ranging factors. Because of their nature and lack of obvious
ties to known groups of concern, lone wolves present a particular challenge for law
enforcement.

— (U) A heavily armed individual, upset at a local decision to deny his business a
liquor license, drove to the site of the 2008 Super Bowl on game day. The subject
intended to go on a pre-game shooting rampage, but changed his mind at the last
moment and turned himself in to police.

— (U//FOUO) In October 2005, a University of Oklahoma student blew himself up
in a park outside the Gaylord Family-Oklahoma Memorial Stadium while a game
was in progress. Authorities found no ties to terrorism, but the incident’s
proximity to the stadium was cause for alarm.

(U//FOUO) Attack planners could attempt to gain entry to a secure college sports venue
by leveraging the access of an employee or by impersonating an authorized individual.
Counterfeit law enforcement badges and credentials purchased online—often of high quality and hard to differentiate from legitimate credentials—can facilitate unauthorized
entry. Use of illicit credentials to gain access to the grounds of the sporting events may
be difficult to detect.

— (U//FOUO) In 2005, an individual impersonating an FBI Special Agent was able
to enter secure areas of the track venue during a professional stock car race.
Security personnel or staff did not question his presence, and he was able to move
freely within restricted areas.

(U//FOUO) IEDs and VBIEDs are the attack methods terrorists are most likely to use
against college sports events and surrounding facilities. DHS/I&A, the SCIIC, and
MIOC, however, have no specific or credible intelligence that terrorists plan to attack
college sporting events in this manner. Attacks on occupied arenas or stadiums using
IEDs or VBIEDs would likely inflict mass casualties and cause significant physical
damage. An attack against a crowded college sports stadium also would generate
extensive media attention for the attacker.

(U//FOUO) IEDs and VBIEDs also are plausible methods for attacking less secure
targets in the vicinity of college sports venues.

(U//FOUO) Attacking a college sports event with one or more suicide bombers requires
the same general materials and widely available knowledge as a remotely detonated IED.
Terrorists may be more likely to use suicide attacks during cooler months at outdoor
stadiums where the bulky clothing necessary to conceal explosives would not appear out
of place. The weather, however, is not judged to be a decisive factor in terrorist planning.

(U//FOUO) The author of the Internet posting “How You Can Kill Thousands of
Americans with a Few Hundred Dollars and Three Men” recommended using three to
five “blond or black” American Muslim suicide bombers. To avoid detection, the
bombers would hide explosive belts under their clothing. The author also outlined how a
suicide bomber would detonate explosives inside the stadium, after which other
operatives would detonate their bombs at the exit gates where they expected spectators to
flee. The author believed the combined explosions would create a stampede that would
kill far more people than the bombings themselves.

(U//FOUO) Use of an aircraft to attack an occupied stadium may be an attractive option
for terrorists as the target is easily identifiable from the air and the concentration of
people would offer prospects for achieving mass casualties.

— (U//FOUO) The use of radio-controlled aircraft also has been discussed as a
possible method for delivering explosives or chemical or biological agents.
The amount of material such aircraft are capable of carrying is small, but the
psychological impact of an overflight visibly spraying even inert liquid could be
considerable. DHS/I&A has no reports indicating that any group is planning such
attacks.

(U//FOUO) Small aircraft towing banners or airships providing aerial advertising and
TV coverage are common at outdoor sporting events. Williams-Brice Stadium, the home
field for the University of South Carolina; Memorial Stadium, home field for Clemson
University; and Spartan Stadium, home field for Michigan State University, as well as
many other major colleges and universities, are located near general aviation airports.
The Federal Aviation Administration issues a “Notice to Airmen” prohibiting overflights
of stadium events, but no means of enforcement is available at most events.

(U//FOUO) In the event that a CBRN attack is attempted at a college venue, the complex
technical hurdles involved in effective delivery likely would limit the attacker’s ability to
cause mass casualties. Such an attempt, however, would create a great deal of panic and
media attention while potentially rendering the area of attack temporarily uninhabitable.

(U//FOUO) DHS/I&A, the SCIIC, and the MIOC assess that occupied collegiate sports
and entertainment venues remain an attractive target for international and domestic
terrorists. Campus and venue security officials are urged to remain vigilant and
immediately report any suspicious activities to law enforcement.