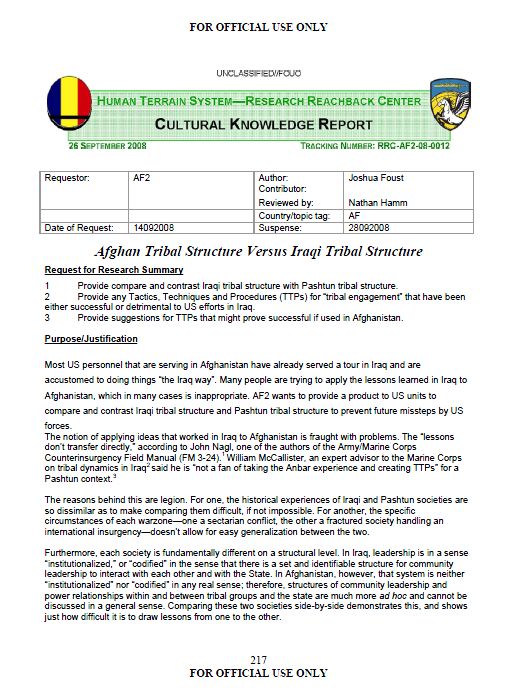 Most US personnel that are serving in Afghanistan have already served a tour in Iraq and are accustomed to doing things “the Iraq way”. Many people are trying to apply the lessons learned in Iraq to Afghanistan, which in many cases is inappropriate. AF2 wants to provide a product to US units to compare and contrast Iraqi tribal structure and Pashtun tribal structure to prevent future missteps by US forces.

The notion of applying ideas that worked in Iraq to Afghanistan is fraught with problems. The “lessons don’t transfer directly,” according to John Nagl, one of the authors of the Army/Marine Corps Counterinsurgency Field Manual (FM 3-24). William McCallister, an expert advisor to the Marine Corps on tribal dynamics in Iraq2 said he is “not a fan of taking the Anbar experience and creating TTPs” for a Pashtun context.

The reasons behind this are legion. For one, the historical experiences of Iraqi and Pashtun societies are so dissimilar as to make comparing them difficult, if not impossible. For another, the specific circumstances of each warzone—one a sectarian conflict, the other a fractured society handling an international insurgency—doesn’t allow for easy generalization between the two.

Furthermore, each society is fundamentally different on a structural level. In Iraq, leadership is in a sense “institutionalized,” or “codified” in the sense that there is a set and identifiable structure for community leadership to interact with each other and with the State. In Afghanistan, however, that system is neither “institutionalized” nor “codified” in any real sense; therefore, structures of community leadership and power relationships within and between tribal groups and the state are much more ad hoc and cannot be discussed in a general sense. Comparing these two societies side-by-side demonstrates this, and shows just how difficult it is to draw lessons from one to the other.

Thus, Pashtun society does not lend itself to a TTP-style set of procedures. Rather, “Guiding Principles” would be more effective in formulating an engagement policy based on the organizing principles in Pashtun society. An initial list follows:

• Accept Ambiguity. People will lie and twist the truth to suit their own ends, saying only what they want someone else to know. Accepting that one cannot know for certain the unalterable truth of a situation is important for being able to engage each leader or influencer on his own terms.
• There Is No Silver Bullet. Each valley, and each tribe, has its own unique set of needs and concerns. There is no universal approach or solution for engagement, but working through (instead of above or around) culture is vital.
• Understand Processes. The VIPs for a given problem vary from situation to situation. Understanding how and why that is—and only then figuring out who—is the only way to guarantee a successful engagement. Conversely, crafting policy based on a single point of view will distort local relationships as influence is leveraged for personal power, and this can erupt in unpredictable ways.
• Nothing is Quick. Afghanistan is a fundamentally relationship-based society. Building relationships takes time—sitting over tea, hours of small talk, expressing genuine concern for well-being. Afghans understand that anyone they talk to will be gone the following year. There is no substitute for taking the time required to build trust, and more importantly passing along that trust to subsequent units.