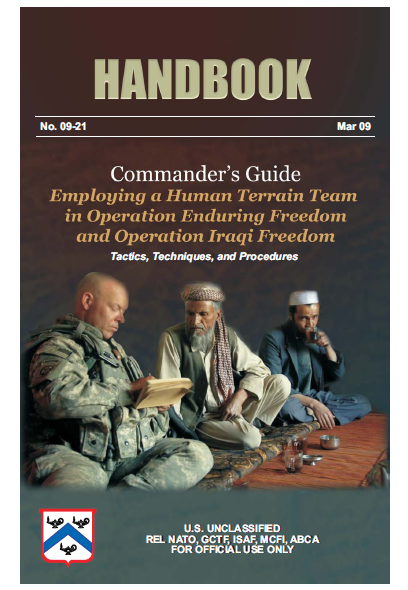 The Human Terrain System (HTS) is a proof-of-concept program run by the U.S. Army Training and Doctrine Command (TRADOC). The goal of HTS is to provide knowledge of the local population (the human terrain) to Army/military commanders to:

• Assist them in understanding the people within their area of operations (AO).
• Enable them to make better-informed decisions.
• Reduce the chance for negative effect responses such as improvised explosive device events directed at American troops.

There are currently 26 teams embedded at all echelons above brigade in both Iraq and Afghanistan, supporting both the U.S. Army and the U.S. Marine Corps (USMC).

Human terrain teams (HTTs) consist of five to nine personnel deployed by the HTS to support field commanders. HTTs fill the socio-cultural knowledge gap in the commander’s operational environment and interpret events in his AO. The team, individuals with social science and operational backgrounds, deploys with military units to bring knowledge about the local population into a coherent analytic framework. The teams also assist in building relationships with the local community in order to provide advice and opportunities to commanders and staffs in the field.

HTTs are regionally focused, modular, staff augmentees that bring to the unit capabilities that exist outside organic unit structures. They deploy as trained and organized teams attached to USMC regimental combat teams, Army brigade combat teams, division-level headquarters, and higher-command echelons. Each team is recruited and trained for a specific region, and the team deploys and embeds with their supported unit. The HTT integrates into the unit staff, conducts unclassified open-source and field research, and provides focused and operationally-relevant human terrain information in support of the planning, preparation, execution, and assessment of operations.

There are three key points to highlight in the Human Terrain System (HTS) mission statement. The first is social science research. Social science research is not simply “atmospherics,” rumor, or personal opinions. Social science research involves empirical and verifiable analysis of the population to provide an accurate picture to the command of the local environment. Each HTT has an embedded social scientist skilled at developing and executing field research. The HTT takes the unit’s plans or orders and develops a research plan that accounts for the commander’s critical information requirements (CCIR) as well as perceived gaps in the unit’s socio-cultural knowledge. This research plan identifies the knowledge requirements the team can address through specific missions among the population. The team uses both qualitative and quantitative methodologies based on the information required by the command.

The second key point is ensuring that gathered data is relevant to the military’s mission. Although there may be a huge amount of data about the local population available to the U.S. military, only a small part of that data will have any operational relevance in a given situation. For example, while it might be interesting to know that Iraqi Sunnis have a tradition during weddings of putting henna on the hands of the newlyweds, this has no operational relevance. On the other hand, understanding the tradition of celebratory gunfire may have huge operational relevance to the military. One of the key functions of the team is to take the data from its social science research, couch it in terms familiar to a military audience, and ensure it is operationally relevant to the unit’s operations and problem-set.

Finally, HTTs create an analytic socio-cultural framework for operational planning, preparation, execution, and assessment. The team must not only conduct relevant research and make it usable for the unit, it must also ensure the research is incorporated into the military decisionmaking process (MDMP). Human terrain information is of no use to the unit unless it is integrated into the continuous planning processes conducted by the commander and staff and used to update the various staff estimates. Units must tie the team into all planning processes, including relevant working groups and assessment boards, that can utilize human terrain information for socio-cultural understanding.

Units should fully implement the human terrain team (HTT) into their planning processes. The team leader and social scientist should be the principal advisors to the commander and staff. The HTT should ensure all unit activities take into account the human terrain of the area of operations (AO). HTTs should participate in a variety of working groups, cells, and meetings within the staff (e.g., S3, battle update briefing, and information operations [IO] working group). HTT personnel can be used to maximize the staff’s ability to improve the understanding of human terrain within the AO. HTTs provide three primary capabilities:

• Expert human terrain and social science advice, based on constantly updated, user-friendly, ethnographic, and socio-cultural databases of the AO that leverage existing bodies of knowledge from the social sciences and humanities and ground research conducted by the team
• Focused study on socio-cultural issues of specific concern to the commander
• Tactical overwatch through a link to the reach-back research center, which provides direct support to the HTTs and access to its subject-matter expert network and learning institutions throughout the world

Beyond analysis and assessment of local attitudes, perceptions, and behaviors, the HTT can also provide analysis of how U.S. military behavior impacts the local population’s willingness to work with coalition forces. This analysis allows the supported commander to evaluate the effects of his operations and tailor his interactions with the local population for best effect.