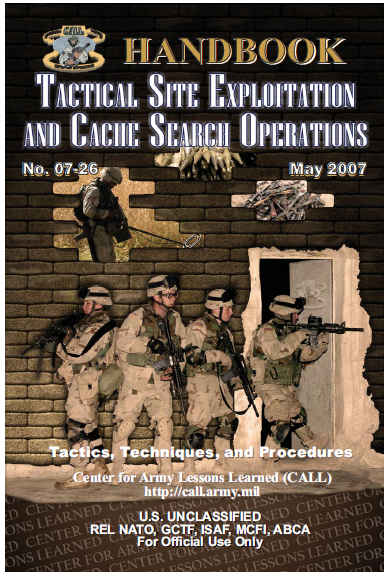 This handbook was written to assist Soldiers and leaders at the platoon, company, and battalion level to better understand the importance of their actions on an objective, as well as to teach the fundamentals of tactical site exploitation (TSE) and cache search operations. While selecting the right Soldiers to be on a TSE team is important, the Soldiers and leaders must also understand the importance of the TSE process and the end results of their efforts. Proper TSE fuels the intelligence-operations cycle and may quickly answer the commander’s critical information requirements and assist in the criminal prosecution of detainees.

If done correctly and patiently, TSE focuses units on operations that have a higher chance of follow-on success and thus serves as a force multiplier. When not conducted correctly or when the enemy situation does not allow TSE, an attack, find, or event becomes a singular occurrence in yet another operation or platoon mission, and it becomes harder for Soldiers to understand the purpose of what they are doing. Teaching Soldiers and leaders the importance of proper intelligence and evidence procedures enables them to think on a multifaceted scale, to see the details they missed before, and to better understand the commander’s intent and their operational environment.

To that end, teaching Soldiers and leaders time-proven cache search fundamentals; principles; and tactics, techniques, and procedures furthers this education. Soldiers and leaders start to think about how their enemy thinks and how to get inside his operational cycle and force him into the open to be killed or captured.

Tactical site exploitation (TSE) is the action taken to ensure that documents, material, and personnel are identified, collected, protected, and evaluated in order to facilitate follow-on actions. TSE focuses on the actions taken by Soldiers and leaders at the point of initial contact. When conducted correctly, TSE can provide further intelligence for future operations, answer information requirements, and provide evidence to keep detainees in prison.

TSE, which includes tactical questioning (TQ), at the squad and platoon levels feeds intelligence/evidence up the chain of command to the company and battalion, where it is exploited for immediate operations. Subsequently, the information is processed at the brigade or theater fusion cells for further analysis and exploitation with specialized teams/assets. This analysis fuels future operations, which in turn produces more intelligence, constantly fueling the targeting cycle. This cycle can quickly take apart the network of an insurgency or at least damage it to such an extent as to make it a low-level threat.

For example, the documents or equipment found in a cache produce fingerprints. A follow-up cordon and knock operation in the vicinity of the cache and the proper use of biometrics equipment produce a matching set of fingerprints from a detainee. Thorough TQ of the detainee produces a name and a meeting location. A surveillance operation of the meeting location produces further intelligence and a subsequent raid, which produces more intelligence and evidence. Without proper TSE at the cache, the fingerprints would have been destroyed, and no subsequent operations would have been identified through the targeting process. 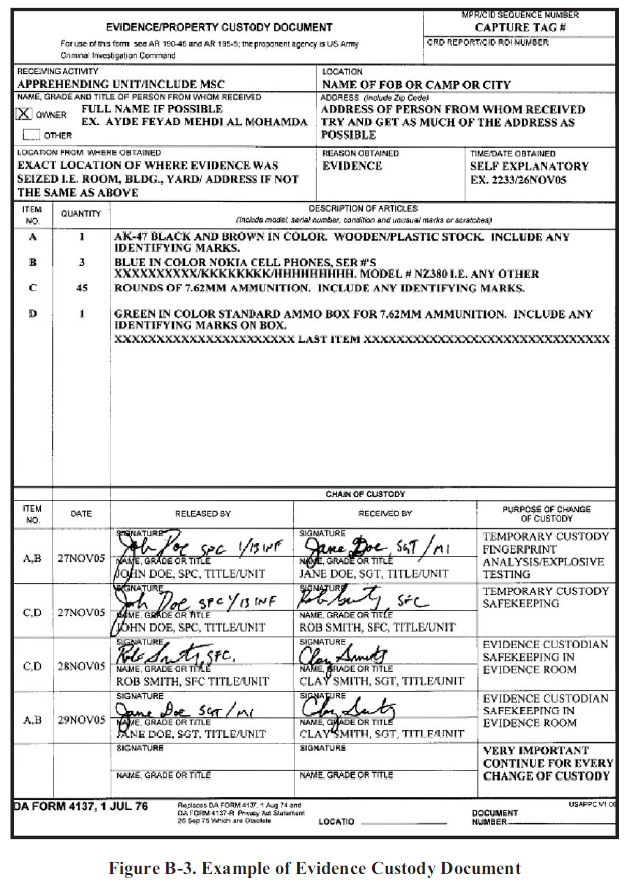