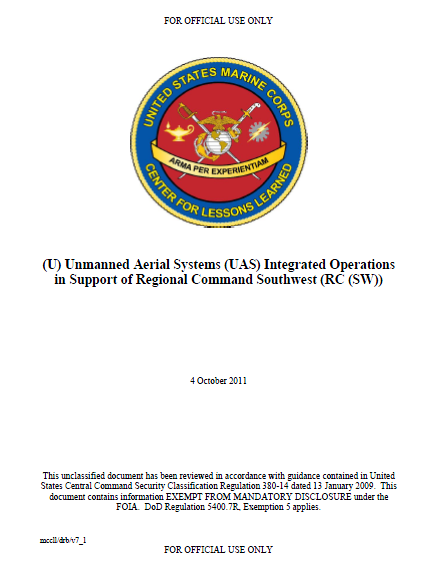 (U//FOUO) The RQ-7B Shadow UAS employed by the Marine Corps is a U. S. Army program of record. Because it is an Army program the Shadow has very high frequency (VHF) but no ultra-high frequency (UHF) retransmission capability. UHF is the primary means of communication between key elements of the Marine air command and control system (MACCS), airborne Marine Corps aviation assets, and Marine joint terminal attack controllers (JTAC) and forward air controllers (FAC). Developing a UHF retransmission capability for an organic USMC UAS was regarded as a primary need.

(U//FOUO) USMC units were dependent on joint assets for armed UAS missions and competed with virtually every other combat unit in OEF to schedule armed UAS sorties. Developing an organic armed USMC UAS was regarded as a priority.

(U//FOUO) The establishment of the MARCC initially generated operational friction between the RC (SW) ACE and the ground combat element (GCE). The ACE regarded the MARCC as a more efficient means of conducting command and control of ACE assets. However, the GCE had been accustomed to a greater degree of autonomy in employing UASs and perceived the establishment of the MARCC as an impediment to responsiveness and their ability to dynamically retask UASs as desired.

(U//FOUO) As the ground scheme of maneuver evolved, establishing and supporting UAS “hubs” and “spokes” in proximity to ground forces posed a significant challenge to 3d MAW (Fwd) planners. [MCCLL Note: A hub is a UAS airfield base of operations used to launch and recover UASs and a spoke is a scalable outlying UAS control site supported by the hub.] In addition to requiring facilities suitable for the launch, recovery, and maintenance of UASs, a key consideration was the appropriate manning of each hub and spoke. A significant limiting factor in the MAW’s ability to establish hubs and spokes was a lack of trained intelligence analysts, UAS mission commanders, and maintenance personnel (this included contract maintenance support for the ScanEagle UAS due to contractor habitability mandates subject to that contract).

(U//FOUO) The volume of UAS sorties and their importance to the MAGTF is expected to increase in the future, including the development of a logistics support UAS and a new small tactical unmanned aerial system (STUAS). This has generated a need to determine where UAS assets would best be located within the ACE of the MAGTF. The Marine Unmanned Aerial Vehicle Squadron ONE and TWO (VMU-1 / VMU-2) commanding officers believed they should be located within a Marine aircraft group (MAG) just as all USMC aviation squadrons. [MCCLL Note: The VMUs are located within the Marine air control group (MACG) in garrison. During OEF deployment the VMUs were located directly within the MAW (Fwd) because there were no deployed MAGs and the MACG was composed of a small detachment.]

(U//FOUO) VMU-1 established a “hot weather schedule” during the summer months due to temperatures that could reach as high as 135 degrees Fahrenheit on the runway. This extreme heat could cause the Shadow’s wings to swell and vent fuel. However, the ScanEagle did not have this significant a problem with the heat and has longer endurance, so, the VMU scheduled ScanEagle sorties earlier in the day but still sufficient to cover the hottest time of day and Shadow sorties in the morning or evening. This enabled the VMU to maintain coverage throughout the fly-day. VMU-1 also erected a large area maintenance shelter for aircraft maintenance (LAMS-A) in order to keep aircraft and personnel out of the heat.

(U//FOUO) UAS technologies and capabilities continue to be developed and fielded. Training and education of UAS users, including unit air officers, intelligence officers, FACs, JTACs, and joint fires observers (JFO), regarding new capabilities and how best to employ UASs is vital. In order to support this, sufficient UAS assets must be made available during pre-deployment training.

(U//FOUO) The Marine Corps has recently fielded the Satellite Wide-Area Network version 2 (SWANv2) that will be included in the VMU organic table of equipment. Unlike the Digital Video Broadcasting Return Channel via Satellite (DVB-RCS) system currently being used, SWANv2 is a Marine Corps program of record that will enable the VMUs to disseminate full-motion video (FMV) signals more effectively.

(U//FOUO) In July, 2010, a contract was awarded to Boeing subsidiary Insitu, Inc. for development and production of the STUAS. STUAS will be used by the U.S. Navy and Marine Corps to provide persistent maritime and land-based tactical reconnaissance, surveillance, and target acquisition (RSTA) data collection and dissemination. Unlike the current ScanEagle and Shadow UASs, STUAS will have a UHF retransmission capability and the modularity to carry “plug-and-play” mission payloads such as hyper-spectral imaging sensors, synthetic aperture radar sensors, and potentially small precision-guided munitions (PGM) among others.

(U//FOUO) The MARCC officer-in-charge (OIC) developed a comprehensive kneeboard card that had information regarding all of the unmanned assets that were going to be airborne during a particular fly-day. This provided aircrew with situational awareness that was critical to safety of flight and helped reduce the chance of mid-air collisions. The kneeboard card also provided time, location, and contact frequency information that could be used to more effectively and efficiently employ or retask UASs.

(U//FOUO) The RC (SW) ISR officer noted that they were building a “collection strategy playbook” that would describe different tactics, techniques, and procedures (TTP) that have proved successful in integrating different intelligence collections effects. For example: layering ground-moving-target-indicator data with dismounted-moving-target-indicator assets (two different kinds of radar) and integrating those with a wide-area surveillance sensor (such as a UAS, Ground Based Operational Surveillance System (GBOSS), or Aerostat balloon) in support of real-time operations.

(U//FOUO) The fact that there is no primary military occupational specialty (MOS) designator for UAS officers degraded the ability of the VMUs to retain corporate knowledge and experience within the UAS community. Instead, officers were assigned to VMUs for 18 – 24 month tours of duty, a substantial portion of which was spent in training, and usually never returned to the UAS community after transferring out. 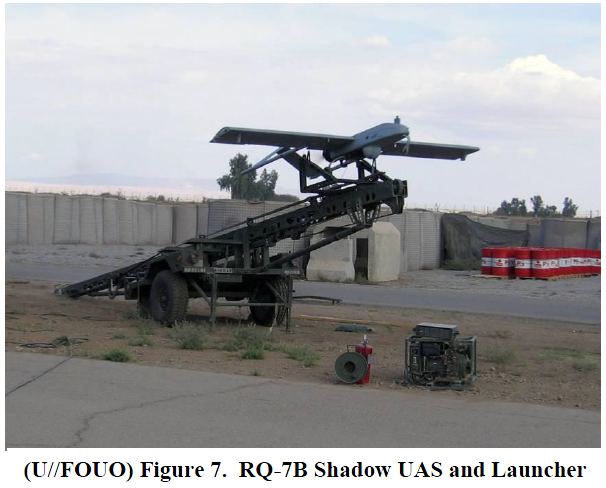