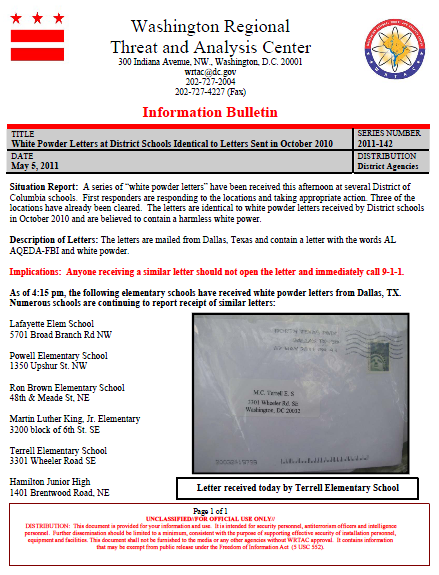 Situation Report: A series of “white powder letters” have been received this afternoon at several District of Columbia schools. First responders are responding to the locations and taking appropriate action. Three of the locations have already been cleared. The letters are identical to white powder letters received by District schools in October 2010 and are believed to contain a harmless white power.

Description of Letters: The letters are mailed from Dallas, Texas and contain a letter with the words AL AQEDA-FBI and white powder.

Implications: Anyone receiving a similar letter should not open the letter and immediately call 9-1-1.

As of 4:15 pm, the following elementary schools have received white powder letters from Dallas, TX. Numerous schools are continuing to report receipt of similar letters: