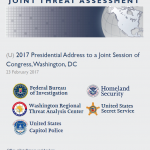 This Joint Threat Assessment (JTA) addresses threats to the 2017 Presidential Address to a Joint Session of Congress (the Presidential Address) at the US Capitol Building in Washington, DC, on 28 February 2017. This assessment does not consider nonviolent civil disobedience tactics (for example, protests without a permit) that are outside the scope of federal law enforcement jurisdiction; however, civil disobedience tactics designed to cause a hazard to public safety and/or law enforcement fall within the scope of this assessment.

Since 2007 an unknown subject has sent more than 360 letters containing a white, powder substance to various government officials, public schools and other locations. In May, 2011 20 letters were delivered to public schools in Washington, DC. Over the past two days similar letters have been received in Washington, DC; New York, New York; Dallas, Texas and Enfield, Connecticut.

A series of “white powder letters” have been received this afternoon at several District of Columbia schools. First responders are responding to the locations and taking appropriate action. Three of the locations have already been cleared. The letters are identical to white powder letters received by District schools in October 2010 and are believed to contain a harmless white power.

Recently, alcoholic energy drinks have been making national headlines related to multiple hospitalizations for alcohol poisoning among college students. These hospitalizations have resulted in several universities banning the alcoholic energy drinks from campuses. Lawmakers in several states, including New York, have sought to ban the drinks, though no legislation has passed yet. These drinks mix alcohol with caffeine. Alcoholic energy products are marketed to look like energy drinks on grocery shelves, but can pack a real alcoholic punch. Four Loko is a popular brand, but not the only alcoholic energy drink under scrutiny. In the case of Four Loko, the 23.5-ounce drink is 12 percent alcohol and roughly equivalent to drinking five 12-ounce beers. The drink also has about a cup’s worth of coffee, according to the manufacturer. There’s a very common misconception that if you drink caffeine with an alcoholic beverage the stimulant effect of the caffeine counteracts the depressant effect of the alcohol and that is not true.

The Los Angeles Joint Regional Terrorism Threat Assessment Center (LAJRIC) distributed a public safety bulletin on an emerging suicide method using helium and an “exit hood.” Helium suicides are still relatively rare however, in the last several years, information about the use of helium as a certain, fast, and painless suicide method has spread on the Internet and in various suicide handbooks. First responders have encountered helium suicides and other variations of this suicide method using chemicals which are hazardous to first responders in the District or National Capitol Region. The WRTAC is issuing the below information for situational awareness and investigative purposes only.