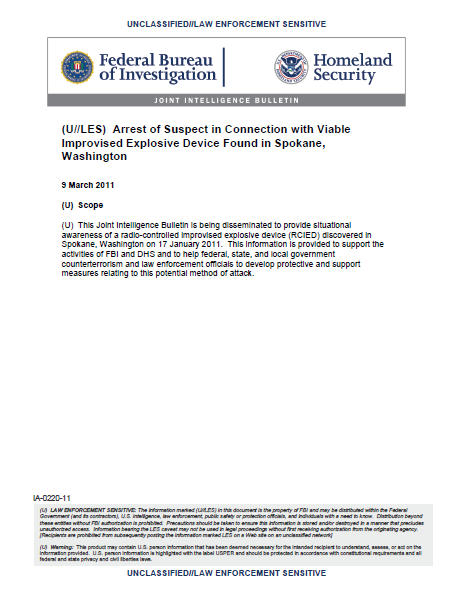 (U//LES) Kevin William Harpham was arrested in Colville, Washington by federal law enforcement on 9 March 2011 in connection with the improvised explosive device (IED) found along the route of a Martin Luther King, Jr. Day “MLK Unity March” in Spokane, Washington on 17 January 2011.

(U//LES) On 17 January 2011, three sanitation workers in Spokane, Washington discovered a Swiss Army backpack containing an RCIED immediately prior to the Martin Luther King, Jr. Day “MLK Unity March.” The device was placed along the parade route. Based on preliminary forensic examinations, we assess with medium confidenceii that the IED was designed to fire directional fragmentation similar to a single shot shotgun with buckshot or cannon with a grapeshot round. We likewise assess that the device was viable and could have caused personal injury or death.

(U//LES) Although the use of a radio-controlled trigger suggests the bomb maker possesses a greater degree of knowledge and skill than the typical pipe bomb builder, the device incorporated components that are commonly available in the United States and relied on techniques published in open sources. Preliminary technical analysis of the device’s construction indicates that fishing weights coated in rat poison were intended as directional shrapnel to create an anti-personnel device similar to a shotgun. 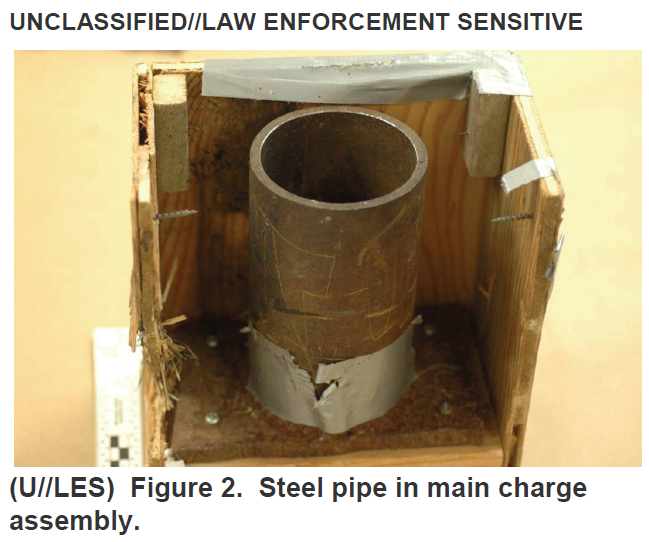 (U//LES) Preliminary examination of the device indicates the device was viable, but it did not receive the initiation signal from the transmitter. However, it has not been determined whether initiation of the device was attempted. Personal injuries most likely would have occurred in areas of close proximity to the explosion. The components used to construct the device are relatively common in IEDs exploited by the FBI and are readily available in the United States—including car alarms, batteries, black powder, lead fishing weights, and steel pipe.

— (U//LES) The main charge assembly consisted of a steel pipe with a hole drilled at its base (see Fig. 2). The pipe was welded to a roughly cut steel plate. The main charge was chemically identified as low explosive black powder, which was contained in a plastic bag and further contained in a white polyvinyl chloride (PVC) pipe. All of these components are commonly used in pipe bombs.
— (U//LES) While not yet confirmed, the initiator appears similar to a rocket motor igniter (RMI). An RMI was used in a crude IED carried by a lone individual who took hostages and threatened employees in the Discovery Channel Building in Silver Spring, Maryland on 1 September 2010.
— (U//LES) The device incorporated a car alarm receiver designed to receive the signal from a matching transmitter held by the perpetrator(s), which has not yet been identified or recovered. The use of car alarms in RCIEDs is not unique.
— (U//LES) The black powder charge was intended to propel lead fishing weights as shrapnel (see Fig 3). Lead weights and ball bearings are commonly used in pipe bombs as shrapnel, and their use is discussed in several violent extremist publications. The lead weights were covered in a green substance, which chemical examination confirmed as containing brodifacoum, one of several active ingredients in rat poison. Due to the presence of this particular ingredient in numerous types of rat poison, the particular brand cannot be determined.
— (U//LES) The entire pipe IED assembly was contained within an open-ended plywood box wrapped in several t-shirts, which in turn were wrapped several times with tape. This bundle was concealed in the backpack.