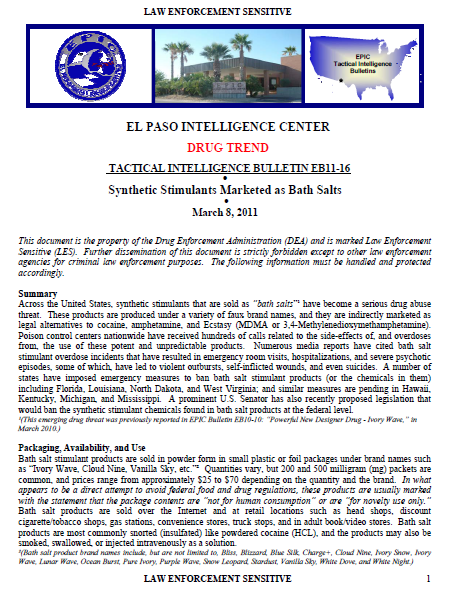 Packaging, Availability, and Use

Bath salt stimulant products are sold in powder form in small plastic or foil packages under brand names such as “Ivory Wave, Cloud Nine, Vanilla Sky, etc.” Quantities vary, but 200 and 500 milligram (mg) packets are common, and prices range from approximately $25 to $70 depending on the quantity and the brand. In what appears to be a direct attempt to avoid federal food and drug regulations, these products are usually marked with the statement that the package contents are “not for human consumption” or are “for novelty use only.” Bath salt products are sold over the Internet and at retail locations such as head shops, discount cigarette/tobacco shops, gas stations, convenience stores, truck stops, and in adult book/video stores. Bath salt products are most commonly snorted (insulfated) like powdered cocaine (HCL), and the products may also be smoked, swallowed, or injected intravenously as a solution.

Most of the bath salt stimulant products on the market today likely contain MDPV (3,4-Methylenedioxypyrovalerone) as the primary chemical stimulant. A small number of these products may contain mephedrone, which was sold as a “legal high” stimulant in Europe under the guise of research chemicals, bath salts, and/or plant food, from approximately 2007 through mid-2010. Widespread mephedrone use resulted in a large number of adverse reactions and multiple deaths, and measures to control the drug were enacted by several European countries in 2010 (e.g., mephedrone was outlawed in the UK in April 2010). Since that time, the synthetic stimulant MDPV in the form of “bath salts” has been increasingly promoted as a mephedrone substitute in retail venues and especially on the Internet. The stimulant chemicals contained in these products are believed to be manufactured in bulk quantities in China and India, and some of the actual products may be packaged for wholesale distribution at intermediate locations such as Eastern Europe. Mephedrone and MDPV are both synthetic derivatives of cathinone, which is the main chemical stimulant in Khat (Catha edulis). Cathinone is a potent central nervous system (CNS) stimulant that is structurally similar to amphetamine. The misuse of cathinone derivatives is not new. Methcathinone (ephedrone) was originally used as an antidepressant in the former Soviet Union in the 1930s, and was abused recreationally there during the 1970s and 1980s. Six synthetic cathinones that were closely related to pyrovalerone were also reported in Germany between 1997 and 2004. Available information indicates that synthetic cathinones do not produce a colored reaction with the Marquis field test kits, but they may be identified through laboratory testing with Gas chromatography/mass spectrometry (GC/MS) and infrared (IR) spectroscopy.