The following is the “law enforcement sensitive” version of the most recent gang threat assessment released by the FBI’s National Gang Intelligence Center in early 2012.  It contains more than twenty pages of additional material not included in the public version of the report.  Sections of the document that contain information not included in the public report are prefaced with either the (U//FOUO) or (U//LES) marking.  For more information on the differences between the two versions of the report, see our article on the subject. 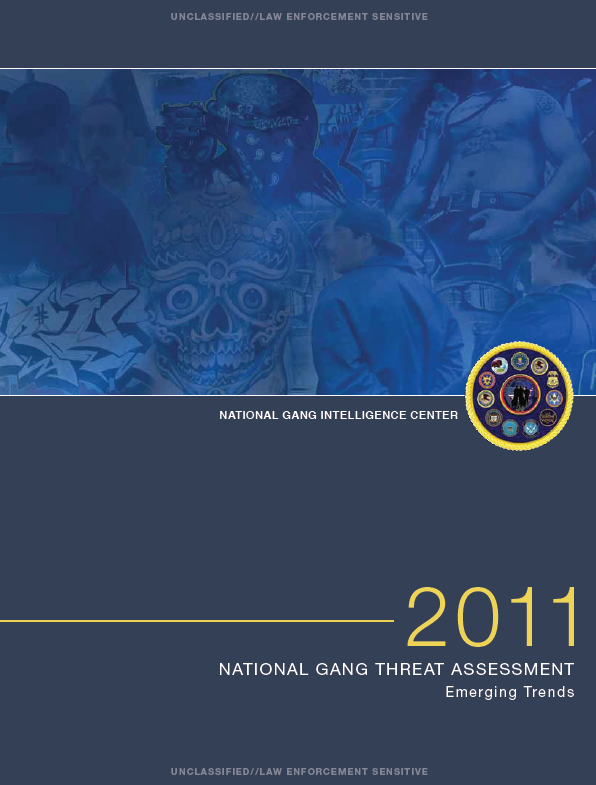 (U) Street, prison, and motorcycle gang membership and criminal activity continues to flourish in US communities where gangs identify opportunities to control street level drug sales, and other profitable crimes. Gangs will not only continue to defend their territory from rival gangs, but will also increasingly seek to diversify both their membership and their criminal activities in recognition of potential financial gain. New alliances between rival gangs will likely form as gangs suspend their former racial ideologies in pursuit of mutual profit. Gangs will continue to evolve and adapt to current conditions and law enforcement tactics, diversify their criminal activity, and employ new strategies and technology to enhance their criminal operations, while facilitating lower-risk and more profitable schemes, such as white collar crime.

(U) The expansion of communication networks, especially in wireless communications and the Internet, will allow gang members to form associations and alliances with other gangs and criminal organizations—both domestically and internationally—and enable gang members to better facilitate criminal activity and enhance their criminal operations discreetly without the physical interfacing once necessary to conduct these activities. (U) Changes in immigrant populations, which are susceptible to victimization and recruitment by gangs, may have the most profound effect on street gang membership. Continued drug trafficking-related violence along the US Southwest border could trigger increased migration of Mexicans and Central Americans into the United States and, as such, provide a greater pool of victims, recruits, and criminal opportunities for street gangs as they seek to profit from the illegal drug trade, alien smuggling, and weapons trafficking. Likewise, increased gang recruitment of youths among the immigrant population may result in an increase in gang membership and gang-related violence in a number of regions.

(U) Street gang activity and violence may also increase as more dangerous gang members are released early from prison and re-establish their roles armed with new knowledge and improved techniques. Prison gang members, already an ideal target audience for radicalization, may expand their associations with foreign gang members or radical criminal organizations, both inside correctional institutions and in the community upon their release.

(U//LES) Gang members armed with high-powered weapons and knowledge and expertise acquired from employment in law enforcement, corrections, or the military will likely pose an increasing nationwide threat, as they employ these tactics and weapons against law enforcement officials, rival gang members, and civilians. Associates, friends, and family members of gangs will continue to play a pivotal role in the infiltration and acquisition of sensitive information.

(U) Globalization, socio-political change, technological advances, and immigration will result either in greater gang expansion and gang-related crime or displace gang members as they search for criminal opportunities elsewhere. Stagnant or poor economic conditions in the United States, including budget cuts in law enforcement, may undercut gang dismantlement efforts and encourage gang expansion as police agencies redirect their resources and disband gang units and taskforces, as reported by a large number of law enforcement agencies.