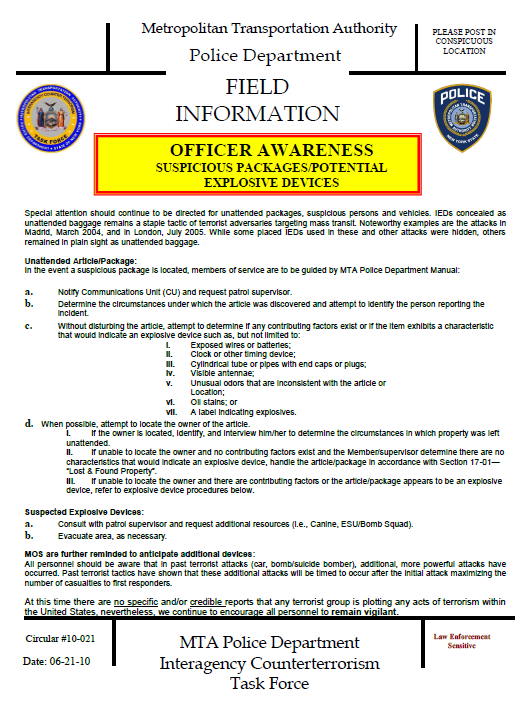 Special attention should continue to be directed for unattended packages, suspicious persons and vehicles. IEDs concealed as unattended baggage remains a staple tactic of terrorist adversaries targeting mass transit. Noteworthy examples are the attacks in Madrid, March 2004, and in London, July 2005. While some placed IEDs used in these and other attacks were hidden, others remained in plain sight as unattended baggage. Unattended Article/Package: In the event a suspicious package is located, members of service are to be guided by MTA Police Department Manual:

b. Determine the circumstances under which the article was discovered and attempt to identify the person reporting the incident.

c. Without disturbing the article, attempt to determine if any contributing factors exist or if the item exhibits a characteristic that would indicate an explosive device such as, but not limited to:

i. Exposed wires or batteries;

ii. Clock or other timing device;

iii. Cylindrical tube or pipes with end caps or plugs;

v. Unusual odors that are inconsistent with the article or Location;

d. When possible, attempt to locate the owner of the article.

i. If the owner is located, identify, and interview him/her to determine the circumstances in which property was left unattended.

ii. If unable to locate the owner and no contributing factors exist and the Member/supervisor determine there are no characteristics that would indicate an explosive device, handle the article/package in accordance with Section 17-01—“Lost & Found Property”.

iii. If unable to locate the owner and there are contributing factors or the article/package appears to be an explosive device, refer to explosive device procedures below.

b. Evacuate area, as necessary.

MOS are further reminded to anticipate additional devices: All personnel should be aware that in past terrorist attacks (car, bomb/suicide bomber), additional, more powerful attacks have occurred. Past terrorist tactics have shown that these additional attacks will be timed to occur after the initial attack maximizing the number of casualties to first responders. At this time there are no specific and/or credible reports that any terrorist group is plotting any acts of terrorism within the United States, nevertheless, we continue to encourage all personnel to remain vigilant.