This document was first released by the hacktivist collective known as Anonymous. 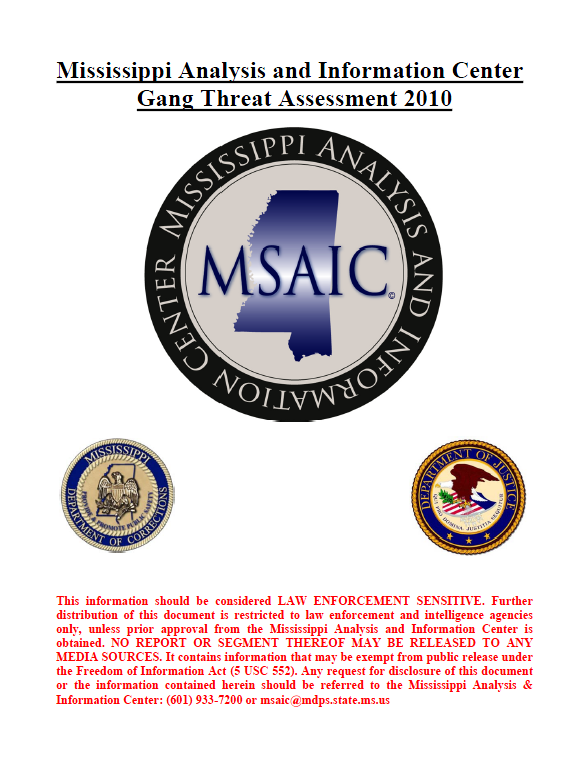 The following Gang Threat Assessment, prepared by the Mississippi Analysis and Information Center (“MSAIC”), was produced to provide a general outlook of gang presence and criminal activity in the State of Mississippi. Data in this report was obtained from the Mississippi Department of Corrections (“MDOC”) and provides statistics, research and key findings from corrections data, law enforcement reports as well as academic and open source research. This assessment is a follow-up from the Interim Gang Threat Assessment issued by MSAIC in September of 2010. The assessment contains crimespecific and corrections statistics attributed to the four most prevalent gangs (“core” gangs) in the state: Gangster Disciples, Simon City Royals, Vice Lords and Latin Kings. From the four core groups they are attributed to the higher affiliations which are Folk Nation (Gangster Disciples and Simon City Royals) and People Nation (Vice Lords and Latin Kings). The assessment also includes brief descriptions of other gangs including MS-13, Aryan Brotherhood and Outlaw Motorcycle Gangs.

Gang members in Mississippi continue to be involved in a number of criminal activities, the primary goal of which is to make money. Most frequently, gang members are incarcerated for drug violations, burglary, larceny, robbery, and assault. Although the gangs present in Mississippi may use the same name as the highly-organized, Chicago-based gangs, they primarily operate independently in Mississippi and do not appear to be in the hierarchy or in the direct control of the Chicago-based gangs.1 However, because some of the early organizers of the most prolific street gangs in the country have roots in Mississippi, the state has a unique relationship with these groups, their senior leadership and families.