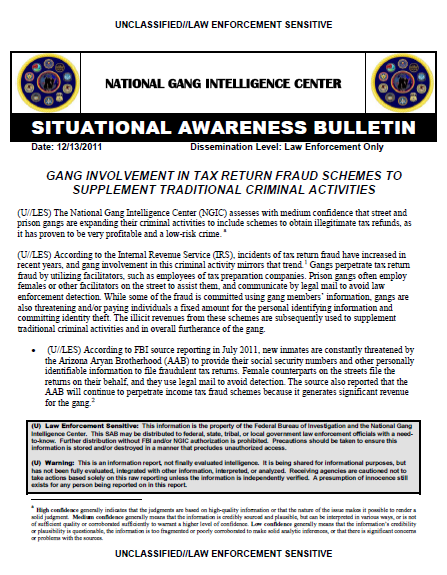 (U//LES) The National Gang Intelligence Center (NGIC) assesses with medium confidence that street and prison gangs are expanding their criminal activities to include schemes to obtain illegitimate tax refunds, as it has proven to be very profitable and a low-risk crime.

(U//LES) According to the Internal Revenue Service (IRS), incidents of tax return fraud have increased in recent years, and gang involvement in this criminal activity mirrors that trend. Gangs perpetrate tax return fraud by utilizing facilitators, such as employees of tax preparation companies. Prison gangs often employ females or other facilitators on the street to assist them, and communicate by legal mail to avoid law enforcement detection. While some of the fraud is committed using gang members’ information, gangs are also threatening and/or paying individuals a fixed amount for the personal identifying information and committing identity theft. The illicit revenues from these schemes are subsequently used to supplement traditional criminal activities and in overall furtherance of the gang.

• (U//LES) According to FBI source reporting in July 2011, new inmates are constantly threatened by the Arizona Aryan Brotherhood (AAB) to provide their social security numbers and other personally identifiable information to file fraudulent tax returns. Female counterparts on the streets file the returns on their behalf, and they use legal mail to avoid detection. The source also reported that the AAB will continue to perpetrate income tax fraud schemes because it generates significant revenue for the gang.
• (U//LES) According to FBI source reporting as of June 2011, money derived from an income tax fraud and identity theft ring in Statesboro, Georgia is being used to purchase guns and drugs for the Bloods street gang. Individuals involved in the scheme are collecting personal information of people they encounter in their places of employment and storing it until the following tax season, when a tax return is filed using the stolen information.
• (U//LES) According to FBI source reporting as of May 2011, income tax fraud is widespread amongst Gangster Disciple sets in western Tennessee. Gang members work with at least one outside employee of a tax filing company to submit fraudulent federal income tax statements despite having no legitimate work history or earnings.
• (U//LES) In December 2010, prison staff at California State Prison-Corcoran found a Black Guerilla Family (BGF) gang member at disseminating information to other inmates outlining the process to file fraudulent tax returns. The inmate was also directing that they use the “legal mail” process to avoid detection by staff.
• (U//FOUO) In May 2010, an FBI source indicated that a member of the AAB was committing fraudulent income tax schemes for members of the AAB and Arizona Mexican Mafia (AMM), by creating false W-2 forms and placing tax refunds on prepaid credit cards to be used by AAB and AMM members accordingly.
• (U//LES) According to source reporting as of April 2010, inmates at Clallam Bay Corrections Center with ties to the Aryan Family are funding drug purchases with money obtained by committing federal income tax fraud. To perpetrate this criminal activity, inmates’ personal information and power of attorney forms are mailed to outside facilitators to file the tax returns and cash the refund checks. The proceeds are split between gang members and facilitators and are subsequently used to smuggle methamphetamine into the facility through legal mail to avoid monitoring by corrections personnel.

(U//LES) Instances of tax return fraud committed by gangs will likely increase as they seek out opportunities to commit low-risk crimes and as they become aware of the fraud’s potential profits. Gangs may initially perpetrate this crime by filing returns for themselves or other gang members; however, once it is determined to be a financially viable endeavor, gangs will likely resort to intimidation tactics, committing identity theft, and forming alliances of opportunity with individuals and other criminal enterprises to continue to receive illegitimate refunds. Furthermore, gangs may seek out individuals such as employees of tax preparation companies to use their tax knowledge and expertise to identify and exploit new methods and tactics to commit tax fraud.