The following report was released by the UNODC May 5, 2013. 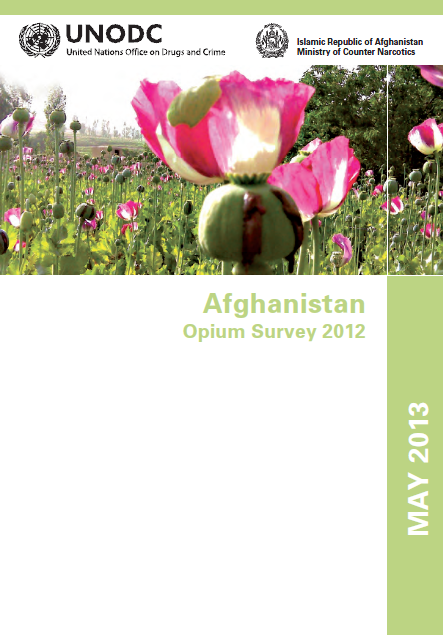 Afghanistan cultivates, produces and process narcotics that are a threat to the region and worldwide. However, the international community also needs to understand that Afghanistan itself is a victim of this phenomenon. The existence of hundreds of thousands of problem drug users, as well as decades of civil war, terrorism and instability are all related to the existence of narcotics in the country.

According to the findings of this survey, the total area under cultivation was estimated at 154,000 hectares, an 18 per cent increase from the previous year. Comparisons of the gross and net values with Afghan’s licit GDP for 2012 also serve to highlight the opium economy’s impact on the country. In 2012, net opium exports were worth some 10 per cent of licit GDP, while the farmgate value of the opium needed to produce those exports alone was equivalent to 4 per cent of licit GDP.

On the basis of shared responsibility and the special session of the United Nation’s General assembly in 1998, the international community needs to take a balanced approach by addressing both the supply and the demand side equally. In addition, more attention needs to be paid to reduce demand and the smuggling of precursors as well as provide further support to the Government of Afghanistan.