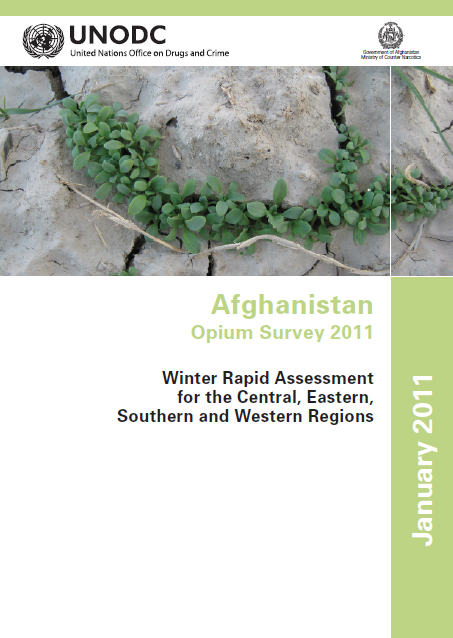 In 2011, the Opium Winter Assessment has been divided into two phases. The first phase was carried out in December 2010 and January 2011 and covered the Central, Eastern, Southern and Western region, where opium is sown in fall 2010. A second phase will take place in February-March 2011 and will cover the Northern and Northeastern region, where opium poppy is in spring. This report presents the findings of the first phase, which covers the main poppy cultivation provinces in the Southern and Western region.

Based on a qualitative assessment of cultivation trends, the winter assessment in the south, west, central and east of Afghanistan predicts an overall slight decrease in opium cultivation for 2011 in this region. This follows a stable opium cultivation estimated in 2010 for the whole country, halting a declining trend in cultivation observed since 2007.

The result of this assessment indicates that the current high price of opium did not produce an increase in opium cultivation in the highest cultivating provinces of Hilmand and Kandahar. In these two provinces the cultivation is expected to decrease in 2011. The reasons for this development were multiple and differed from area to area. In parts of Hilmand and Kandahar, farmers reported the persistence of cold and dry climate conditions which led to crop failure as the poppy would not germinate. There also been a changing political environment in Hilmand with the Governor taking initiatives to convince elders and farmers to reduce the amount of poppy planted. This was not systematically captured by the survey, but it may have played a role as well. In both provinces, military operations were conducted by Afghan and international forces around the time of poppy planting in main poppy cultivating areas. Although these operations were not directed against poppy farmers, the coincidence of troupes being present at planting time may also have discouraged farmers from planting poppy.

In the western provinces namely Farah, Hirat Ghor and Nimroz, poppy cultivation is expected to increase. Similar increasing trends were observed in the eastern and central provinces namely Nangarhar, Kunar, Laghman, Kabul and Kapisa. However, these provinces would remain at lower level of cultivation as compared to Hilmand and Kandahar and their increase is not expected to offset the decrease in these two provinces. The increase in poppy cultivation in Ghor and Kapisa provinces may lead to the loss of their poppy-free status if poppy eradication is not implemented in time. The remaining provinces in the central and eastern regions, which were poppy-free in 2010, are expected to remain poppy-free.

Confirming the findings of the 2010 Afghanistan Opium Survey, the Winter Assessment indicated the strong association between insecurity, lack of agricultural assistance and opium cultivation. Villages with a low level of security and which had not received agricultural assistance in the previous year were significantly more likely to grow poppy in 2011 than villages with good security and those, which had received assistance. Similarly, villages which had been targeted by an anti-poppy awareness campaign were significantly less likely to grow poppy in 2011.

The findings of the Winter Assessment in the Southern region are encouraging. A combination of events seemed to have contributed to this development: dry weather, efforts directed against poppy cultivation and towards increasing government control as well as licit alternatives to poppy. It is premature to determine which of these factors had the bigger impact. But there also worrying signals which need to be carefully monitored: the possible return of Ghor and Kapisa provinces to poppy cultivation and the increasing cultivation trends in the Western and Eastern regions, especially in Nangarhar, which, in the past, has shown its potential to be a major poppy cultivating province. 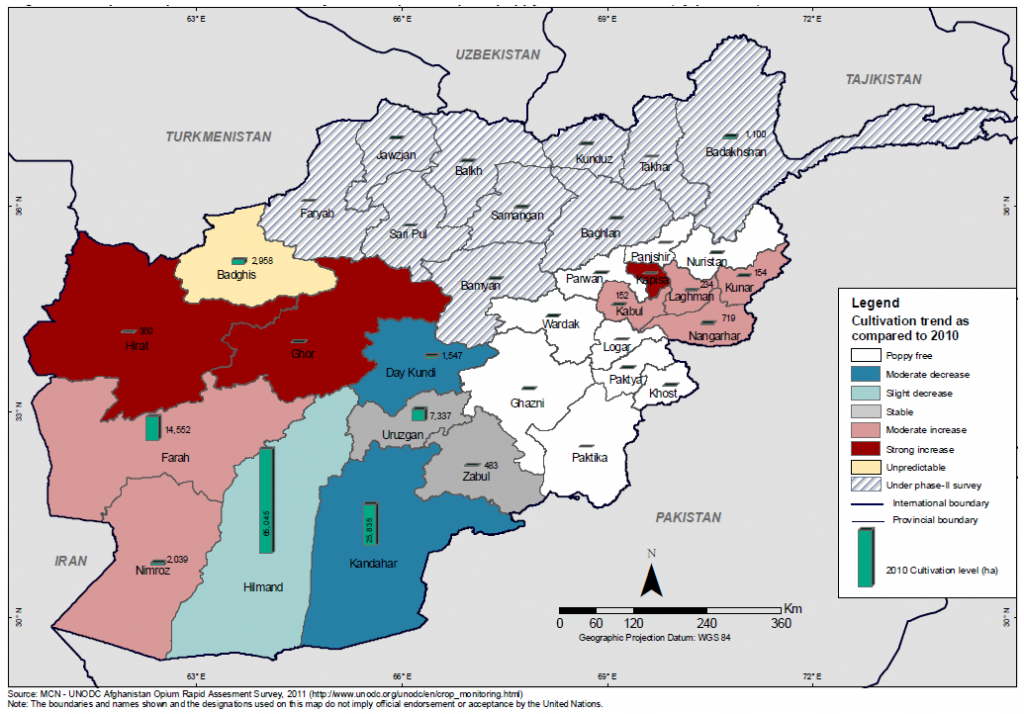