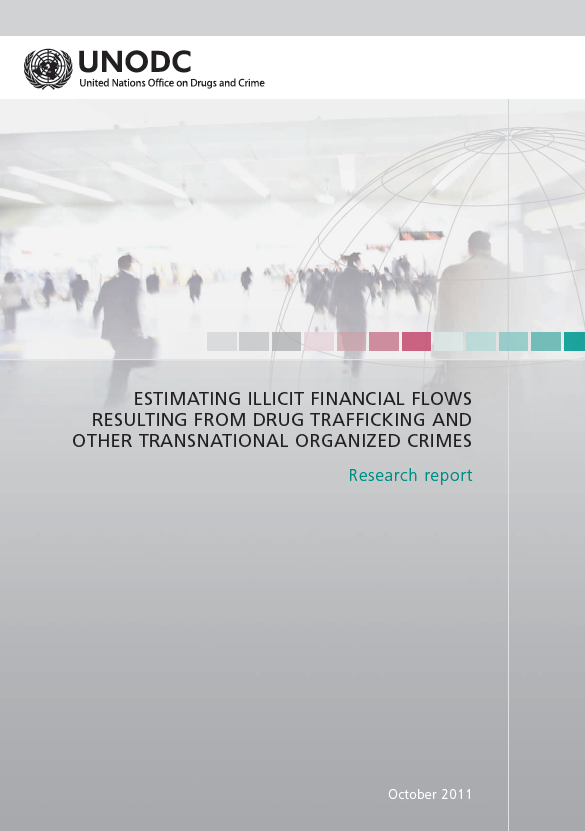 The purpose of this study was to examine the magnitude of illicit funds generated by drug trafficking and organized crime, and the extent to which they are laundered. Research in this area is still limited and results difficult to compare, but likely orders of magnitude may be estimated, though they should be treated with caution.

•• The most widely quoted figure for the extent of money laundered has been the IMF ‘consensus range’ of 2% to 5% of global GDP, made public by the IMF in 1998. A meta-analysis of the results from various studies suggests that all criminal proceeds are likely to amount to some 3.6% of global GDP (2.3%-5.5%), equivalent to about US$2.1 trillion (2009).

•• The best estimate for the amount available for laundering through the financial system, emerging from a meta-analysis of existing estimates, would be equivalent to 2.7% of global GDP (2.1%-4%) or US$1.6 trillion in 2009. Still within the IMF ‘consensus range’, this figure is located towards its lower end.

•• The largest income for transnational organized crime comes from illicit drugs, which account for some 20% (17%-25%) of all crime proceeds, about half of transnational organized crime proceeds and 0.6% to 0.9% of global GDP. In turn, drug-related proceeds available for money-laundering through the financial system would be equivalent to between 0.4% and 0.6% of global GDP.

•• Expressed as a proportion of national GDP, all crime proceeds appear to be generally higher in developing countries and tend to be laundered abroad more frequently.

•• The results also suggest that the ‘interception rate’ for anti-money-laundering efforts at the global level remains low. Globally, it appears that much less than 1% (probably around 0.2%) of the proceeds of crime laundered via the financial system are seized and frozen.

•• More in-depth research was undertaken, in the context of the present study, on illicit financial flows generated by the transnational organized crime market for cocaine and the distribution of these flows across regions. Overcoming the complexities of the problem and the lack of readily available data required innovative approaches.

•• The gross profits out of cocaine sales (totalling US$85 bn) were estimated at US$84 billion for the year 2009. (About US$1 billion were production costs, mainly going to farmers in the Andean region). Most of the profits (retail and wholesale) were generated in North America (US$35 bn) and in West and Central Europe (US$26 bn).

•• While the local cocaine market in South America (including Caribbean and Central America) are still rather small in dollar terms (U$S3.5 bn), the gross profits of organized crime groups operating in South America, selling the drugs to the local markets as well as to overseas markets rise to some US$18 billion.

•• The calculations, derived from estimates of the size of the market, the number of traffickers and the market structure (derived from individual drug seizures), suggested that, at the wholesale level, some 92% of global cocaine gross profits were available for laundering in 2009. The proportion fell to 46% at the retail level.

•• A new ‘gravity model’ was developed to show the likely laundering flows, based on indicators of the potential attractiveness of locations to money launderers. Out of more than US$84 billion in gross profits and some US$53 billion available for laundering, the base version of the gravity model predicts that some US$26 billion leave the jurisdictions where the profits were generated.

•• The largest outflows, according to the model, would take place from countries in North America (US$10 bn), South America (US$7 bn) and Europe (US$7 bn). These regions would together account for 95% of all cocaine profit-related outflows worldwide.

•• In terms of net outflows (outflows less inflows) the model suggests that the main destination outside the regions where the profits were generated would be the Caribbean, with net inflows of around US$6 billon, reflecting significant outflows from North America and South America. Such outflows do not appear to be compensated by inflows from other regions. The outflows from countries in Europe, in contrast, would be offset by inflows from other countries in Europe, North America and South America.

•• The presented outcome still relies on a large number of assumptions (number of traffickers, market structure, factors influencing the decisions of moneylaunderers) whose validity needs to be tested, opening a whole set of new research questions for the future.

•• Analysis of the socio-economic impact suggests that the most severe consequence of criminal funds is the further perpetuation and promotion of criminal activities. In the drug area, research indicates that the socio-economic costs related to drug abuse are twice as high as the income generated by organized crime; in some countries (USA, UK) one can even find a 3:1 ratio.

•• Criminal funds, even if invested in the legal economy, may create a number of problems, from distortions of the resource allocation, to ‘crowding out’ licit sectors and undermining the reputation of local institutions, which, in turn, can hamper investment and economic growth. The situation is less clear-cut for financial centres receiving illicit funds, but the long-term consequences may be negative if they do not actively fight money-laundering.