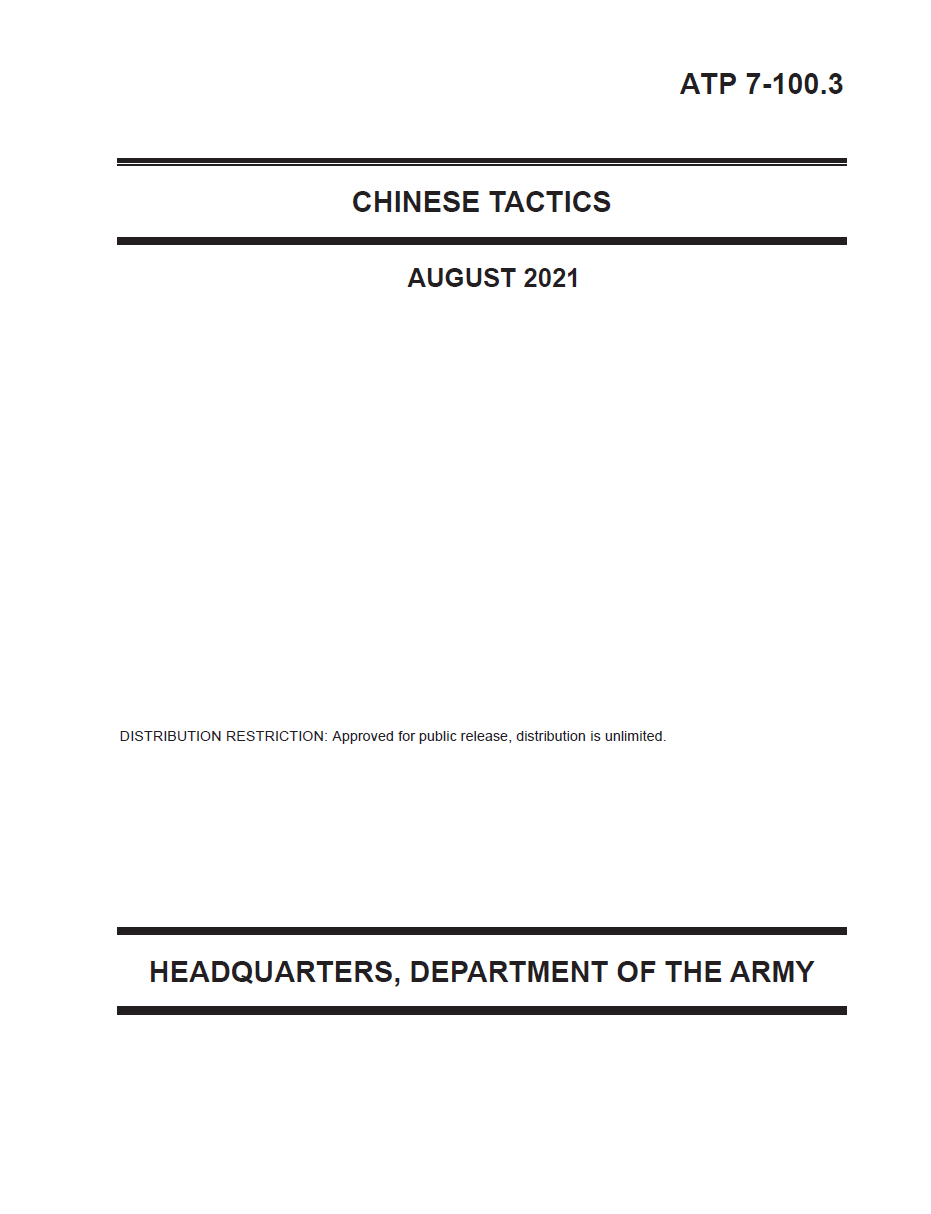 ATP 7-100.3 describes Chinese tactics for use in Army training, professional education, and leader development. This document is part of the ATP 7-100 series that addresses a nation-state’s military doctrine with a focus on army ground forces and tactical operations in offense, defense, and related mission sets. Other foundational topics include task organization, capabilities, and limitations related to military mission and support functions. ATP 7-100.3 serves as a foundation for understanding how Chinese ground forces think and act in tactical operations. This publication presents multiple examples of functional tactics in dynamic operational environment conditions. The tactics in this ATP are descriptive, and provide an orientation to tactics gathered from Chinese doctrine, translated literature, and observations from recent historical events.

1-3. The United States will maintain strong, though unofficial, support to the Republic of China—also known as Taiwan. The former will employ a policy of deliberate ambiguity to deter potential Chinese aggression against the island while maintaining a position respectful of Chinese policy toward the same.

1-4. China will continue to seek improved relations with Russia and India, with Russia likely proving a more amenable partner. China views improving these two relationships—particularly with Russia—as very important both politically and economically. Border tensions with India complicate bilateral relations and are often perceived by India as aggressive, requiring strong responses and adjustments to its defense posture.

1-5. Increasing competition for limited resources and the effects of global climate change will fuel conflict among both state and non-state actors. As populations increase, providing adequate quantities of basic necessities such as water, energy, food, and medical care becomes increasingly difficult. In addition, competition for human capital and raw materials for industry will increase as the international economy expands. Conditions such as natural disasters, extreme weather events, and their second- and third-order effects will have considerable impacts across the globe and will significantly influence political and military strategies worldwide. The global commons—the earth’s unowned natural resources, such as the oceans, the atmosphere, and space—will be increasingly important to the global economy and will thus likely become contested. The PLA characterizes many tasks related to these conditions under the heading of nontraditional security measures or military operations other than war.

1-6. As the global economy and disparate societies become increasingly interconnected, friction points continue to emerge. State and non-state actors are already using widely proliferated but immature technologies—such as social networking— worldwide to influence populations, politics, and policy. Actors will continue to leverage emerging connections to manipulate public opinion and influence leaders; the digital world will become an increasingly important front to contest. As national economies continue to intertwine themselves, competition for jobs, natural and manmade resources, and new or emerging markets will continue to intensify.

1-7. Technological advances will continue to enhance the lethality of capabilities across all domains. Soldiers at all echelons on the future battlefield will face unprecedented dangers as both new and proven technologies are integrated into warfighting. For example, precision munitions will continue to proliferate and become increasingly affordable as technology costs drop. At the same time, limited defense budgets coupled with the high expense and relative rarity of modern weapons systems—particularly aircraft, surface ships, and missiles of all types—will heavily influence future major combat scenarios.

1-8. China faces both nontraditional and hybrid threats. Such threats include criminal organizations, terrorist organizations, and fringe or rogue states. These threats effectively exploit complex terrain, such as dense urban and cyber environments, and are not necessarily constrained by international law or protocols regulating conflict.

Note. The chapters and appendixes of this publication address topics from the Chinese perspective. As such, the terms friendly refers to Chinese units or the units of Chinese allies. Enemy refers to units opposing China or its military. This may be a belligerent force or element within China, or an external actor. Parties are neutral regarding China. Threat uses the standard dictionary definition as opposed to that of U.S. doctrine. An opponent may be against either the U.S. or China, with context determining the correct interpretation.

Note. Chinese concepts and doctrinal phrases contained in this document are used in accordance with PLA definitions as provided by the translation of Army Combined Tactics under Conditions of Informationization and Infantry Unit Tactics. Some of these concepts and phrases may mirror the names of U.S. Department of Defense (DOD) and U.S. Army terms. In such cases, the U.S. term is being referenced only if the name appears in italics.

1-10. A useful analysis of the tactics of the PLA must be underpinned by an understanding of Chinese political and strategic priorities and an understanding of the complex relationship between the PLA and the Communist Party of China (CPC). China’s history is deeply intertwined with its military—more so than any Western nation and possibly more so than any other country, except North Korea. The PLA was the vanguard of the Chinese Communist Revolution; its history, from the Chinese perspective, is one of glorious struggle over imperialist and capitalist oppressors. In contrast to Western militaries, the PLA is deeply politicized. It retains significant ties to Maoist and Marxist-Leninist political thought and has generations-deep connections with the CPC. While Western militaries are generally apolitical and are divorced from political parties, the PLA is officially the armed wing of the CPC.

1-11. Despite China’s gradual economic liberalization and movement toward a capitalist, free-market economy, the PLA ostensibly remains generally steadfast in its support of Marxist-Leninist and Maoist philosophy. Though the PLA long ago abandoned more extreme Maoist experiments such as “rankless” force structures and eliminating rank insignia, the idea of People’s War—an armed struggle of a population against a militarily superior adversary—still colors PLA thinking. This concept eventually took the form of People’s War under Modern Conditions, an adaptation of Chinese Communist populist warfare that accounts for modern military capabilities. This in turn evolved to People’s War in Conditions of Informationization in 2015. This evolution suggests that the PLA now sees itself as having acquired sufficient information capabilities to successfully employ them in a limited or regional military capacity. Marxist-Leninist and Maoist thinking still influence PLA operations all the way down to the tactical level, where a mix of autocratic statism and communal leadership are practiced even within small organizations.

1-12. Chinese national political objectives can be broken into two basic categories: security and development. Security objectives include the protection of the CPC as China’s ruling party, the protection of Chinese sovereignty, protection of borders, internal security, and nuclear deterrence. Development objectives include the protection of Chinese economic interests at home and abroad, ensuring freedom of navigation for Chinese goods, procuring important commodities such as energy and raw materials, and establishing new export markets for Chinese goods. As China has transitioned from a closed, unstable, post-revolutionary internal political environment to a more open and stable one, strategic priorities have gradually shifted from security to development.

1-13. Today, with the primacy of the CPC virtually assured and few internal security threats, the People’s Armed Police (PAP) has taken over much of the internal security mission, while the PLA focuses primarily on development-related objectives. The coordination of military modernization with economic development is a basic tenet of Chinese national strategy, resulting in significant annual defense budget increases for the past two decades. This principle is now manifest in its Military-Civil Fusion program, which seeks greater cooperation between military and civilian elements in achieving shared objectives. An important objective of Military-Civil Fusion is leveraging civilian assets and capabilities as a cost-efficient method of managing limited military resources. Military-Civil Fusion can be thought of as an extension of People’s War, seeking to make best use of civilian assets and natural resources to underpin the growth and modernization of the PLA. 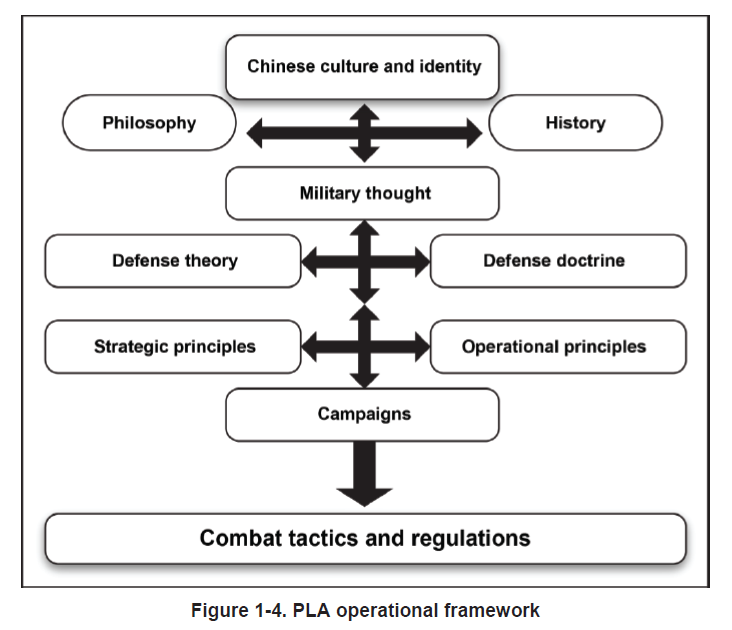 5-3. Chinese IO have four primary characteristics: universal permeation, high target value, the importance of integration and synthesis, and the linkage between attack and defense. These characteristics are described in paragraphs 5-4 through 5-7.

5-4. IO permeate all domains and are throughout all campaigns. Due to the widespread proliferation of advanced weapons systems, reliance on communications network technology, and information management systems, IO either govern or affect every aspect of modern conflict. Without information superiority, the Chinese believe that they cannot achieve dominance in any other domain, be it land, sea, air, or space. If the information battle is lost, initiative for the entire campaign cannot be achieved, and campaign activities will be fundamentally less efficient or otherwise blunted. IO are an ongoing and continuous process, while IW will likely begin before formal hostilities, making it a precursor to or first shot in active conflict. The conditions to achieve information superiority must be set prior to the commencement of hostilities, must actively support PLA forces during open conflict, and must be maintained through security and stability operations once open conflict has concluded. 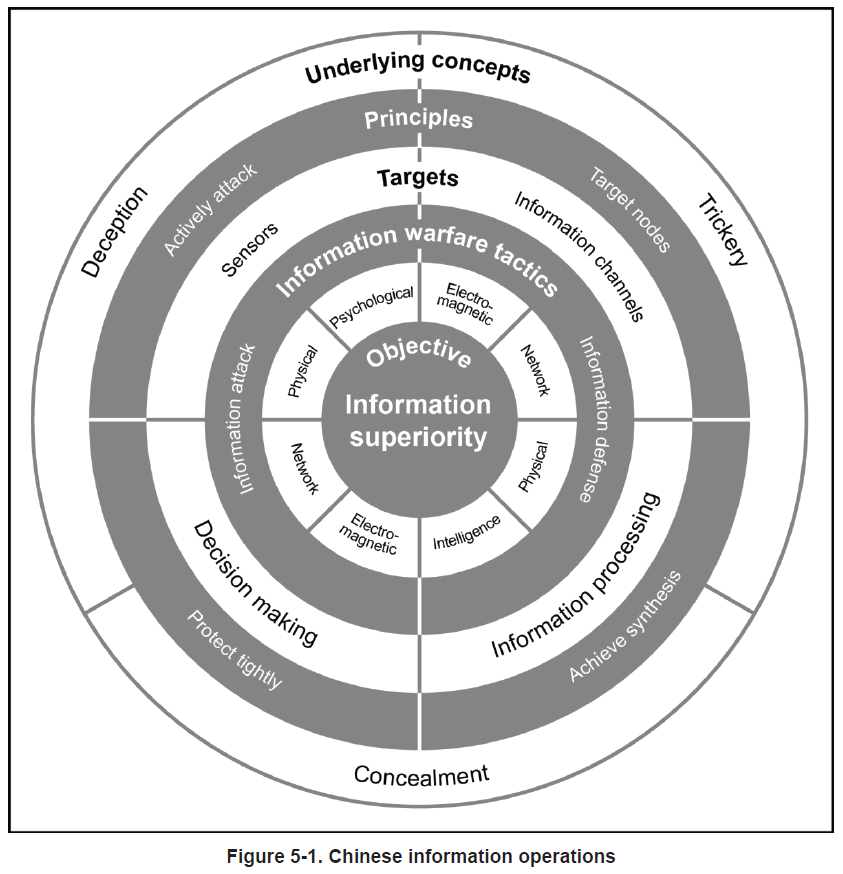