The following documents were obtained from the website of the Cyber Conflict Studies Association.  The documents are draft capabilities based assessments (CBA) of the U.S. Army’s efforts in relation to the cyber/electromagnetic contest, which is defined as the “dimension of full spectrum operations which aims to gain advantage, maintain that advantage, and place adversaries at a disadvantage in the increasingly contested and congested cyberspace domain and electromagnetic spectrum.”

(U//FOUO) Trends in the operational environment continue to indicate that cyberspace and the electromagnetic spectrum (EMS) will remain important entities within the operational environment for the foreseeable future. The Army understands the importance of cyberspace and the electromagnetic spectrum to human societies in general, and to military operations specifically. Army leaders and Soldiers must possess an in-depth understanding of this contest, and how to gain, maintain, and leverage advantages in this contest. To this end, the Army Concept Framework recognizes an increasingly important aspect to military operations: the cyber/electromagnetic contest (C/EM contest).

(U//FOUO) Understanding how to posture the Army to fight the C/EM contest is critical to success on the future battlefield. The Commanding General, Training and Doctrine Command directed the Cyber/Electromagnetic Contest Capabilities Based Assessment (C/EM CBA) to gain a holistic review of the Army‘s required capabilities. The study‘s objective was to identify C/EM requirements across Full Spectrum Operations, then assess capability gaps and potential solutions.

(U//FOUO) This study considered Army echelons that include BCT to Army and Joint echelons. It considered all phases of Joint operations and the ARFORGEN cycle from reset and pre-deployment to deployment through power projection platforms to the theater of operations and addresses requirements from the 2016-2028 timeframe.

(U//FOUO) The C/EM Contest is defined as ―That dimension of full spectrum operations which aims to gain advantage, maintain that advantage, and place adversaries at a disadvantage in the increasingly contested and congested cyberspace domain and electromagnetic spectrum. The C/EM Contest is a holistic, combined arms approach that offers five key ideas:

(U//FOUO) The fundamental objective of the C/EM contest is to establish a network that enables effective Mission Command; then operate and defend it. In conjunction with this primary effort, commanders seek to develop C/EM situational awareness, which enables all aspects of the C/EM Contest. Operations are directed to attack and exploit adversary systems, and to protect friendly individuals and platforms. Support activities underpin these efforts to gain and maintain advantages. 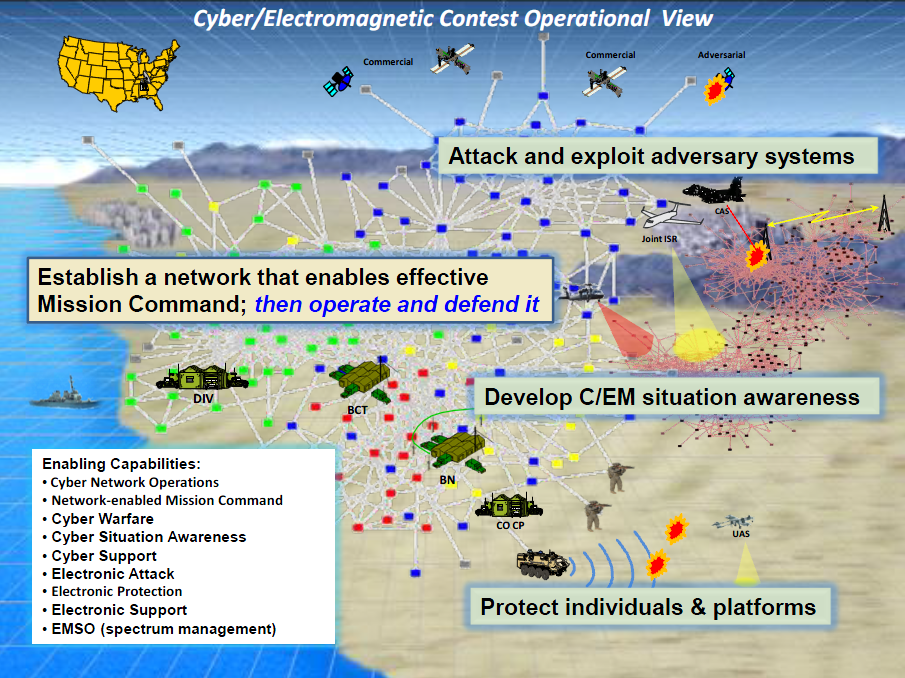