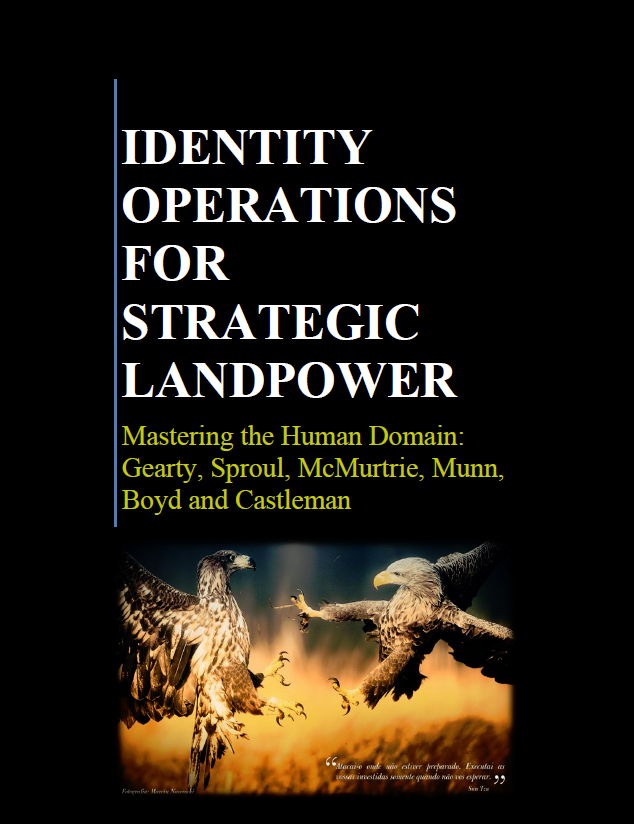 Since the fall of the Berlin Wall, the strategic environment and the corresponding threats to our national security have dramatically changed. No longer are national priorities dominated by superpowers and nation states, but increasingly by loose networks of terrorists, transnational criminals, and other non-state actors within the “human domain.” As we have shifted into the new generation of warfare, the operational environment has evolved into a global operational environment favoring anonymous individuals who easily transform from citizen to enemy and back with limited logistical support or control.

Economic and financial globalization combined with an exponential increase information access and mass communication have set the conditions for a single non-state actor, minimally resourced, capable of dramatic strategic impact. Just as with Archduke Franz Ferdinand’s assassin (Gavrilo Princip), actions of an anonymous individual now, more easily than at any time in recorded history, can change the course of civilization.

Today, Strategic Landpower faces a complex and interconnected global operational environment characterized by a multitude of actors with unknown identities. This presents a wider range of possible threats than encountered before. Our operational environment has fewer well-defined friends and foes with most actors presented along a continuum of: unknown to partially known to known, throughout the range of military operations. Many found in the middle are susceptible to persuasion. Each of these actors has an agenda, often at odds with our objectives, those of other actors, and the goals of the existing political order. Besides a broad range of readily available conventional weapons, state and non-state actors can select from an array of affordable technologies, adapting them to create unexpected and lethal weapons. Social media enables even small groups to mobilize people and resources in ways that can quickly constrain or disrupt operations. This complex operating environment continuously evolves as conditions change and test our ability to innovate and adapt. The complexity reconfirms the imperative to understand, plan, and employ Identity processes and capabilities within land operations.

Starting with operations in Kosovo in 2001 and continuing through OPERATION IRAQI FREEDOM/OPERATION NEW DAWN and OPERATION ENDURING FREEDOM, the range of military operations have continually demonstrated the importance of determining and “owning” an individual’s identity in winning the tactical, operational, and strategic fight. Similarly, functional capabilities supporting force protection, situational awareness, and force application have experienced modifications in execution based on new technologies, such as biometrics and expeditionary forensics. These operations have illustrated the need to dramatically reshape and reengineer the structure, skill set, and tactics, techniques, and procedures of our forces. As we refocus our training from the stability and counterinsurgency environments, it is also important to understand that Identity Activities continue to provide great value in decisive action force-on-force missions. The evolving nature of warfare indicates that adversarial military forces may employ individuals to operate within the local populations, refugees, and detainees to disrupt friendly operations.

Strategic Landpower is at a crossroads. Given the shift in national priorities, the Department of Defnese refocuses its peacetime capabilities and activities toward the human domain in order to neutralize human threats and networks during all phases of military operations. Enabling the disciplined application of Strategic Landpower is providing the identity of organized conventional enemy forces, whether uniformed or not, insurgents, criminals, and other adversaries, or any combination; including their networks. Army forces focus information collection and other intelligence, surveillance, and reconnaissance capabilities on the discovery of true identities, and, through all-source analysis, linking these identities to events, locations, and networks to discern hostile intent.

Providing land force commanders and other decision-makers with robust and enduring Identity capabilities are necessary to combat future threats in these complex environments. Leadership considerations for Identity within the human domain include: