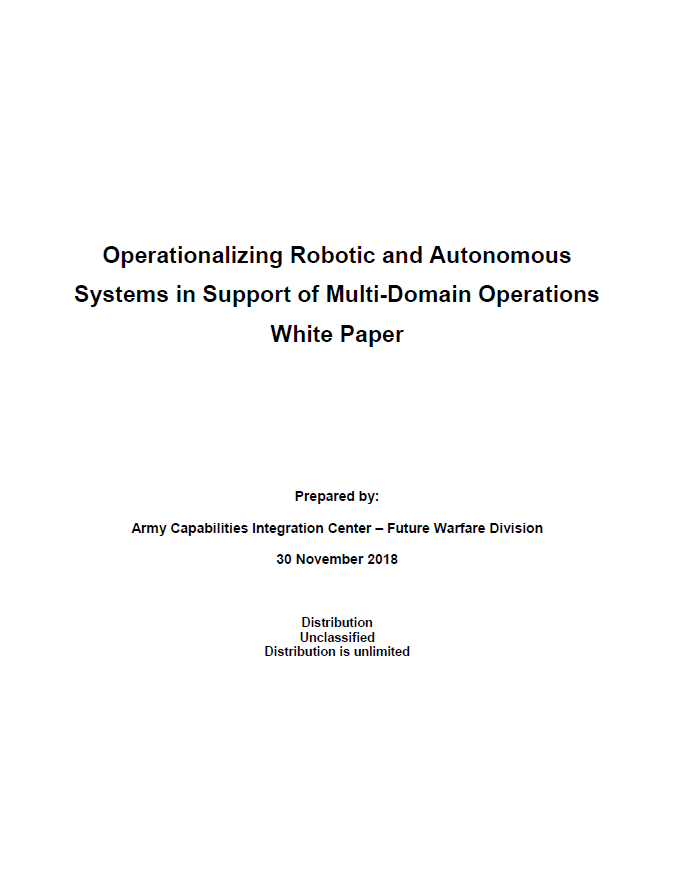 Robotic and Autonomous Systems (RAS) and artificial intelligence (AI) are fundamental to the future Joint Force realizing the full potential of Multi-Domain Operations (MDO 1.5). These systems, in particular AI, offer the ability to outmaneuver adversaries across domains, the electromagnetic (EM) spectrum, and the information environment. The employment of these systems during competition allows the Joint Force to understand the operational environment (OE) in real time, and thus better employ both manned and unmanned capabilities to defeat threat operations meant to destabilize a region, deter escalation of violence, and turn denied spaces into contested spaces. In the transition from competition to armed conflict, RAS and AI maneuver, fires, and intelligence, surveillance, and reconnaissance (ISR) capabilities provide the Joint Force with the ability to deny the enemy’s efforts to seize positions of advantage. Improved sustainment throughput combined with the ability to attack the enemy’s anti-access/aerial denial networks provides U.S. Forces the ability to seize positions of operational, strategic, and tactical advantage. Increased understanding through an AI-enabled joint Common Operating Picture (COP) allows U.S. Forces the ability to orchestrate multi-domain effects to create windows of advantage. Post-conflict application of RAS and AI offer increased capacity to produce sustainable outcomes and the combat power to set conditions for deterrence.

Developing an operational concept for RAS allows the Army to understand better the potential impact of those technologies on the nature and character of war. Describing how Army formations may employ RAS in the future OE helps illustrate its impact on war’s violent, interactive, and fundamentally political nature as well as war’s continuously evolving character. This white paper provides a description of the organizational employment of RAS to inform the potential development of an overarching U.S. Army RAS concept, operational and organizational concepts, formation-based concepts of operation, and system-of-systems or individual system concepts of employment.

During competition, armed conflict, and return to competition formations employ RAS and AI to conduct a number of tasks that support MDO components of the solution enabling Army forces to execute MDO and succeed in the evolving operating environment. The table on the following page aligns key RAS and AI-enabled tasks to three tenets of Multi-Domain Operations to illustrate the expected impact RAS and AI will have on Multi-Domain Operations.

Operationalizing RAS impacts how future forces will operate, conduct operations against adversaries, and how commanders, using military art and science, might employ force capabilities to achieve desired effects and objectives. The most significant issues associated with a future RAS/AI enabled force coalesce around mission command, sustainment, and organizational design. This paper uses the terms mission command and sustainment in a broad sense and not in an effort to assign responsibility to a particular proponent or center of excellence (CoE).

The MDO operational framework transcends the traditional “deep, close, and rear areas” to capture the complexities of the multi-domain environment better. It divides the battlespace into seven areas and accounts for all domains (Figure 1), extending to space and cyberspace, as well as the electromagnetic spectrum and information environment. The mixture of both enemy and friendly capabilities available for use defines these areas. Despite its geometrical depiction, geographic space or relationships do not define the framework. The MDO framework allows commanders to arrange operations and reference Joint Force, partner, adversary, and enemy actions across all domains.

MDO modifies the Joint Concept for Integrated Campaigning’s competition continuum (cooperation, competition below armed conflict, and armed conflict) by focusing the construct on potential adversaries. This modified continuum describes the United States as being in a perpetual state of competition (competition and return to competition) only interrupted by periods of armed conflict. During competition, the adversary’s primary aim is to isolate friendly forces politically to limit an allied response, politically destabilize target states, and achieve objectives below armed conflict. The adversary during competition may already consider itself engaged in a national conflict and employ all elements of national power to achieve its objectives. An adversary primarily relies on reconnaissance, unconventional warfare (UW), and information warfare (IW) forces to achieve these objectives. During armed conflict, the enemy seeks a rapid outcome to limit risk to its forces and civil stability. The enemy will attempt to fragment the employment of Joint Force elements and prevent the deployment of reinforcements. In armed conflict, conventional forces are the main effort supported by UW, IW, and nuclear capabilities.

Widespread violence characterizes the initial stages of the return to competition. The enemy will likely retain significant lethality and occupy some friendly terrain. Enemy action will rely on UW, IW, and potentially nuclear capabilities focused on creating conditions that allow for a negotiated settlement. The Army, as a part of the future Joint Force, will employ RAS in the conduct of MDO to contest adversaries in competition and, when required, defeat them in armed conflict. These operations and activities will take place in the adversary’s homeland, in the close and support areas, and in the continental United States.

All UAS/UGV/UMS and stratospheric/HA platforms controlled through extended range communications networks are subject to spoofing, jamming, and electronic attack. Other vulnerabilities include communications link degradation, environmental effects on the seeker head or sensor array, and kinetic attack. All aircraft are susceptible to surface-to-air and air-to-air interdiction. The ability to generate and/or store power affects the range of the runway-independent unmanned aircraft systems. Meshed sensors are susceptible to weather and environmental conditions that may obscure their sensors.

Weather may limit the operational window for launch and transit to altitude (> 60,000 feet) of the stratospheric/HA platform. Launching the platform during benign conditions in anticipation of later needs can mitigate this vulnerability. Inclement weather can also force the RAS off station or obscure and degrade sensor performance. This platform is slow to move from the launch point in the support zone to its area of utilization.
The AI-enabled active cyber defense capability is vulnerable to compromise or malfunction which could cause a segment of the defensive array to fail. The cyber threat may also evolve or change in ways unaddressed by the autonomous defensive capabilities. Adversaries can employ AI designed to identify and exploit vulnerabilities in algorithms.

The AI systems developed specifically to assist in decision making have a number of vulnerabilities. An AI system’s reliance on data is vulnerable to the tendency of “second wave” systems to form maladaptation based on skewed data. Adversaries can exploit AI’s reliance on data by manipulating or corrupting data. Artificial intelligence is subject to bias based on the quality and accuracy of its source data. Examples of this are indications of racial bias in AI systems employed in the criminal justice system for parole decisions and predictive policing.