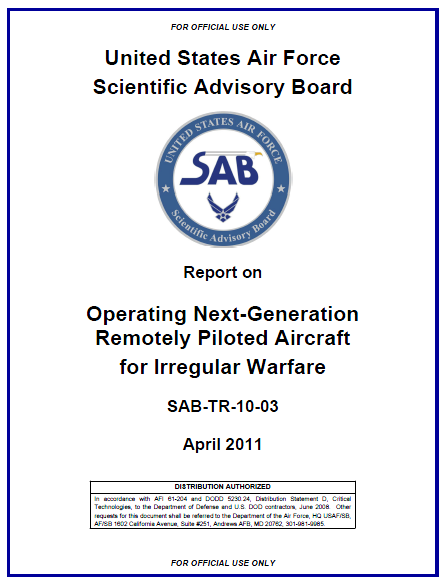 The United States Air Force has long envisioned a strategic role for remotely piloted and autonomous aircraft. As early as May 1896, Samuel Pierpont Langley developed an unpiloted heavier-than-air vehicle which flew over the Potomac River. On V-J Day in August 1945, General Hap Arnold, US Army Air Forces, observed:

“We have just won a war with a lot of heroes flying around in planes. The next war may be fought by airplanes with no men in them at all … Take everything you’ve learned about aviation in war, throw it out of the window, and let’s go to work on tomorrow’s aviation. It will be different from anything the world has ever seen.”

Since these early days, extended range, persistence, precision, and stealth have characterized remotely piloted aircraft (RPA) advancements. RPAs have been employed in multiple combat roles and increasingly contested environments. This year, for the first time in history, the President’s budget proposed a larger investment in RPAs than manned aircraft. A seemingly insatiable operational appetite for RPAs, however, has led to an Air Force manning bottleneck. This is exacerbated by a lack of common ground stations, unsatisfactory integration with civilian and international airspace, and vulnerabilities in communications and command and control links. Further complicating efforts, yet essential in irregular warfare, are directives to minimize civilian casualties. General David Petraeus sees this need as a direct way to support a key center of gravity:

“…We must fight the insurgents, and will use the tools at our disposal to both defeat the enemy and protect our forces. But we will not win based on the number of Taliban we kill, but instead on our ability to separate insurgents from the center of gravity – the people …”

Our Panel conducted an extensive set of visits and received numerous briefings from a wide range of key stakeholders in government, industry, and academia. Taking a human-centered, evidence-based approach, our study seeks to address operational challenges as well as point to new opportunities for future RPAs. That RPAs will be a foundational element of the Air Force’s force structure is no longer debatable. The real question is how to maximize their current and future potential. Our intention is that this study will help provide both vector and thrust in how to do so in the irregular warfare context, as well as other applications.

RPAs are revolutionary surveillance and weapons delivery systems – changing the way the Air Force builds situation awareness and engages enemy forces – but their full potential has yet to be realized. To begin to address this issue, the Air Force initiated this study to review the state-of-the-art in RPA operations, focusing on control and connectivity in an irregular warfare (IW) environment. The Panel was specifically tasked to identify RPA architectures and operational concepts centered on human-systems integration, distributed systems operations, and effective command and control – a cluster of concepts and technologies we subsequently labeled as “mission management” enablers. The Panel was also tasked to recommend mid- to far-term S&T development roadmaps for advancing these technologies to improve the flexibility and capability of RPA operations. The study terms of reference (TOR) identified a number of core issues which were further articulated by the Study Panel to include:

A third issue identified by the Study Panel was collateral damage/fratricide (Figure 2-8). RPAs, originally developed for ISR operations, have become important weapons platforms for tactical and special strike missions in IW. Their expanded use in CAS missions in the future requires technology improvements for mission management to minimize fratricide, collateral damage (CD), and civilian casualties (CIVCAS).
In IW, success requires winning the “hearts and minds” of the population in the face of an adaptable and agile adversary hiding amongst them. A missile fired (e.g. Hellfire missile) from a RPA is no different from a Hellfire missile fired from other platforms like the AH-64 Apache. Causing collateral damage is not an issue unique to RPAs. Data obtained from the Afghanistan AOR17 confirms that insurgents have caused approximately two thirds of CIVCAS. The exact number of CIVCAS caused by US forces was not reported, but an estimate from available data suggests the figure to be less than 10 percent. Of these CIVCAS, approximately half were caused by air-to-ground munitions, but the role of RPAs in these CIVCAS was also not reported. In the majority of these CIVCAS, inadequate acquisition and maintenance of positive target
identification (PID) was the primary cause, and the ability to provide tactical patience during operations would have improved mission success and minimized CIVCAS. In an article by the Washington Post, it was reported that within a recent 15-month period, the CIA conducted 70 RPA strikes using the low collateral damage focused lethality Scorpion weapon, killing 400 terrorists and insurgents while causing 20 CIVCAS. This CIVCAS figure was based on the use of RPAs to conduct pre-strike ISR and post-strike battle damage assessments. Because of precision targeting and focused lethality, CIVCAS is now primarily dependent on the human intelligence and situation awareness upon which the targeting decision is based.

Historically, sensor/data downlinks for some RPAs have not been encrypted or obfuscated. Unencrypted sensor data (e.g., FMV) is beneficial because the downlink is used to feed ROVER systems used by Joint Terminal Attack Controllers (JTAC) and other ground personnel, including uncleared coalition members and contractors. This is a life-saving capability. Nevertheless, not protecting against interception of sensor data has been criticized. “Fixing” this security issue by mandating NSA Type 1 encryption is likely to lead to an unacceptable key management burden because of the large number of users of RPA data that have a wide variety of access rights. However, commercial-grade, NSA-approved cryptography is available (“Suite B”). Commercial cryptography of this kind does not require the same degree of rigor in handling key material and encryption devices, and is not limited in operation to cleared personnel. There is relevant Department of Defense (DOD) activity in this general area.

Encryption has generally been used on C2 messages because the risks associated with compromise are higher (loss of the vehicle), and there is a greatly reduced need for sharing of the C2 data as compared with sensor data. However, crypto issues will likely be exacerbated when doing coalition/joint swarming across platforms that require shared C2 across security domains – a capability that is desired to fully exploit the potential of networked RPA operations.