The following document was obtained from cadetinfo.com, a website for incoming cadets to the U.S. Military Academy at West Point. 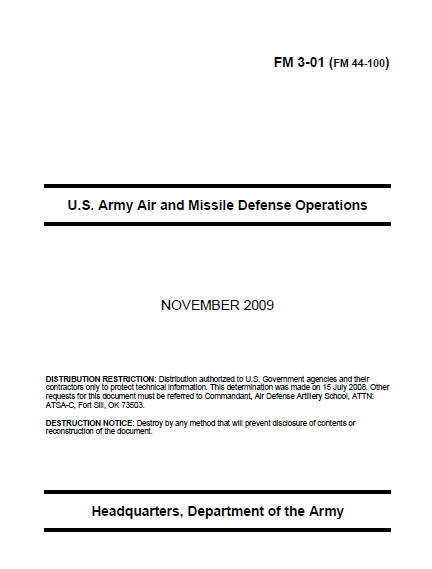 FM 3-01 is the Army Air Defense Artillery’s (ADA) capstone doctrinal publication. The seven chapters that make up this edition of Air and Missile Defense Operations constitute the Army ADA’s view of how it conducts prompt and sustained operations and sets the foundation for developing the other fundamentals and tactics, techniques, and procedures detailed in subordinate field manuals. FM 3-01 also provides operational guidance for commanders and trainers at all echelons.

• Chapter 1 provides a general overview of Army Air and Missile Defense (AMD) operations and the Air Defense Artillery (ADA) mission. The strategic, operational, and tactical levels of war are discussed and AMD operations are defined in terms of their contribution to the Army Operational Concept of Full Spectrum Operations and the Joint Counterair mission.
• Chapter 2 describes the basic concepts inherent in air and missile defense operations which have been developed and improved through many years of operations, both combat and real world deployments. This includes employment principles and guidelines, and engagement operations principles.
• Chapter 3 addresses Command and Control in AMD operations and conforms to Joint Air and Missile Defense doctrine as updated with the lessons learned in Operation Iraqi Freedom (OIF).
• Chapter 4 describes Army Air Defense participation in offensive and defensive operations. Offensive operations aim is to defeat the enemy decisively by using overwhelming, aggressive force. Defensive operations defeat an enemy attack, buy back time, economize forces, and/or develop conditions favorable for offensive operations. Air defense elements protect friendly forces and geopolitical assets and accomplish other missions assigned by the JFC. At the Strategic level of war ADA forces protect high visibility JIIM and national assets, as a layer within the ballistic missile defense system (BMDS) and supports homeland defense operations. At the Operational level of war, ADA forces protect the theater assets based on the JFCs critical asset list (CAL) like, seaports of embarkation, air ports of embarkation, cities, logistic centers, religious centers, and lines of communications (LOC). At the tactical level of war, Army ADA forces support the Land Component Commanders (LCC)/ARFOR scheme of maneuver while protecting Theater, Corps, Division, and Brigade Combat Teams (BCTs) forces according to the JFC’s defended asset list (DAL) priorities.
• Chapter 5 describes the participation of ADA forces in stability operations and civil support operations. Stability operations are conducted outside the U.S. and its territories to promote and protect U.S. national interests. Civil support operations are conducted to address the consequences of natural or manmade disasters, accidents, and incidents within the U.S. and its territories. This chapter describes ADA participation in support of Homeland Security, Homeland Air Security, and counter-drug operations. ADA units may be tasked to provide soldiers and ADA equipment for civil support operations.
• Chapter 6 describes the Army ADA contribution to and benefit from achieving information superiority. Information superiority is the operational advantage derived from the ability to collect, process, and disseminate an uninterrupted flow of information while exploiting or denying an adversary’s ability to do the same. Information superiority is the product of intelligence, surveillance, and reconnaissance (ISR), information management (IM), and information operations (IO). Information superiority enables ADA forces to see first, understand the situation more quickly and accurately, and act faster than their adversaries.
• Chapter 7 discusses the sustainment of Air Defense Artillery (ADA) organizations and the unique challenges to the commanders and staffs of these organizations.

5-25. Civil support is Department of Defense support to U.S. civil authorities for domestic emergencies, and for designated law enforcement and other activities (JP 1-02). Civil support includes operations that address the consequences of natural or man-made disasters, accidents, terrorist attacks, and incidents in the United States and its territories. Army forces conduct civil support operations when the size and scope of events exceed the capabilities or capacities of domestic civilian agencies. Civil support operations are usually noncontiguous. Leaders tailor the application of the operational framework, elements of operational design, and METT-TC to fit each situation. Commanders designate the decisive, shaping, and sustaining operations necessary for mission success. However, identifying centers of gravity, decisive points and even the desired end state can be more complex and unorthodox than in offensive and defensive operations. When visualizing a support operation, commanders recognize that they may have to define the enemy differently. In support operations, the adversary is often disease, hunger, or the consequences of disaster.

5-26. The homeland defense mission for ADA is to prevent, deter, or interdict foreign and domestic aerial threats that are directed towards the United States and its citizens or specified area of operations (AO), such as the National Capitol Region. Nations, terrorist groups, or criminal organizations are increasingly likely to attack the U.S. and its territories using missiles and aircraft.

5-27. The homeland air security (HAS) air and missile threat spectrum Figure 5-1 ranges from traditional military threats to terrorist threats, from medium and long range ballistic missiles, bombers to land attack cruise missiles, terrorist-controlled aircraft, and radio-controlled sub-scale aircraft. The use of an air vehicle as a terrorist weapon is the most stressing HAS threat. State-sponsored military threats are addressed by war plans, operational concepts, and our military’s capabilities. The HAS threat spectrum is depicted
below.

5-28. Government agencies other than the Army will often have the lead in civil support operations. ADA commanders may answer to a civilian chief or may themselves employ the resources of a civilian agency. Command arrangements may often be only loosely defined, causing commanders to seek an atmosphere of cooperation. ADA commanders consider how their actions contribute to initiatives that are also political, economic, and psychological in nature.

5-29. The U.S. Constitution allows the use of Army forces to protect the states against invasion and, upon request of a state, to protect it against domestic violence. Army forces, under joint command, provide the nation with critical capabilities, such as missile defense, necessary to secure and defend the homeland.

5-30. The amended Posse Comitatus Act significantly restricts using federal military forces in law enforcement. The Stafford Act defines and clarifies the role of U.S. military forces in support of domestic civil authorities. Since the law may prohibit certain types of activities, commanders need a detailed analysis of their legal authorities for each mission. Generally, ADA troops and systems performing civil support operations, by the nature of their missions, are in compliance with the law and need only be aware of the limitations of their authority.