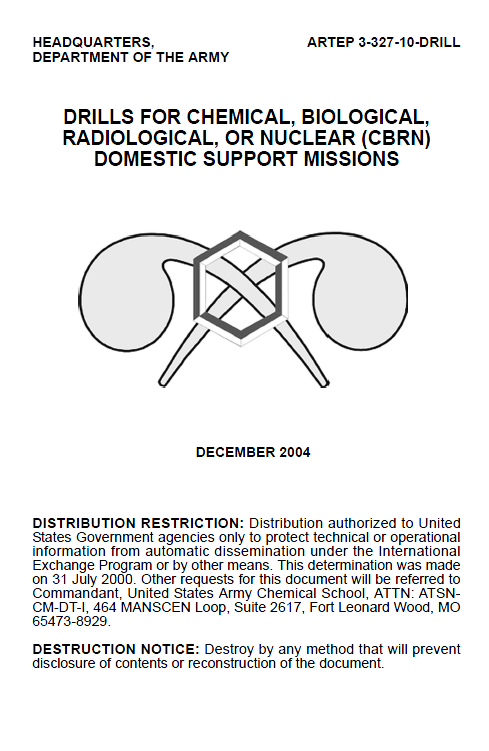 This drill book provides platoon, squad, and team leaders with standardized drills that are designed for use by trainers at the platoon and squad level. Standardized drills are essential to the success of platoon leaders, trainers, and small-unit leaders. These drills provide the performance measures, standards, and sequential procedures that will help guide the unit through training tasks for which doctrine is just now being developed. Chemical Corps platoons and squads must be able to perform these drills quickly, effectively, and to standard at all times.

The target audience for this drill book is Chemical Corps squads and platoons who have been assigned the additional chemical, biological, radiological, and nuclear (CBRN) domestic support mission.

CONDITIONS (CUE): Terrorist acts involving weapons of mass destruction (WMD) are threatened or have occurred. The unit has received an order to alert, recall, and assemble in support of a DRCD mission. The DRCD equipment has been issued and preloaded into shipping containers. The unit receives the order to prepare for the DRCD operations.

NOTE: The medical triage is performed by trained medical personnel and medical support personnel from the local area hospital.

1. The unit establishes medical emergency triage and emergency treatment stations within 30 minutes of receiving the order.

2. Casualties are initially triaged at the medical emergency triage station.

a. Ambulatory casualties are—

b. Nonambulatory casualties are—

b. Conduct an after-action review (AAR) to identify strengths, shortcomings, and corrective actions.

CONDITIONS (CUE): Terrorist acts involving weapons of mass destruction (WMD) are threatened or have occurred. The domestic response casualty decontamination (DRCD) unit is given the mission to establish the nonambulatory clothing removal station.

STANDARDS: Establish the nonambulatory clothing removal station in the hot zone. Equip the station with the proper equipment to remove clothing from the casualty, and equip the contaminated-waste receptacles to receive the contaminated clothing.

CONDITIONS (CUE): Terrorist acts involving weapons of mass destruction (WMD) are threatened or have occurred. Detection and monitoring equipment are on hand. The unit is given the mission to set up the contamination check station.